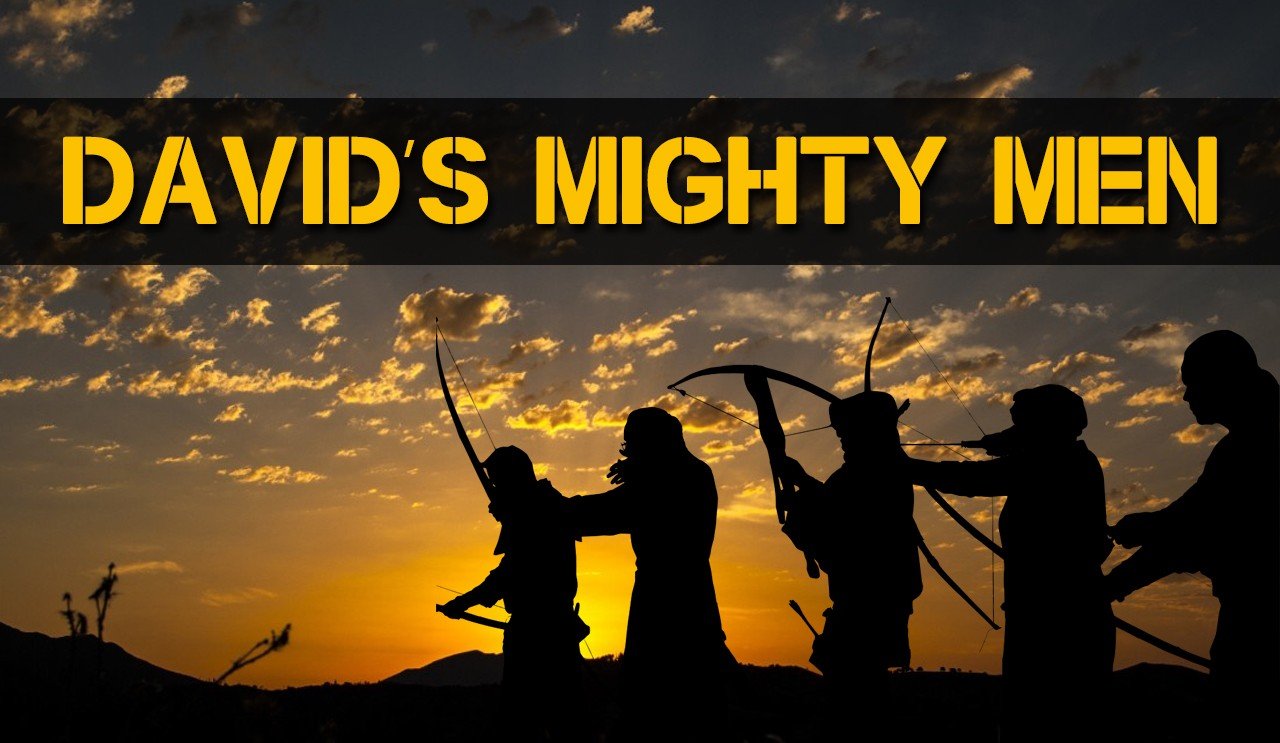 12 Now these are the men who came to David at Ziklag, while he could not move about freely because of Saul the son of Kish. And they were among the mighty men who helped him in war. They were bowmen and could shoot arrows and sling stones with either the right or the left hand; they were Benjaminites, Saul’s kinsmen. The chief was Ahiezer, then Joash, both sons of Shemaah of Gibeah; also Jeziel and Pelet, the sons of Azmaveth; Beracah, Jehu of Anathoth, Ishmaiah of Gibeon, a mighty man among the thirty and a leader over the thirty; Jeremiah, Jahaziel, Johanan, Jozabad of Gederah, Eluzai, Jerimoth, Bealiah, Shemariah, Shephatiah the Haruphite; Elkanah, Isshiah, Azarel, Joezer, and Jashobeam, the Korahites; And Joelah and Zebadiah, the sons of Jeroham of Gedor.

From the Gadites there went over to David at the stronghold in the wilderness mighty and experienced warriors, expert with shield and spear, whose faces were like the faces of lions and who were swift as gazelles upon the mountains: Ezer the chief, Obadiah second, Eliab third, Mishmannah fourth, Jeremiah fifth, Attai sixth, Eliel seventh, Johanan eighth, Elzabad ninth, Jeremiah tenth, Machbannai eleventh. These Gadites were officers of the army; the least was a match for a hundred men and the greatest for a thousand. These are the men who crossed the Jordan in the first month, when it was overflowing all its banks, and put to flight all those in the valleys, to the east and to the west.

And some of the men of Benjamin and Judah came to the stronghold to David. David went out to meet them and said to them, “If you have come to me in friendship to help me, my heart will be joined to you; but if to betray me to my adversaries, although there is no wrong in my hands, then may the God of our fathers see and rebuke you.” Then the Spirit clothed Amasai, chief of the thirty, and he said,

“We are yours, O David,
and with you, O son of Jesse!
Peace, peace to you,
and peace to your helpers!
For your God helps you.”

Then David received them and made them officers of his troops.

Some of the men of Manasseh deserted to David when he came with the Philistines for the battle against Saul. (Yet he did not help them, for the rulers of the Philistines took counsel and sent him away, saying, “At peril to our heads he will desert to his master Saul.”) As he went to Ziklag, these men of Manasseh deserted to him: Adnah, Jozabad, Jediael, Michael, Jozabad, Elihu, and Zillethai, chiefs of thousands in Manasseh. They helped David against the band of raiders, for they were all mighty men of valor and were commanders in the army. For from day to day men came to David to help him, until there was a great army, like an army of God.

These are the numbers of the divisions of the armed troops who came to David in Hebron to turn the kingdom of Saul over to him, according to the word of the LORD. The men of Judah bearing shield and spear were 6,800 armed troops. Of the Simeonites, mighty men of valor for war, 7,100. Of the Levites 4,600. The prince Jehoiada, of the house of Aaron, and with him 3,700. Zadok, a young man mighty in valor, and twenty-two commanders from his own fathers’ house. Of the Benjaminites, the kinsmen of Saul, 3,000, of whom the majority had to that point kept their allegiance to the house of Saul. Of the Ephraimites 20,800, mighty men of valor, famous men in their fathers’ houses. Of the half-tribe of Manasseh 18,000, who were expressly named to come and make David king. Of Issachar, men who had understanding of the times, to know what Israel ought to do, 200 chiefs, and all their kinsmen under their command. Of Zebulun 50,000 seasoned troops, equipped for battle with all the weapons of war, to help David with singleness of purpose. Of Naphtali 1,000 commanders with whom were 37,000 men armed with shield and spear. Of the Danites 28,600 men equipped for battle. Of Asher 40,000 seasoned troops ready for battle. Of the Reubenites and Gadites and the half-tribe of Manasseh from beyond the Jordan, 120,000 men armed with all the weapons of war.

All these, men of war, arrayed in battle order, came to Hebron with a whole heart to make David king over all Israel. Likewise, all the rest of Israel were of a single mind to make David king. And they were there with David for three days, eating and drinking, for their brothers had made preparation for them. And also their relatives, from as far as Issachar and Zebulun and Naphtali, came bringing food on donkeys and on camels and on mules and on oxen, abundant provisions of flour, cakes of figs, clusters of raisins, and wine and oil, oxen and sheep, for there was joy in Israel.

David found himself surrounded by great warriors who were committed to the cause.  As we read here, these men had practiced their skills.  They were tough as nails.  They were determined to see success.  As would be expected with such warriors they were fit for battle and completely sold out to supporting David and serving God.

These were a group of warriors who not only were solid in strength, they had acute judgment and discernment in how they were to respond in the culture of their time.

The reality is we all could use a bit more of such discernment especially as the tides of our culture is continually changing.  There is such importance in our becoming a people who have vision and discernment in our actions.  What used to work in reaching the lost does not work today.  Our insight and weighing in on the ever trends must be evaluated.

That said, I find it important to note verse 18 of how the Holy Spirit came upon Amasai in accomplishing his task and mindset.  It is remarkable to consider how God’s Spirit strengthened these men with the power and ability to follow the course set before them.

We are all called to be warriors for Christ.  We all have been given a mission He desires us to accomplish and victory to be had.  We may be the best suited for such a mission but it is the Lord Jesus and His Spirit who helps us win.  Actively pursue the Spirit of God in your situation.  Seek wisdom and discernment in the times and culture of the situation you face.

The story of David’s mighty men sounds a bit like a Hollywood blockbuster. In Chapter 11, we read the incredible stories of these men. From striking down an 7.5-foot Egyptian giant to wielding a single spear against 300 men, this rag-tag bunch was ready for anything. Here in Chapter 12, we read of even more skilled men who joined David in his raids.

Ziklag had become a critical location for David when he was on the run from Saul. Along with him, men from the tribes of Benjamin, Gad, Judah, and Manasseh rounded out his mighty men. This alone illustrates just how bad the situation had become with Saul’s leadership as these men wanted nothing to do with fighting for him.

One other interesting note about the Benjamites is that they were described as being ambidextrous. The name Benjamin means “son of the right hand” so it was ironic that they were able to function equally with both hands. The Gadites who came and joined David were especially skilled with the shield and the spear and are noted to have faces like lions while possessing swift feet like gazelles.

The point is, God was building an extraordinary team around David. He was providing the firepower for victory. Yes, David could have assembled his own team. However, we all know that when the Lord is moving, He brings along the right people at the right moment in time for whatever task is at hand. This is such a powerful reminder that He already knows the battles of the future and has prepared warriors to join alongside us. The Lord fights for us. He knows the need and will structure a force so powerful that nothing can stand against it!