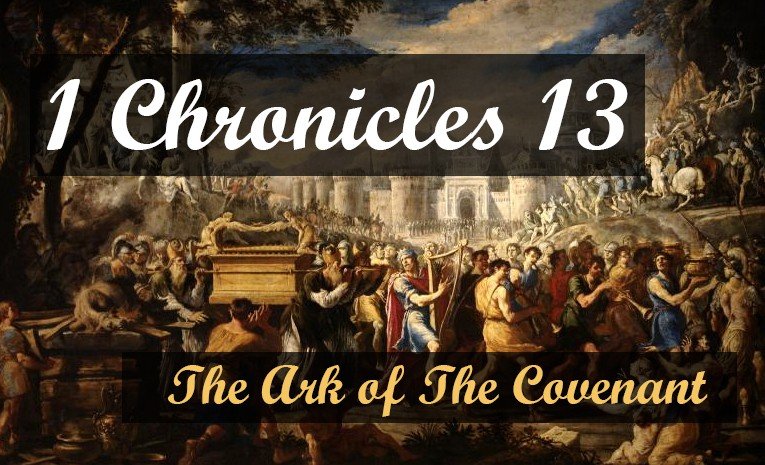 The Ark Brought from Kiriath-Jearim

13 David consulted with the commanders of thousands and of hundreds, with every leader. And David said to all the assembly of Israel, “If it seems good to you and from the LORD our God, let us send abroad to our brothers who remain in all the lands of Israel, as well as to the priests and Levites in the cities that have pasturelands, that they may be gathered to us. Then let us bring again the ark of our God to us, for we did not seek it in the days of Saul.” All the assembly agreed to do so, for the thing was right in the eyes of all the people.

Uzzah and the Ark

So David assembled all Israel from the Nile of Egypt to Lebo-hamath, to bring the ark of God from Kiriath-jearim. And David and all Israel went up to Baalah, that is, to Kiriath-jearim that belongs to Judah, to bring up from there the ark of God, which is called by the name of the LORD who sits enthroned above the cherubim. And they carried the ark of God on a new cart, from the house of Abinadab, and Uzzah and Ahio were driving the cart. And David and all Israel were celebrating before God with all their might, with song and lyres and harps and tambourines and cymbals and trumpets.

And when they came to the threshing floor of Chidon, Uzzah put out his hand to take hold of the ark, for the oxen stumbled. And the anger of the LORD was kindled against Uzzah, and he struck him down because he put out his hand to the ark, and he died there before God. And David was angry because the LORD had broken out against Uzzah. And that place is called Perez-uzza to this day. And David was afraid of God that day, and he said, “How can I bring the ark of God home to me?” So David did not take the ark home into the city of David, but took it aside to the house of Obed-edom the Gittite. And the ark of God remained with the household of Obed-edom in his house three months. And the LORD blessed the household of Obed-edom and all that he had.

Some 400 years before God had instructed Moses to construct the Ark of the Covenant.  Measuring 3 feet 9″ long, 2 feet 3 inches wide and 2 feet three inches high it held the 10 Commandments given to Moses on Mount Sinai, a jar of Manna and Aaron’s rod that had budded.  Completely covered with gold it was also known as the Mercy Seat.   For the past 70 years, it had sat at the house of Abinadab.  David felt compelled to bring this back to Jerusalem.

For all these years the Ark had been neglected.  It was a statement on so many levels of the people of Israel and their own neglect of God.  David’s desire was not only to find God’s blessing where he lived but also bring to the forefront that God must be the center.

There is something to grasp with these thoughts.  Many times we too relegate God away from the center of our thoughts and ways. We make decisions only to ask His blessing on them after.  As David’s heart stirred in making God the center of things with his leadership, he wanted this same statement to be visible to the people.

Neglecting God begins with one small step that grows toward further actions of isolation.  Making excuses for not reading the Word, not spending time in prayer, not attending church will lead toward our neglect of associating with other Believers.  As these build God becomes less important to us.

Keeping Jesus at the center of our lives is hard work.  We all know this.  Schedules, busyness, life itself takes over.  With each slip of something that fosters our relationship so does His importance.

There is a strong theme of unity within the writings of Chronicles. Just as intensely as Saul divided the nation, David began to unify it. Part of that process involved moving the Ark of the Covenant (the presence of God) to David’s headquarters in Jerusalem. It seemed like a good thing. It made sense. All the people were in agreement. There was a massive emotional celebration with song and dance as they carried the Ark toward their political stronghold. But then, something went horribly wrong.

As they carried the Ark, the oxen stumbled, and Uzzah reacted by reaching out to grab it. The Lord’s anger burned and He struck down Uzzah instantly. It’s kind of a bizarre story. It’s easy to assume this was not fair. Why would God do this? What did Uzzah do that was so wrong? Honestly, it’s a narrative that I’ve read many times and struggled with. I don’t know if I have the perfect answer, but I do want to weigh in and try and answer some of these questions.

The first thing we notice at the beginning of this chapter is that David “consults with the commanders of thousands and of hundreds, with every leader.” Scripture clearly states that the decision to move the Ark “was right in the eyes of the people.” This reminds me of the book of Judges where “every man did what was good in his own eyes.” The glaring weakness of this decision was the absence of consulting the Lord.

In Luke 12, we read about the parable of the rich fool. He decides to tear down his small buildings seeking bigger and better structures to house all of his wealth. He doesn’t consult the Lord. Jesus says that night “his soul is required of him.” The man dies and loses everything. His plan, though seemingly wise, was exposed as a waste.

Not every decision is created equal. I believe there are some choices where common sense and morality can guide us successfully. This was not just any decision. This was the holiness of God. It was literally His presence. When God speaks in the Word about His holiness, He makes it perfectly clear that we will fear it. Proverbs tells us “the fear of the Lord is the beginning of wisdom.” The story of Uzzah is a prime example of this.

David was angry, but probably with himself. The text says David was angry that the Lord had broken out against Uzzah. I would speculate he second-guessed his decision to move the Ark without consulting God. It cost a man his life and ultimately the responsibility fell on David. As spiritual leaders of our families and churches, this is a sobering reminder of how we must weigh our desires against the will of God. The consequences of not doing so will not only affect us but all of those who are following our lead.