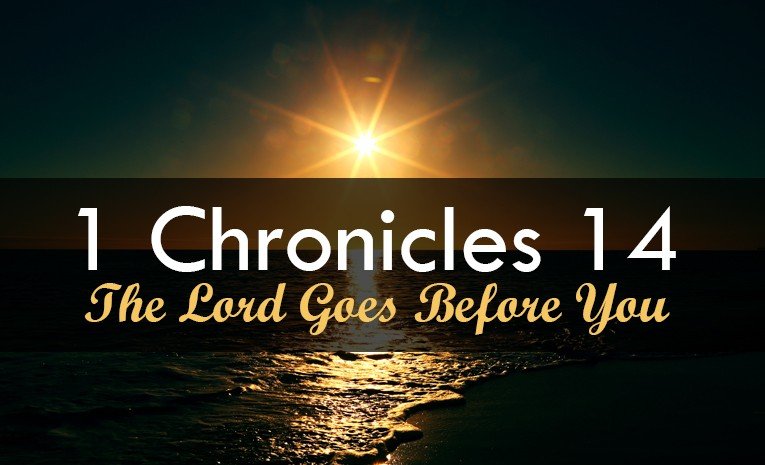 14 And Hiram king of Tyre sent messengers to David, and cedar trees, also masons and carpenters to build a house for him. And David knew that the LORD had established him as king over Israel, and that his kingdom was highly exalted for the sake of his people Israel.

And David took more wives in Jerusalem, and David fathered more sons and daughters. These are the names of the children born to him in Jerusalem: Shammua, Shobab, Nathan, Solomon, Ibhar, Elishua, Elpelet, Nogah, Nepheg, Japhia, Elishama, Beeliada and Eliphelet.

When the Philistines heard that David had been anointed king over all Israel, all the Philistines went up to search for David. But David heard of it and went out against them. Now the Philistines had come and made a raid in the Valley of Rephaim. And David inquired of God, “Shall I go up against the Philistines? Will you give them into my hand?” And the LORD said to him, “Go up, and I will give them into your hand.” And he went up to Baal-perazim, and David struck them down there. And David said, “God has broken through my enemies by my hand, like a bursting flood.” Therefore the name of that place is called Baal-perazim. And they left their gods there, and David gave command, and they were burned.

And the Philistines yet again made a raid in the valley. And when David again inquired of God, God said to him, “You shall not go up after them; go around and come against them opposite the balsam trees. And when you hear the sound of marching in the tops of the balsam trees, then go out to battle, for God has gone out before you to strike down the army of the Philistines.” And David did as God commanded him, and they struck down the Philistine army from Gibeon to Gezer. And the fame of David went out into all lands, and the LORD brought the fear of him upon all nations.

Sometimes you have to hit things head on.  Sometimes what God asks of us is not just to seek Him, inquire of His will, but to take action.  All too often the thought of a head-on confrontation is not something any of us want and so avoid.  Without a head-on direct confrontation, victory will not be found.

The Philistines had been enemies of Israel for years.  Their strong arm of oppression and hate was found at every turn.  Hearing of David being crowned king they once again thought these tactics would work. They were sorely wrong and defeated.  Drawing their strength in numbers and gathering their forces they went to find and take him out.  Ironically, David went directly to them.   Having sought God for guidance and the green light was given, his men attacked and defeated the first wave.  Not to be set back, the Philistines regrouped and tried again.  Once more David sought God, who gave specific direction as to how this battle would be fought (they were to circle around them from behind).  His victory was complete.

The sidelines of battles are comfortable; they’re safe.  We protect ourselves from doing the right thing, taking the right stand.  However, victory is never found on the sidelines.  Whatever situation you are currently battling, or that is even unfolding at the moment – you will not find victory until you act.  Never.

When we believe God is at work, we see His hand moving and shaping things, we must go head-on into battle; the very battlefield God has laid before us.  Seeking God’s guidance and affirmation is key.  Observing the Holy Spirit’s work calls us forward.  Yes, it’s scary.  Yes, it’s something that may be uncomfortable and hard.  Yes, this is a moment of trust but more importantly it’s a moment of action.

What battlefield do you stand upon today?  Where is your position? More importantly, what is the Holy Spirit revealing to you as to how you must respond and what action you are to take?  Victory will not be found until you heed His voice, get off the sidelines and wage the war for victory already promised.

Following on the same theme from 1 Chronicles 13, we now see David correcting his previous error. He engages in two battles against the Philistines. In both situations, he directly consults the Lord before going into the battle. In each situation, the Lord requires a different response. I find that to be mysterious and interesting. Why a different response to the same issue?

In the first battle, David is commanded to engage. He is told to go all in. After the victory, David said, “God has broken through my enemies by my hand, like a bursting flood.” The temptation now would be to become prideful. Although he states that the Lord won the battle, it would be easy to assume that David’s engagement with the army and skill as a commander was where the victory had been won. This was not the case.

In the second battle, David is commanded to wait. The Lord designs a surprise attack, but he tells David exactly how to proceed. This is critical because it would have made sense to use the same strategy that worked the first time. If it ain’t broke, don’t fix it! There was a huge difference though. God wanted to remind David that the Lord fights the battles.

And when you hear the sound of marching in the tops of the balsam trees, then go out to battle, for God has gone out before you to strike down the army of the Philistines.”

I wholeheartedly believe this promise rests on the inquiry David made to God.  He learned from his leadership failure and came back to God. This is a big deal! Just one chapter ago David was angry that the Lord had struck down Uzzah. It would have been easy to disengage or sink lower into sin, but he doesn’t. David wasn’t perfect (as noted in this chapter by all his wives), but he was humble and teachable. He didn’t let his failures define him. We shouldn’t either.