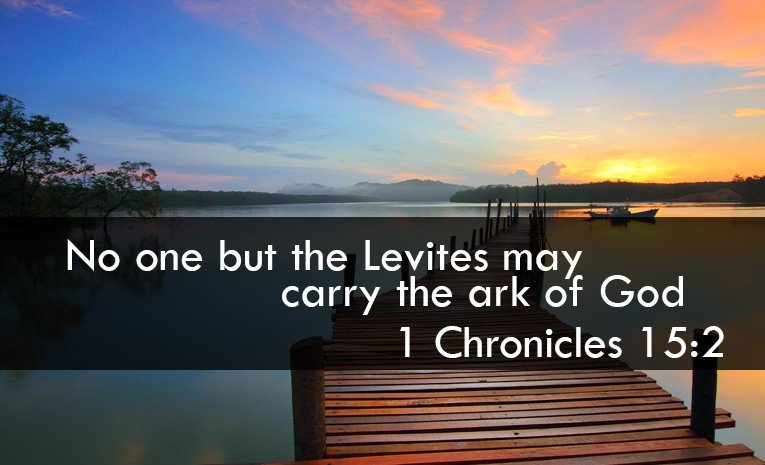 The Ark Brought to Jerusalem

David also commanded the chiefs of the Levites to appoint their brothers as the singers who should play loudly on musical instruments, on harps and lyres and cymbals, to raise sounds of joy. So the Levites appointed Heman the son of Joel; and of his brothers Asaph the son of Berechiah; and of the sons of Merari, their brothers, Ethan the son of Kushaiah; and with them their brothers of the second order, Zechariah, Jaaziel, Shemiramoth, Jehiel, Unni, Eliab, Benaiah, Maaseiah, Mattithiah, Eliphelehu, and Mikneiah, and the gatekeepers Obed-edom and Jeiel. The singers, Heman, Asaph, and Ethan, were to sound bronze cymbals; Zechariah, Aziel, Shemiramoth, Jehiel, Unni, Eliab, Maaseiah, and Benaiah were to play harps according to Alamoth; but Mattithiah, Eliphelehu, Mikneiah, Obed-edom, Jeiel, and Azaziah were to lead with lyres according to the Sheminith. Chenaniah, leader of the Levites in music, should direct the music, for he understood it. Berechiah and Elkanah were to be gatekeepers for the ark. Shebaniah, Joshaphat, Nethanel, Amasai, Zechariah, Benaiah, and Eliezer, the priests, should blow the trumpets before the ark of God. Obed-edom and Jehiah were to be gatekeepers for the ark.

And as the ark of the covenant of the LORD came to the city of David, Michal the daughter of Saul looked out of the window and saw King David dancing and celebrating, and she despised him in her heart.

The school of hard knocks is not a place any of us want to attend.  It’s the place where through mistakes we’ve made, we learn.  These lessons stretch across every spectrum of life.  From our secular work, family life, relational interactions we all make mistakes.  Hopefully, we learn from them.  That’s what this schooling does – forces us to reevaluate many things and correct ourselves.  But the school of hard knocks also is found in our spiritual life.

There are times for all of us we’ve been foolish and made decisions or taken actions which God was not pleased with.  We all can testify how when we’ve acted at some point in our flesh consequences followed.  In such times, you just sat down at the school desk and God is about to give a lesson on how He wants you to behave or act or respond.

There is no doubt, this is grace.  It’s beautiful even though we’ve accrued some scars or wounds through our foolishness.  But thank God He extends grace to us as He calls us forward.

David had learned his lesson.  His first attempt to bring the Ark of the Covenant into Jerusalem was met with disaster.  This chapter reveals David was teachable and desired to do it the right way this time.

You see, God is just as interested in the process as much as He is the end result.

For each of us, this is an important reminder.  God has a way He wants us to follow.  He has a response He desires us to have.  Oh yes, He is very interested in the end result but the process of getting there is just as important to Him.  Whatever decisions or change of actions He’s driving you toward, seek His Word.  Seek Godly instruction.  Seek and follow what He directs.  Act upon these things.

Chapter 16 ends with an interesting and dramatic detail.

And as the ark of the covenant of the LORD came to the city of David, Michal the daughter of Saul looked out of the window and saw King David dancing and celebrating, and she despised him in her heart.

In 1 Samuel 18, David had married Michal during his service in Saul’s court. It was an up and down relationship, mostly because David was constantly on the run from Saul for about 10 years. In 1 Samuel 25, Saul gives Michal to another man. After Saul’s death, and David is anointed king, part of the agreement is that Michal be returned to him. Although this was most likely against her wishes, it was done.

As she sees David celebrating and dancing with all his might, she despises him. There is actually much more to the story as found in 2 Samuel 6.

And David danced before the LORD with all his might. And David was wearing a linen ephod.

And David returned to bless his household. But Michal the daughter of Saul came out to meet David and said, “How the king of Israel honored himself today, uncovering himself today before the eyes of his servants’ female servants, as one of the vulgar fellows shamelessly uncovers himself!” 21 And David said to Michal, “It was before the LORD, who chose me above your father and above all his house, to appoint me as prince over Israel, the people of the LORD, and I will celebrate before the LORD. 22 I will make myself yet more contemptible than this, and I will be abased in your eyes. But by the female servants of whom you have spoken, by them I shall be held in honor.” 23 And Michal the daughter of Saul had no child to the day of her death.

Bitterness. Although David’s heart was to praise the Lord, Michal could not get past her jealousy. She was bitter and resentful and ultimately it affected the rest of her life. This is what sin does when it remains unbroken through repentance. The sin grows and grows as our heart becomes more and more callused. It’s a great reminder of how we must test our feelings against the Lord’s desires. A simple question like, “Why do I hate him so much?” or “Why do I despise him when I see him?” would have gone a long way in determining the source of Michal’s attitude. Though I fail daily, I try and ask myself these same questions!