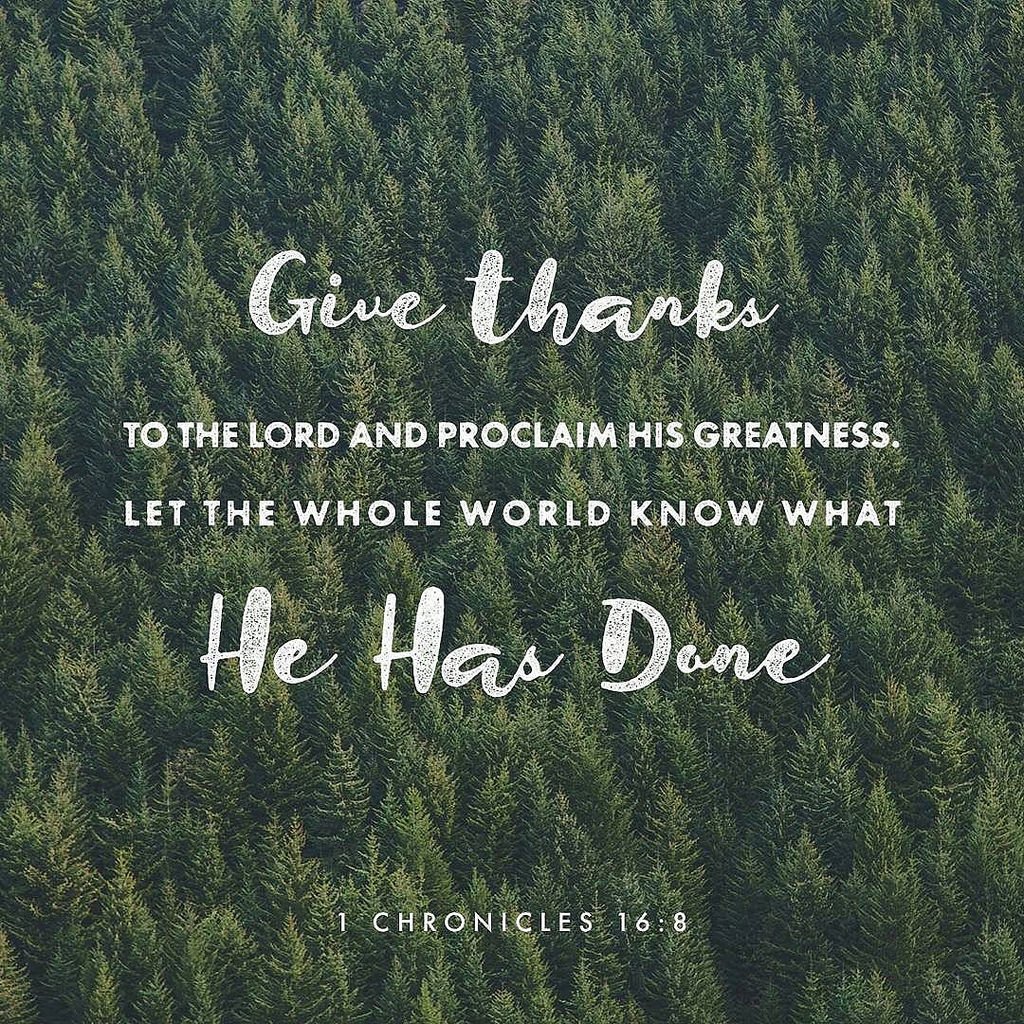 The Ark Placed in a Tent

Then he appointed some of the Levites as ministers before the ark of the LORD, to invoke, to thank, and to praise the LORD, the God of Israel. Asaph was the chief, and second to him were Zechariah, Jeiel, Shemiramoth, Jehiel, Mattithiah, Eliab, Benaiah, Obed-edom, and Jeiel, who were to play harps and lyres; Asaph was to sound the cymbals, and Benaiah and Jahaziel the priests were to blow trumpets regularly before the ark of the covenant of God. Then on that day David first appointed that thanksgiving be sung to the LORD by Asaph and his brothers.

David’s Song of Thanks

Oh give thanks to the LORD; call upon his name;
make known his deeds among the peoples!
Sing to him, sing praises to him;
tell of all his wondrous works!
Glory in his holy name;
let the hearts of those who seek the LORD rejoice!
Seek the LORD and his strength;
seek his presence continually!
Remember the wondrous works that he has done,
his miracles and the judgments he uttered,
O offspring of Israel his servant,
children of Jacob, his chosen ones!
He is the LORD our God;
his judgments are in all the earth.
Remember his covenant forever,
the word that he commanded, for a thousand generations,
the covenant that he made with Abraham,
his sworn promise to Isaac,
which he confirmed to Jacob as a statute,
to Israel as an everlasting covenant,
saying, “To you I will give the land of Canaan,
as your portion for an inheritance.”
When you were few in number,
of little account, and sojourners in it,
wandering from nation to nation,
from one kingdom to another people,
he allowed no one to oppress them;
he rebuked kings on their account,
saying, “Touch not my anointed ones,
do my prophets no harm!”
Sing to the LORD, all the earth!
Tell of his salvation from day to day.
Declare his glory among the nations,
his marvelous works among all the peoples!
For great is the LORD, and greatly to be praised,
and he is to be feared above all gods.
For all the gods of the peoples are worthless idols,
but the LORD made the heavens.
Splendor and majesty are before him;
strength and joy are in his place.
Ascribe to the LORD, O families of the peoples,
ascribe to the LORD glory and strength!
Ascribe to the LORD the glory due his name;
bring an offering and come before him!
Worship the LORD in the splendor of holiness;
tremble before him, all the earth;
yes, the world is established; it shall never be moved.
Let the heavens be glad, and let the earth rejoice,
and let them say among the nations, “The LORD reigns!”
Let the sea roar, and all that fills it;
let the field exult, and everything in it!
Then shall the trees of the forest sing for joy
before the LORD, for he comes to judge the earth.
Oh give thanks to the LORD, for he is good;
for his steadfast love endures forever!

“Save us, O God of our salvation,
and gather and deliver us from among the nations,
that we may give thanks to your holy name
and glory in your praise.
Blessed be the LORD, the God of Israel,
from everlasting to everlasting!”

Then all the people said, “Amen!” and praised the LORD.

Worship Before the Ark

So David left Asaph and his brothers there before the ark of the covenant of the LORD to minister regularly before the ark as each day required, and also Obed-edom and his sixty-eight brothers, while Obed-edom, the son of Jeduthun, and Hosah were to be gatekeepers. And he left Zadok the priest and his brothers the priests before the tabernacle of the LORD in the high place that was at Gibeon to offer burnt offerings to the LORD on the altar of burnt offering regularly morning and evening, to do all that is written in the Law of the LORD that he commanded Israel. With them were Heman and Jeduthun and the rest of those chosen and expressly named to give thanks to the LORD, for his steadfast love endures forever. Heman and Jeduthun had trumpets and cymbals for the music and instruments for sacred song. The sons of Jeduthun were appointed to the gate.

Then all the people departed each to his house, and David went home to bless his household.

Many times neglected within our personal relationship with God, we fail to recall all He has done for us. If we’re honest, so much of the time we’re so caught up in some crisis or difficulty these are the things we think about and unload before Him.  And God wants that.  He wants to see us bring our burdens and worries to Him.  But God also loves and delights in the praise of His people who recognize His hand of work throughout our life.

After so many years of it not being present and lost in battle, the Ark made its way back to the hub of Jerusalem.  The Ark of the Covenant was a tangible representation of God’s presence and placed exactly where it needed to be – at the center of Israel. What followed was a celebration among the people through their worship and sacrifice to Him.  It was a great time of community for the nation.

David took the time to reflect the goodness of God through Psalm.  The beauty of his words given to the Levites was to be sung reflecting their history and God’s presence.  Speaking of the great things God had done for them, it was a psalm of reflection.  Their focus was strictly on God’s ever-present help and direction as a nation.

Take a moment to stroll back through the journey you have been on.  Where has God been faithful? What are the things He has done for you?  Recall the doors of opportunity and provision.  As David wrote so beautifully to the greatness of God, spend some time on these things personally and give thanks.  But more importantly, use this day to proclaim the greatness of God to others.  Tell of His provision.  Speak toward where God has sustained you.  May your heart this day be filled with thanksgiving in all this God of yours has done for you personally.

For great is the LORD, and greatly to be praised, and he is to be feared above all gods.

This statement is not admitting there are other gods but is referencing all the pagan “gods” that were worshiped during Israel’s history. Most other cultures were committed to multiple gods that centered around nature. Agriculture, weather, and fertility were popular among all the other nations. Israel was unique in that they were one of the only nations to recognize and serve the one true living God.

Today not much has changed. People still serve many pagan “gods”. Whether it’s sports, money, sex, fame, food, addictions, or even things like children or good works, these fake idols steal our focus from the one true God. Countless times, God’s people go back to their false gods only to have the consequences reveal what their heart truly loves.

David was setting a precedent by reestablishing the focus on God alone. He led the people in worship and sacrifice. He not only commanded certain things, but he exemplified it with his life. Yes, he was far from perfect, but his leadership modeled service to the Lord. Our desire must be to evaluate where we are serving other gods and redirect our heart towards our Father.