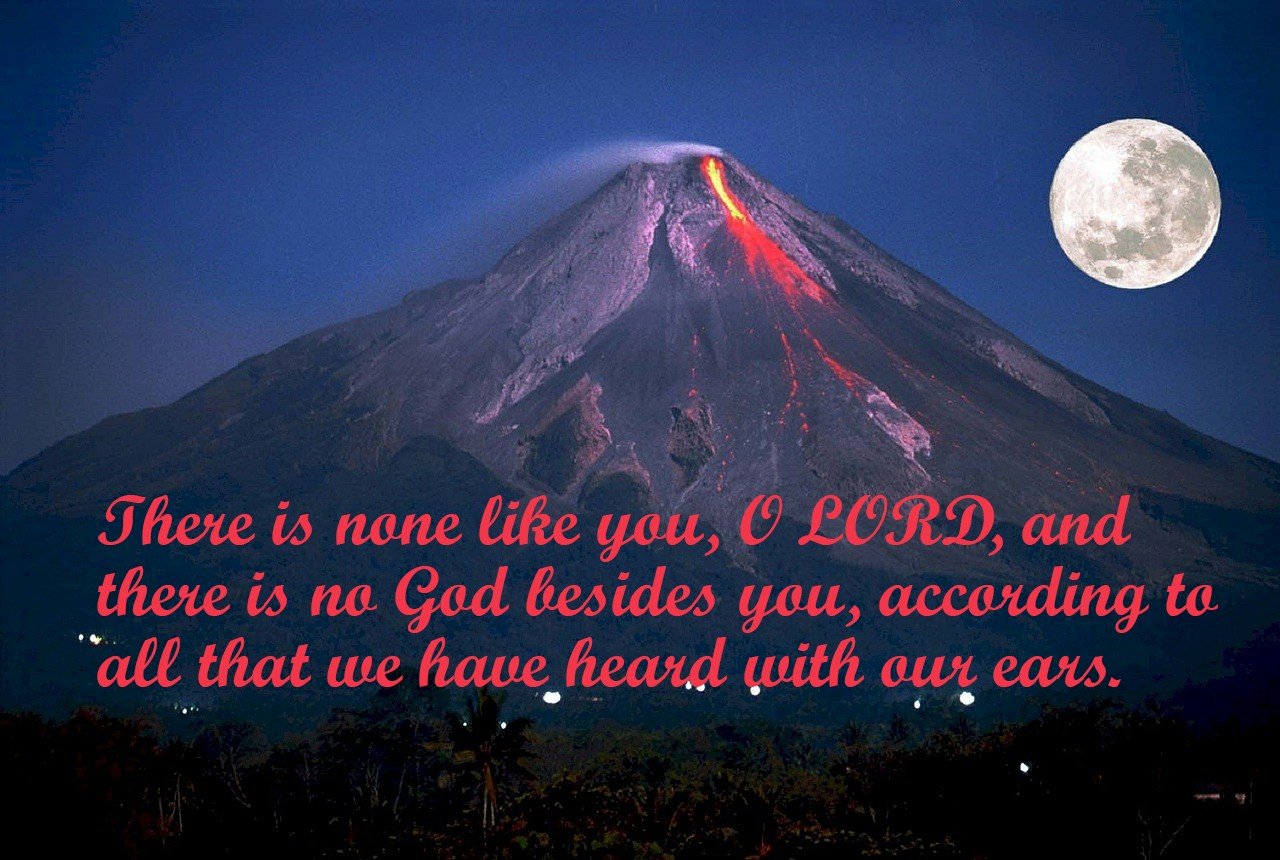 The Lord’s Covenant with David

17 Now when David lived in his house, David said to Nathan the prophet, “Behold, I dwell in a house of cedar, but the ark of the covenant of the LORD is under a tent.” And Nathan said to David, “Do all that is in your heart, for God is with you.”

But that same night the word of the LORD came to Nathan, “Go and tell my servant David, ‘Thus says the LORD: It is not you who will build me a house to dwell in. For I have not lived in a house since the day I brought up Israel to this day, but I have gone from tent to tent and from dwelling to dwelling. In all places where I have moved with all Israel, did I speak a word with any of the judges of Israel, whom I commanded to shepherd my people, saying, “Why have you not built me a house of cedar?”’ Now, therefore, thus shall you say to my servant David, ‘Thus says the LORD of hosts, I took you from the pasture, from following the sheep, to be prince over my people Israel, and I have been with you wherever you have gone and have cut off all your enemies from before you. And I will make for you a name, like the name of the great ones of the earth. And I will appoint a place for my people Israel and will plant them, that they may dwell in their own place and be disturbed no more. And violent men shall waste them no more, as formerly, from the time that I appointed judges over my people Israel. And I will subdue all your enemies. Moreover, I declare to you that the LORD will build you a house. When your days are fulfilled to walk with your fathers, I will raise up your offspring after you, one of your own sons, and I will establish his kingdom. He shall build a house for me, and I will establish his throne forever. I will be to him a father, and he shall be to me a son. I will not take my steadfast love from him, as I took it from him who was before you, but I will confirm him in my house and in my kingdom forever, and his throne shall be established forever.’” In accordance with all these words, and in accordance with all this vision, Nathan spoke to David.

Then King David went in and sat before the LORD and said, “Who am I, O LORD God, and what is my house, that you have brought me thus far? And this was a small thing in your eyes, O God. You have also spoken of your servant’s house for a great while to come, and have shown me future generations, O LORD God! And what more can David say to you for honoring your servant? For you know your servant. For your servant’s sake, O LORD, and according to your own heart, you have done all this greatness, in making known all these great things. There is none like you, O LORD, and there is no God besides you, according to all that we have heard with our ears. And who is like your people Israel, the one nation on earth whom God went to redeem to be his people, making for yourself a name for great and awesome things, in driving out nations before your people whom you redeemed from Egypt? And you made your people Israel to be your people forever, and you, O LORD, became their God. And now, O LORD, let the word that you have spoken concerning your servant and concerning his house be established forever, and do as you have spoken, and your name will be established and magnified forever, saying, ‘The LORD of hosts, the God of Israel, is Israel’s God,’ and the house of your servant David will be established before you. For you, my God, have revealed to your servant that you will build a house for him. Therefore your servant has found courage to pray before you. And now, O LORD, you are God, and you have promised this good thing to your servant. Now you have been pleased to bless the house of your servant, that it may continue forever before you, for it is you, O LORD, who have blessed, and it is blessed forever.”

Sometimes good intentions, pure ones even, are not part of the timing of God at that moment. There’s a valuable lesson to grasp here and a look at attitudes that are humble instead of irritated when God says, “Not yet.”

David has settled into his leadership.  His palace built, his life which had been for decades on the run in many instances was at a daily flow.  More importantly, the Ark of the Covenant held a place in the city. God was there and with him.

But something began to bother David.  While he lived in a beautiful dwelling, the Ark was in a tent.  He wanted to construct a structure to honor God and hold the Ark.  Makes sense.  In fact, Nathan the prophet agreed and stated to go for this dream.  It was a right and pure desire, just the timing was not of God.

And what I see are two men who are humble of heart enough to be corrected and redirected. Nathan was presumptuous in his words of going forward.  He answered with a human perspective that seemed right but was not based upon God’s plan and more importantly, God’s Word.

The correction of this was swift from God who gave instruction as to when a physical temple would be built.  He humbled himself before God’s correction of speaking before knowing and then had the task of going to David to tell him what the Lord had said.  For David, we read of a humble heart as well.  He received this word in fact with praise.  But this meant one thing, his dream was sidelined.  The timing not of God he accepted the reality.

I think the lesson here for all of us is in two pieces.  We must always seek God’s will in a situation even when it comes down to things that seem right.  We don’t know His ultimate plan and timing.  We must seek before we respond.  The second piece which is tougher is to receive in those times when God says, “Not yet” and not plow ahead.

In all, we say and do we must live toward the glory of God.  This involves heeding His word, accepting His timing, and humbly submitting to how He has directed.

I am drawn to David’s actions over the second half of this chapter. As I read, I found myself wondering, “Do I do that?” After petitioning the Lord about building a temple, it is revealed that David’s son (Solomon) will be the one who builds a permanent structure. This was an answer that brought David much joy. Not only this, but God promises to be with Solomon.

I will be a father to him, and he will be a son to Me. I will not take away My faithful love from him as I took it from the one who was before you.

David immediately goes into prayer thanking the Lord for his answer. The question I have is, do we do this? Is this action part of our relationship with God? David praises God from his heart. He takes time out of the day to honor and thank the source of all blessings. My thought for today is really that simple – do we do that?

If I’m honest, the answer is “not often enough.” I take blessings for granted. I complain. I worry. I go about my day with an attitude of “whatever happens, happens.” This was not David’s response. He exalted the Lord from the deepest part of his being. He spent time showing God just how much this blessing meant to him. I want to be like that. We all need to be like that.  In a culture that spends more time focused on what we don’t have than what we do, let’s agree to be thankful today.