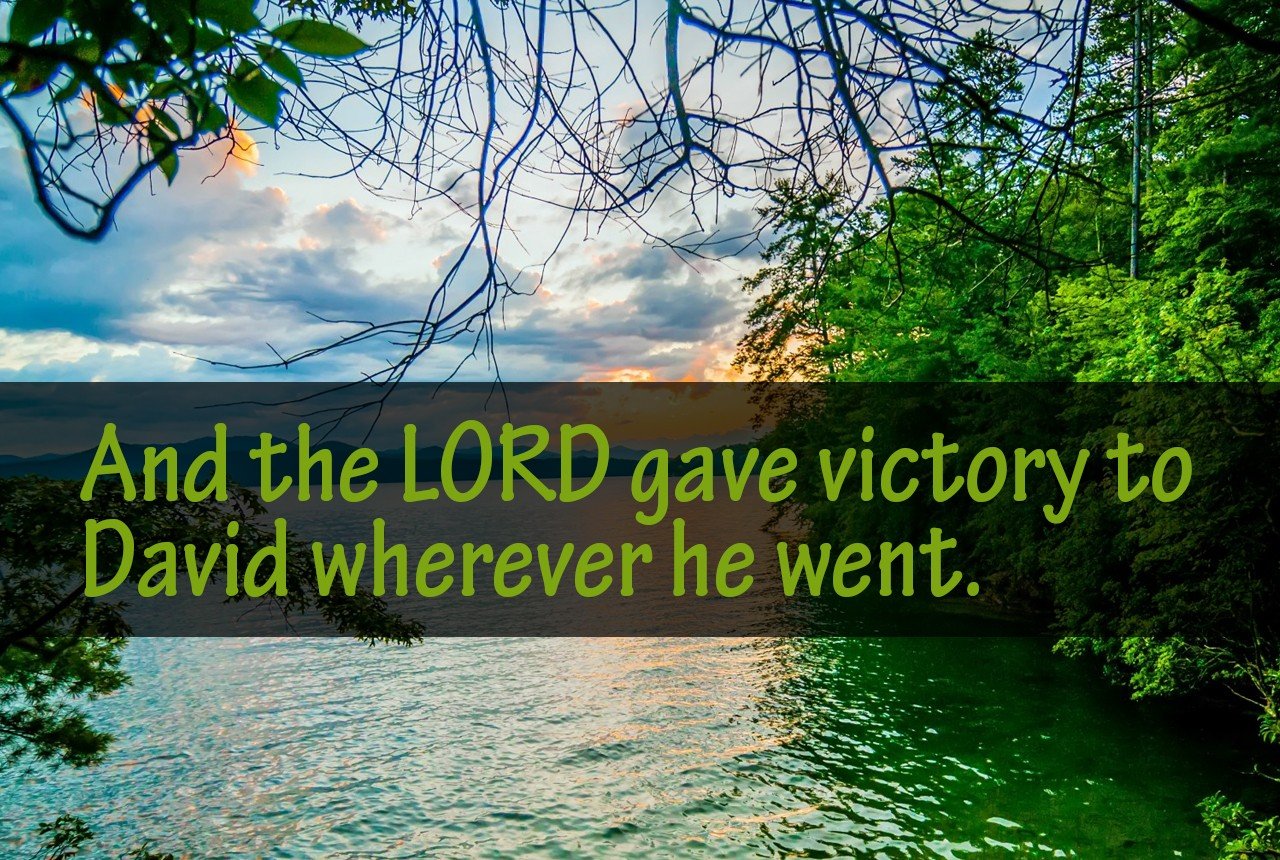 And he defeated Moab, and the Moabites became servants to David and brought tribute.

David also defeated Hadadezer king of Zobah-Hamath, as he went to set up his monument at the river Euphrates. And David took from him 1,000 chariots, 7,000 horsemen, and 20,000 foot soldiers. And David hamstrung all the chariot horses, but left enough for 100 chariots. And when the Syrians of Damascus came to help Hadadezer king of Zobah, David struck down 22,000 men of the Syrians. Then David put garrisons in Syria of Damascus, and the Syrians became servants to David and brought tribute. And the LORD gave victory to David wherever he went. And David took the shields of gold that were carried by the servants of Hadadezer and brought them to Jerusalem. And from Tibhath and from Cun, cities of Hadadezer, David took a large amount of bronze. With it Solomon made the bronze sea and the pillars and the vessels of bronze.

When Tou king of Hamath heard that David had defeated the whole army of Hadadezer, king of Zobah, he sent his son Hadoram to King David, to ask about his health and to bless him because he had fought against Hadadezer and defeated him; for Hadadezer had often been at war with Tou. And he sent all sorts of articles of gold, of silver, and of bronze. These also King David dedicated to the LORD, together with the silver and gold that he had carried off from all the nations, from Edom, Moab, the Ammonites, the Philistines, and Amalek.

And Abishai, the son of Zeruiah, killed 18,000 Edomites in the Valley of Salt. Then he put garrisons in Edom, and all the Edomites became David’s servants. And the LORD gave victory to David wherever he went.

So David reigned over all Israel, and he administered justice and equity to all his people. And Joab the son of Zeruiah was over the army; and Jehoshaphat the son of Ahilud was recorder; and Zadok the son of Ahitub and Ahimelech the son of Abiathar were priests; and Shavsha was secretary; and Benaiah the son of Jehoiada was over the Cherethites and the Pelethites; and David’s sons were the chief officials in the service of the king.

There is an enemy of our soul that longs to take the territory of the redeemed back.  He works tirelessly to bring skirmishes and outbreaks of war that place us as soldiers of Jesus Christ in situations where we question our faith, give up from exhaustion or simply want to stop fighting.  His work is cunning, his battle plans effective at times – he attacks relentlessly.

But there is a call to arms of us who follow Jesus.  Stand firm.  Do not be swayed by the outbreak of war against you.  Do not give in to the enemies attacks but hold your ground.  Do not give up what Jesus has helped you win.  The absolute key to all of this is we are in tune with Jesus every single day.  We must go before Him for the strength His Spirit can give us no matter what we face.  More importantly, we must surrender ourselves to His plan and not our own.

Victory after victory is recorded of David after he took the throne.  The list is astounding in his conquest and subduing the enemy.  One such we read was the ever-present thorn of the Philistines.  When David became king the Philistines were taking the territory from God’s people.  It was under the reign of David, the people finally began to take their territory back from the enemy of the Philistines.

For so many of us, this mirrors what we face.  The enemy has taken territory for years of our lives.  We must recognize this is happening.  We must buckle down to the things that matter and rely on our King who is just and fair and will be victorious.  Be encouraged today with whatever battle you face.  As a Believer in Jesus, it may seem the enemy is winning but the true victory is found even in just the name of Jesus.  Do not give back what He has redeemed.  Do not give up the ground of which you stand.  Be battle-ready and ready for what our Commander calls of us.

So David reigned over all Israel, and he administered justice and equity to all his people.

After reviewing all of David’s mighty conquests, the text pivots and reflects on what David was doing internally. We are all familiar with David the warrior. From the battle with Goliath throughout the rest of his life as King, the stories go on and on. However, David was more than just a warrior. He cared for his people.

Those who fear the Lord and are wise in their ways do what they ought to do. There is obedience on all levels. Notice, I said obedience, not perfection. David emotionally praised the Lord through psalms and hymns. He was a great friend to those in need (i.e. the story of Mephibosheth). He consulted the Lord over and over on behalf of the people.

I believe David had a strong desire to lead the people back to God and this is a strong point. It’s easy to get swept away by the accomplishments. It’s so tempting for us to identify David’s main desire for Israel to involve conquering other nations and increasing in stature. From a narrative standpoint, I think there were many things David did for his nation outside of his battles. His heart was to lead people back to the worship of their God.