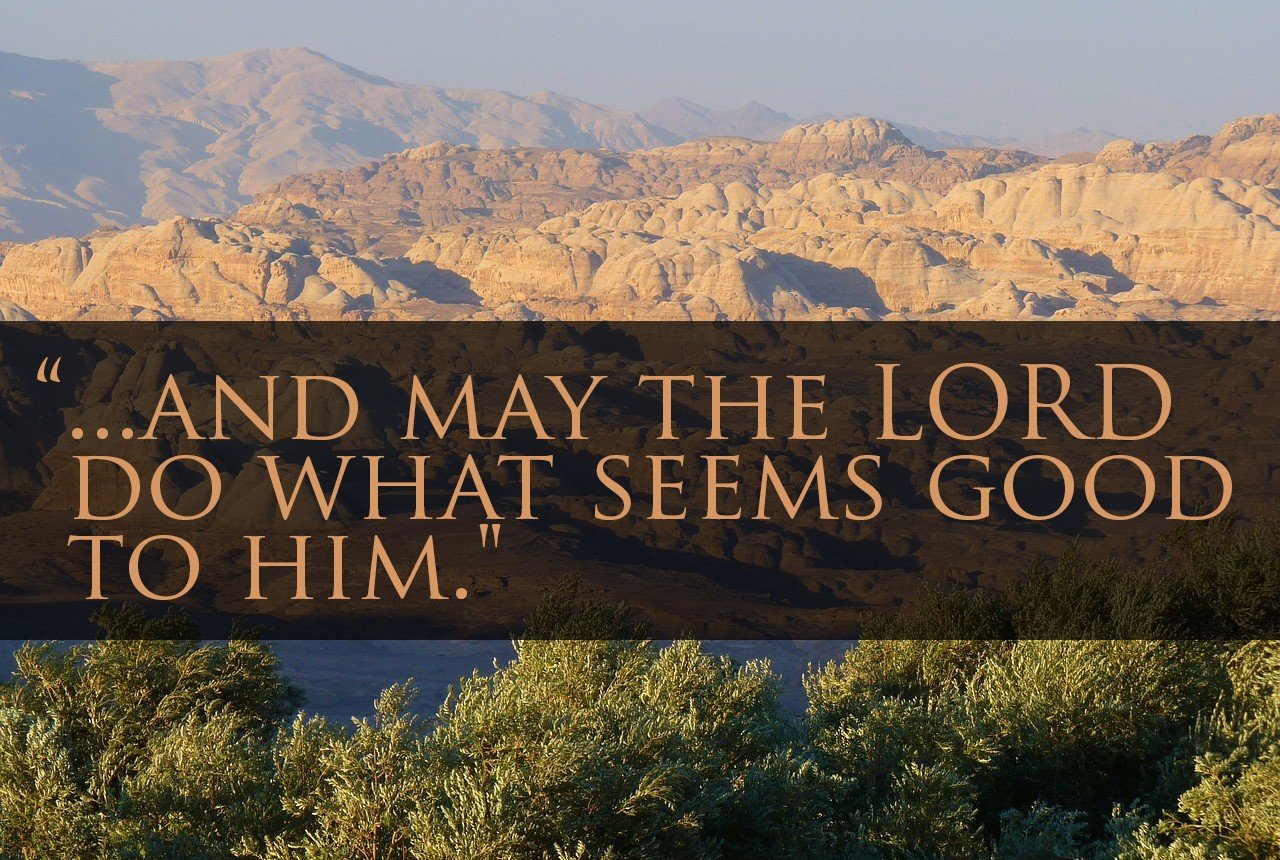 19 Now after this Nahash the king of the Ammonites died, and his son reigned in his place. And David said, “I will deal kindly with Hanun the son of Nahash, for his father dealt kindly with me.” So David sent messengers to console him concerning his father. And David’s servants came to the land of the Ammonites to Hanun to console him. But the princes of the Ammonites said to Hanun, “Do you think, because David has sent comforters to you, that he is honoring your father? Have not his servants come to you to search and to overthrow and to spy out the land?” So Hanun took David’s servants and shaved them and cut off their garments in the middle, at their hips, and sent them away; and they departed. When David was told concerning the men, he sent messengers to meet them, for the men were greatly ashamed. And the king said, “Remain at Jericho until your beards have grown and then return.”

When the Ammonites saw that they had become a stench to David, Hanun and the Ammonites sent 1,000 talents of silver to hire chariots and horsemen from Mesopotamia, from Aram-maacah, and from Zobah. They hired 32,000 chariots and the king of Maacah with his army, who came and encamped before Medeba. And the Ammonites were mustered from their cities and came to battle. When David heard of it, he sent Joab and all the army of the mighty men. And the Ammonites came out and drew up in battle array at the entrance of the city, and the kings who had come were by themselves in the open country.

When Joab saw that the battle was set against him both in front and in the rear, he chose some of the best men of Israel and arrayed them against the Syrians. The rest of his men he put in the charge of Abishai his brother, and they were arrayed against the Ammonites. And he said, “If the Syrians are too strong for me, then you shall help me, but if the Ammonites are too strong for you, then I will help you. Be strong, and let us use our strength for our people and for the cities of our God, and may the LORD do what seems good to him.” So Joab and the people who were with him drew near before the Syrians for battle, and they fled before him. And when the Ammonites saw that the Syrians fled, they likewise fled before Abishai, Joab’s brother, and entered the city. Then Joab came to Jerusalem.

But when the Syrians saw that they had been defeated by Israel, they sent messengers and brought out the Syrians who were beyond the Euphrates, with Shophach the commander of the army of Hadadezer at their head. And when it was told to David, he gathered all Israel together and crossed the Jordan and came to them and drew up his forces against them. And when David set the battle in array against the Syrians, they fought with him. And the Syrians fled before Israel, and David killed of the Syrians the men of 7,000 chariots and 40,000 foot soldiers, and put to death also Shophach the commander of their army. And when the servants of Hadadezer saw that they had been defeated by Israel, they made peace with David and became subject to him. So the Syrians were not willing to save the Ammonites anymore.

Ever heard the saying, “The cover-up is worse than the crime”?  This statement always refers to something done that was wrong but the guilty party covers up with lies or digs their heels in never admitting they were wrong, or simply are defiant in the face of the accusations.

The land of Ammon was east of Israel.  The nation and people had its beginnings from a strange story of desperateness and sex.  When Sodom and Gomorrah were destroyed, Lot and his family fled.  Lot’s wife chose to look back at the destruction God brought down upon these cities and was killed.  Eventually, Lot and his daughters sought refuge in a cave where they would dwell.  Fearing the worst both girls got their father drunk on separate nights, slept with him becoming pregnant.  The older would give birth to a son whom she named Moab. He eventually became the head of the Moabites.  The younger gave birth to a son and named him Ben-Ammi who would, in turn, become the father of the Ammonite nation.

The Ammonites loathed Israel and grew in strength during the period of the Judges.  A constant thorn, driven by hatred, they assaulted Israel any chance they could.  It would only be under David’s rule they were finally quashed.  Most interestingly their downfall began with grace.

The leader of the Ammonite nations father had died.  David sent a delegation to offer sympathy.  Instead, it was met with suspicion and treachery.  King Hunan humiliated the men who came to offer condolences.  David’s act of grace was slapped down hard.  David moved swiftly.

Instead of admitting any misgiving or mistake made, refusing to ask forgiveness for his misread and actions, he dug his feet in.  The cover-up was worse than the crime.   Failing to admit any wrong they sent money to hire mercenaries to come protect them as they were weak in military strength.   They knew they were wrong but refused to admit it.

Sadly we can be a lot like this man.  We know we’ve offended someone.  We know we have taken a misstep.  Refusing to humble ourselves and ask forgiveness, admit our wrong, we become defensive and offensive.  This not only is destructive to ourselves but destructive to relationships that are important.

The Ammonites strategy was to force David’s army between two enemy forces.  The Israelites were stationed between the Aramean armies and the city of Rabbah. This meant that when the Ammonites attacked, there was no room to retreat because the Syrians were behind them. The Syrians were mercenaries and most likely not committed to the battle at hand. They were simply looking for an opportunity.

David’s military commander, Joab, comes up with a strategy to fight both forces. He splits up the mighty men among himself and his brother Abishai. Joab fights the Syrians while Abishai fights the Ammonites. They agree that if either is overwhelmed, they will help the other with their battle. Then Joab makes this statement…

“Be strong, and let us use our strength for our people and for the cities of our God, and may the LORD do what seems good to him.”

May the Lord do what seems good to him. This was not an admission of defeat, but a faithful statement that the battle is ultimately the Lord’s. Joab was putting forth maximum human effort while understanding that God will ultimately control the outcome. In the end, both enemies are defeated. The Syrians fled and left the Ammonites defenseless before the powerful Israelite army.

This battle was important for many reasons. The Syrians, who were paying tribute to Zobah (Syrian nation) began paying tribute to David and Israel. No longer would the Syrians be allied with the Ammonites or threats to Israel. Now that David had conquered everything from Aram Maachah to the Euphrates River, he controlled the boundaries of land promised by the Abrahamic convenant in Genesis 15.