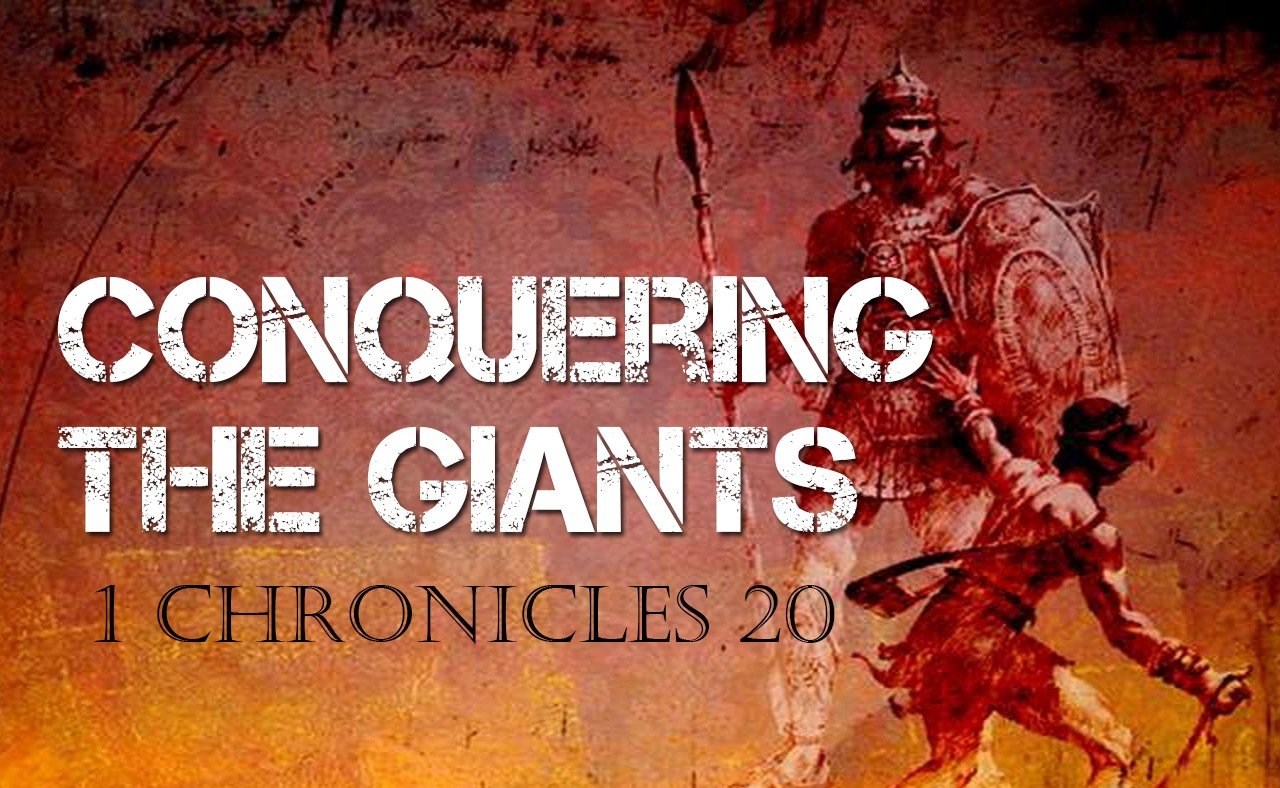 The Capture of Rabbah

20 In the spring of the year, the time when kings go out to battle, Joab led out the army and ravaged the country of the Ammonites and came and besieged Rabbah. But David remained at Jerusalem. And Joab struck down Rabbah and overthrew it. And David took the crown of their king from his head. He found that it weighed a talent of gold, and in it was a precious stone. And it was placed on David’s head. And he brought out the spoil of the city, a very great amount. And he brought out the people who were in it and set them to labor with saws and iron picks and axes. And thus David did to all the cities of the Ammonites. Then David and all the people returned to Jerusalem.

And after this there arose war with the Philistines at Gezer. Then Sibbecai the Hushathite struck down Sippai, who was one of the descendants of the giants, and the Philistines were subdued. And there was again war with the Philistines, and Elhanan the son of Jair struck down Lahmi the brother of Goliath the Gittite, the shaft of whose spear was like a weaver’s beam. And there was again war at Gath, where there was a man of great stature, who had six fingers on each hand and six toes on each foot, twenty-four in number, and he also was descended from the giants. And when he taunted Israel, Jonathan the son of Shimea, David’s brother, struck him down. These were descended from the giants in Gath, and they fell by the hand of David and by the hand of his servants.

They were known as giants.  Descendants of Rapha, literally meaning giants, they had been in Canaan long before even Abraham.  Famous for their height and strength they were a force to be reckoned with. Goliath had been killed by David as a young boy.  Some of these mentioned here who were taken down were Goliath’s brothers.

Although this war had David missing as he stayed in Jerusalem, his men were able to win the battles against such phenomenon of men.  Heroic on many levels they met their foes with the strength of God. The beauty is David had set the bar of such trust as a young one when he was the only who believed enough God would help him slay Goliath.  God raised up leaders who continued.  And although David sinned with Bathsheba during this time, we realize how his legacy was not just in leadership or humility when he repented for such sin – there was something else.  He instilled in these who followed a preparedness to move forward.  These men learned victory through David’s example.

There’s a lot to be said about legacy.  We all leave one.  Whether good or bad, the life we live is played out long after we’re gone.  People are watching and taking note.  They are gathering thought as to how much we trust in our God, live out that trust even in our failures.  Our faithfulness to God is important not only in our relationship with Him but also speaks into the lives of others.  Our lives today not only bring about present victories but pass onto following generations.

“In the spring of the year…”

Great military conquests were routinely conducted in the springtime. Most often, it would be late spring, when the rains had subsided and the dry warmth of summer was nearing. Another key reason for the springtime attacks involved the harvest. The barley and wheat would be far enough along that men of military age would be free to go out to battle.

After the conquest of Syria, Joab turned his full attention to the Ammonites. The city of Rabbah would be next on their list. We read that David stayed in Jerusalem, a choice many have argued was a mistake.  It would be during this time he would fall to adultery with Bathsheba. With everything going so well in Israel, what happened?

I recently read a study of sports fans that concluded the closer you feel affiliated with a group, the more moral leniency you are willing to allow. I don’t know if this happened to David, but it’s certainly possible. He was at the height of his legacy during a time when God was allowing Israel to conquer all of their enemies. It was as if Israel could do no wrong… until this.

Unfortunately, the same is true for us. I know for me, when things are going great, I tend to become more comfortable and complacent. I let things slide more and rely on myself. When things get rough, I go running back to God. It’s a reality check. Maybe this is exactly what David needed?

We must continually be reminded not to take our blessings for granted. We also must be continually reminded that God is concerned with our growth, not our comfort. During times of great blessing, be thankful because those blessings only come from God. During great times of struggle, be thankful, because that struggle will break you down and build you back up to be used by Jesus.