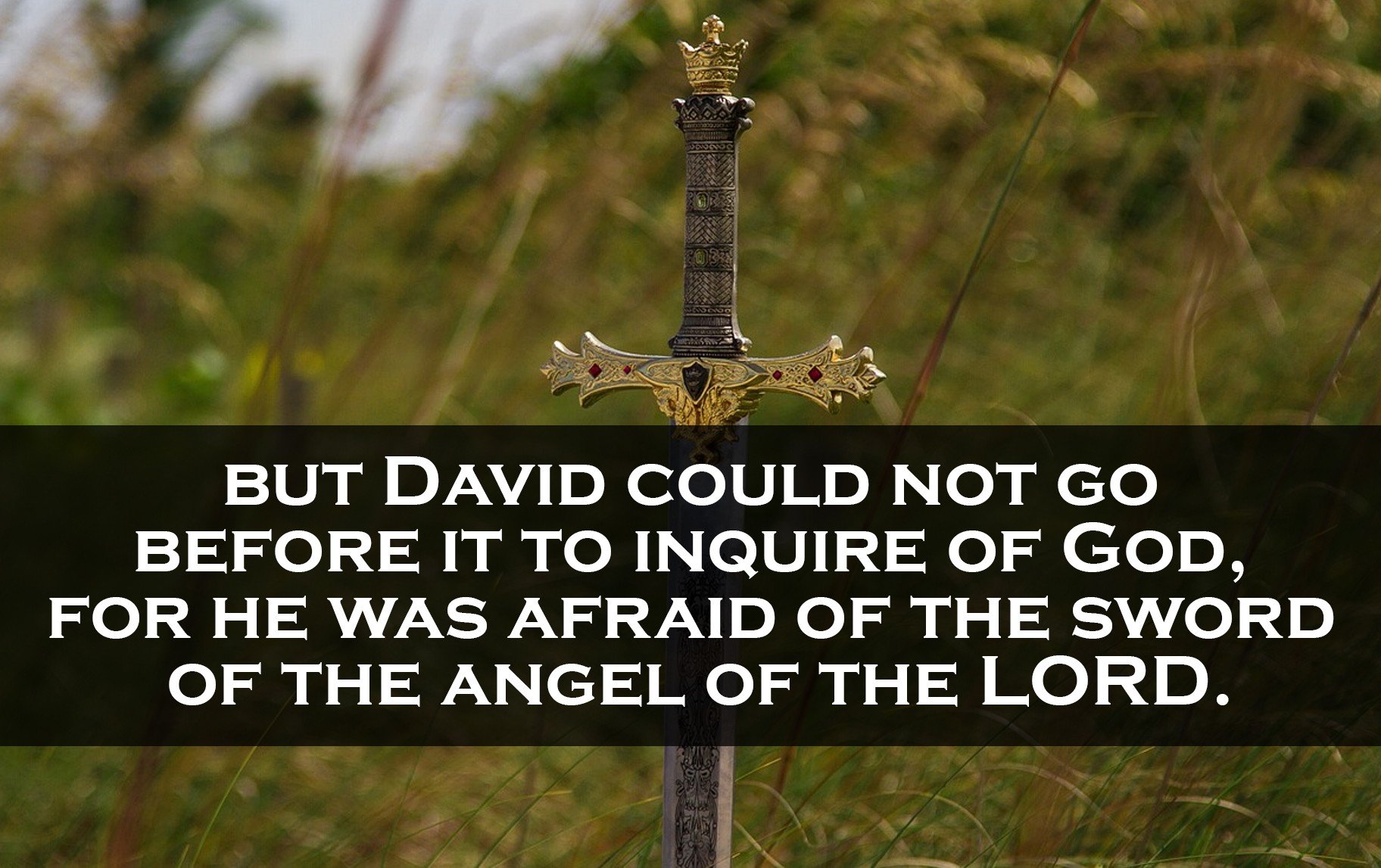 21 Then Satan stood against Israel and incited David to number Israel. So David said to Joab and the commanders of the army, “Go, number Israel, from Beersheba to Dan, and bring me a report, that I may know their number.” But Joab said, “May the LORD add to his people a hundred times as many as they are! Are they not, my lord the king, all of them my lord’s servants? Why then should my lord require this? Why should it be a cause of guilt for Israel?” But the king’s word prevailed against Joab. So Joab departed and went throughout all Israel and came back to Jerusalem. And Joab gave the sum of the numbering of the people to David. In all Israel there were 1,100,000 men who drew the sword, and in Judah 470,000 who drew the sword. But he did not include Levi and Benjamin in the numbering, for the king’s command was abhorrent to Joab.

But God was displeased with this thing, and he struck Israel. And David said to God, “I have sinned greatly in that I have done this thing. But now, please take away the iniquity of your servant, for I have acted very foolishly.” And the LORD spoke to Gad, David’s seer, saying, “Go and say to David, ‘Thus says the LORD, Three things I offer you; choose one of them, that I may do it to you.’” So Gad came to David and said to him, “Thus says the LORD, ‘Choose what you will: either three years of famine, or three months of devastation by your foes while the sword of your enemies overtakes you, or else three days of the sword of the LORD, pestilence on the land, with the angel of the LORD destroying throughout all the territory of Israel.’ Now decide what answer I shall return to him who sent me.” Then David said to Gad, “I am in great distress. Let me fall into the hand of the LORD, for his mercy is very great, but do not let me fall into the hand of man.”

So the LORD sent a pestilence on Israel, and 70,000 men of Israel fell. And God sent the angel to Jerusalem to destroy it, but as he was about to destroy it, the LORD saw, and he relented from the calamity. And he said to the angel who was working destruction, “It is enough; now stay your hand.” And the angel of the LORD was standing by the threshing floor of Ornan the Jebusite. And David lifted his eyes and saw the angel of the LORD standing between earth and heaven, and in his hand a drawn sword stretched out over Jerusalem. Then David and the elders, clothed in sackcloth, fell upon their faces. And David said to God, “Was it not I who gave command to number the people? It is I who have sinned and done great evil. But these sheep, what have they done? Please let your hand, O LORD my God, be against me and against my father’s house. But do not let the plague be on your people.”

Now the angel of the LORD had commanded Gad to say to David that David should go up and raise an altar to the LORD on the threshing floor of Ornan the Jebusite. So David went up at Gad’s word, which he had spoken in the name of the LORD. Now Ornan was threshing wheat. He turned and saw the angel, and his four sons who were with him hid themselves. As David came to Ornan, Ornan looked and saw David and went out from the threshing floor and paid homage to David with his face to the ground. And David said to Ornan, “Give me the site of the threshing floor that I may build on it an altar to the LORD—give it to me at its full price—that the plague may be averted from the people.” Then Ornan said to David, “Take it, and let my lord the king do what seems good to him. See, I give the oxen for burnt offerings and the threshing sledges for the wood and the wheat for a grain offering; I give it all.” But King David said to Ornan, “No, but I will buy them for the full price. I will not take for the LORD what is yours, nor offer burnt offerings that cost me nothing.” So David paid Ornan 600 shekels of gold by weight for the site. And David built there an altar to the LORD and presented burnt offerings and peace offerings and called on the LORD, and the LORD answered him with fire from heaven upon the altar of burnt offering. Then the LORD commanded the angel, and he put his sword back into its sheath.

At that time, when David saw that the LORD had answered him at the threshing floor of Ornan the Jebusite, he sacrificed there. For the tabernacle of the LORD, which Moses had made in the wilderness, and the altar of burnt offering were at that time in the high place at Gibeon, but David could not go before it to inquire of God, for he was afraid of the sword of the angel of the LORD.

Numbers.  We often can be caught up in the measurement of success by how much or how many things we have. Obviously, we do this with our bank accounts.  We take stock as to how well we’re doing by the bottom line dollar in our savings or checking.  We see this in the corporate world where measurement of success is how many deals we’ve been able to make.  The lure of numbers is something many struggle with.

This is particularly a temptation in the church and ministry-related organizations.  We look at the numbers of people who turn out for some service or event; we take a headcount of those who made a decision for Christ.  I know of one Christian organization that requires tallied numbers of how many made a commitment.  They promote these numbers to show how successful their program is as it brings in more money to sustain the budget.  It all sounds so wrong, right?  It is.

The lure of keeping a record is a force to be reckoned with.  For those in ministry, they know how discouragement can come or success is monitored.  It’s a terrible trap.  What is so fascinating is as this chapter opens it states, “Satan rose up against Israel and incited David to take a census of Israel.”  What’s so interesting is this is the first time the name Satan appears in Scripture as a proper noun.  There is something to consider with this fact.

Satan laid the trap and tempted David.  David took the bait.  Some would question what the big deal was in such a count for David’s census was not against God’s law.  In fact, this had been done in Exodus.  The problem was this was all about David’s pride.  His pride played into the mighty force of men he had as an army. It was a statement about that neglected where his real strength came from – his God.  What’s even more surprising is the weasel Joab thought it was wrong.  Although he spoke up to David, David insisted on it happening.

Here’s the thought.  An action we decide to take may not be sinful in itself.  It turns that way when it builds us up, is driven by pride or arrogance.  David and his troops paid dearly for his bullheaded determination to count the army.  Motives can be exposed by our actions and when our motives are wrong, so are we.

To David’s credit, he takes responsibility for the error in judgment. He even asks God to spare His people and instead punish him and his family. Anytime sin separated the people from God, a sacrifice was required to come back into right relationship. This is exactly what was required of David.

“The presentation of appropriate burnt offerings and peace offerings (v. 1Ch 21:26) would be the occasion for reconciliation, as the Law explained (Num 15:1-10).”

David requested the site from Ornan and it seemed that it would be given to him. But David insisted on paying the full price and bought the site for 240 ounces of gold, or, $100,000. This is an important detail. Much like the Lord required the best animal to be put on the altar, it would cost something. There was a price.

Today, that cost means giving our entire lives to Jesus Christ. Though grace is freely given, there is a cost to follow. In Luke 14, Jesus says this…

So therefore, any one of you who does not renounce all that he has cannot be my disciple.

Discipleship means placing all things in God’s hands. Sometimes we approach decisions by contributing the bare minimum. But following Jesus is not just any decision. It’s not a trivial matter. God deserves all of us. If you are not continually evaluating and striving to be fully devoted to God, you may not be His disciple.