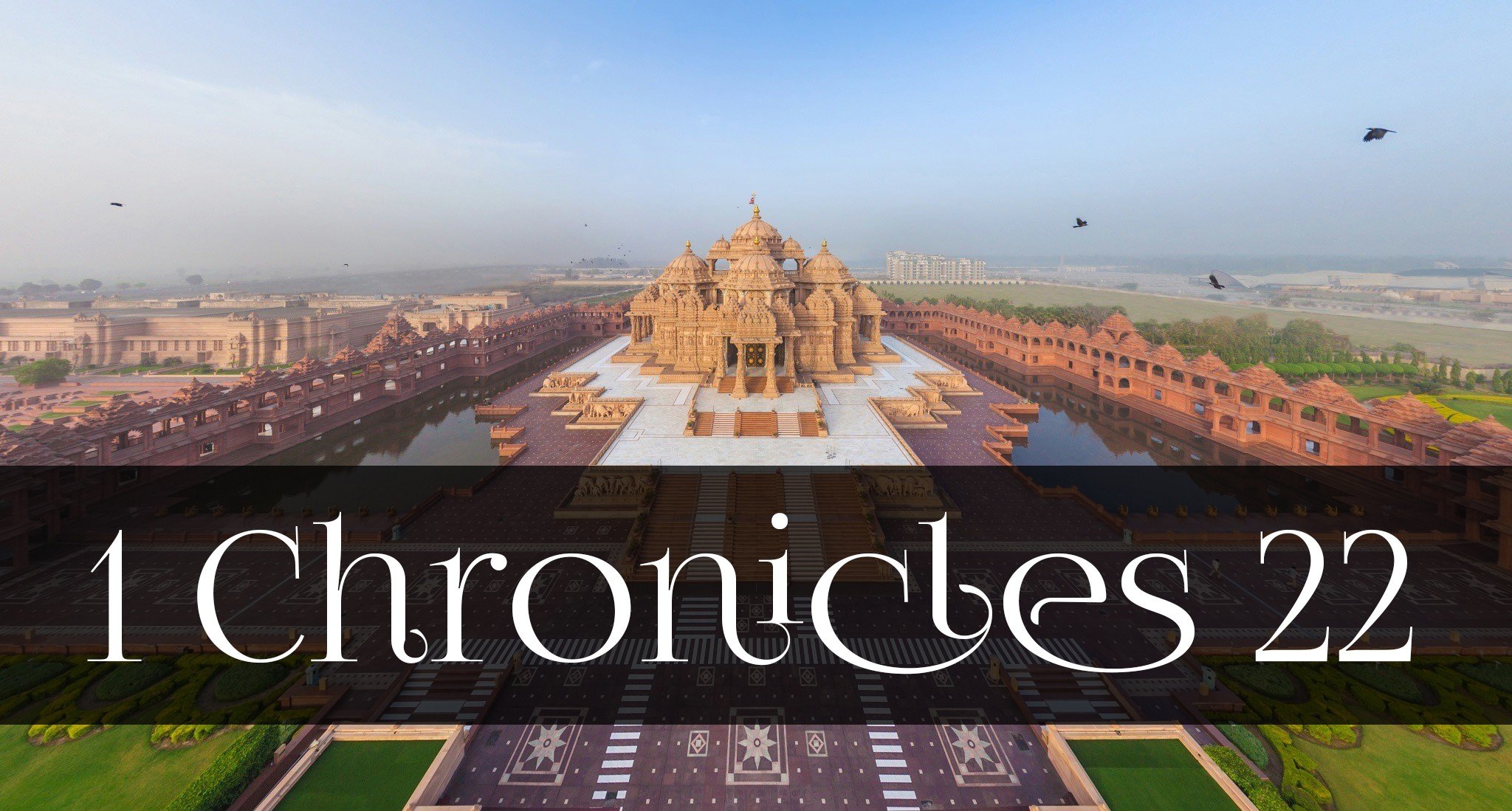 22 Then David said, “Here shall be the house of the LORD God and here the altar of burnt offering for Israel.”

David commanded to gather together the resident aliens who were in the land of Israel, and he set stonecutters to prepare dressed stones for building the house of God. David also provided great quantities of iron for nails for the doors of the gates and for clamps, as well as bronze in quantities beyond weighing, and cedar timbers without number, for the Sidonians and Tyrians brought great quantities of cedar to David. For David said, “Solomon my son is young and inexperienced, and the house that is to be built for the LORD must be exceedingly magnificent, of fame and glory throughout all lands. I will therefore make preparation for it.” So David provided materials in great quantity before his death.

Solomon Charged to Build the Temple

Then he called for Solomon his son and charged him to build a house for the LORD, the God of Israel. David said to Solomon, “My son, I had it in my heart to build a house to the name of the LORD my God. But the word of the LORD came to me, saying, ‘You have shed much blood and have waged great wars. You shall not build a house to my name, because you have shed so much blood before me on the earth. Behold, a son shall be born to you who shall be a man of rest. I will give him rest from all his surrounding enemies. For his name shall be Solomon, and I will give peace and quiet to Israel in his days. He shall build a house for my name. He shall be my son, and I will be his father, and I will establish his royal throne in Israel forever.’

“Now, my son, the LORD be with you, so that you may succeed in building the house of the LORD your God, as he has spoken concerning you. Only, may the LORD grant you discretion and understanding, that when he gives you charge over Israel you may keep the law of the LORD your God. Then you will prosper if you are careful to observe the statutes and the rules that the LORD commanded Moses for Israel. Be strong and courageous. Fear not; do not be dismayed. With great pains I have provided for the house of the LORD 100,000 talents of gold, a million talents of silver, and bronze and iron beyond weighing, for there is so much of it; timber and stone, too, I have provided. To these you must add. You have an abundance of workmen: stonecutters, masons, carpenters, and all kinds of craftsmen without number, skilled in working gold, silver, bronze, and iron. Arise and work! The LORD be with you!”

David also commanded all the leaders of Israel to help Solomon his son, saying, “Is not the LORD your God with you? And has he not given you peace on every side? For he has delivered the inhabitants of the land into my hand, and the land is subdued before the LORD and his people. Now set your mind and heart to seek the LORD your God. Arise and build the sanctuary of the LORD God, so that the ark of the covenant of the LORD and the holy vessels of God may be brought into a house built for the name of the LORD.”

Sometimes the things we desire to accomplish within this lifetime are not reached.  Sometimes our own dreams of what we long to see become never reach the final product.  Sometimes others are given the reins of some project or task that was our idea to begin with.

Would you still work on it?  Even if you were not going to see any of the end results or be involved on the level you desired, would you still give of yourself to the work?

Throughout Scripture we see this to be the case.  Moses led the people of Israel for 40 years, was taken to the very edge of the Promised Land but denied entry.  Paul planted seeds among many people, started churches only to give the leadership over to men he mentored.  Jesus Himself laid all the groundwork for the glorious church and what He knew it would become to the men and many others He invested in.  And here, David laid down his rights and desire to be the builder of the Temple as the construction would be given to his son, Solomon.

It’s amazing to consider how David navigated through this.  For what we see is he accepted the “No” from God but continued to lay the plans for what would become.  He purchased the land.  He hired workers to do preliminary work with the stone cutting all the way down to the making of nails.  He laid out the plans.  And David poured into his son Solomon who would complete the project.

Interestingly, what would become has never been referred to as David’s temple.  It was Solomon who as he carried out these plans would get the credit.  David being a man after God’s own heart was what made his resolve to go forward even though in the end he would not be involved in the construction.

This is a challenging thought to consider.  Are we faithful to the end result based on our involvement or will we work as God commands even though our dreams are to be passed on to others?  I often say when it comes to my Associates at the church, “I’m just working myself out of a job.”  I do have that perspective and mean it but there are times it’s hard.  That’s just being honest.  Sometimes our role is simply a cog in the wheel of the greater picture God desires.

This is a heart issue.  And our hearts must be in sync with God all the time to fulfill the dreams and desires He gives even if the end result passes us by.  Give yourself fully to the work God has commissioned.  Invest in others who are coming after.  The dreams God gives are God’s, not ours.  Within those dreams, we have a role.

Though David served Israel in many ways, his primary role was as a military leader. He was considered a man of war. Before a nation can build a palace or temple, they must first defeat their neighboring enemies. David would defeat the enemies and Solomon would build the temple. This was the order the Lord desired.

David’s conquests gathered unbelievable wealth for the nation of Israel.

With great pains I have provided for the house of the LORD 100,000 talents of gold, a million talents of silver, and bronze and iron beyond weighing, for there is so much of it; timber and stone, too, I have provided. To these,you must add.

Today, this amounts to 36 billion in gold and 80 million in silver! Many think this is a scribal error, but even if that’s possible the fact remained that David provided the essentials for the needle to move forward. Commentator David Guzik compiled the following list of his accomplishments…

David is an example of someone who works in the background, who receives none or little credit for his work, but the job cannot be done without him.

This reminds me of the “greater David” who would come from his lineage. Jesus Christ did the same thing on a higher platform. He came with a Message and prepared humanity for the kingdom of God. He won the ultimate peace with God’s wrath by defeating sin and death at the cross. Jesus also prepared his “materials” (the church) who would take the Good News to the ends of the Earth.

When we read this story, we need to think in terms of David representing Jesus and Solomon representing us. Solomon needed to grow in wisdom in order to fulfill his calling. But, the foundation was already laid for him and victory was waiting. We have the same opportunity. Through Christ, our foundation has been set and the victory has been won! We must develop wisdom as we fulfill our role as his sons and daughters.