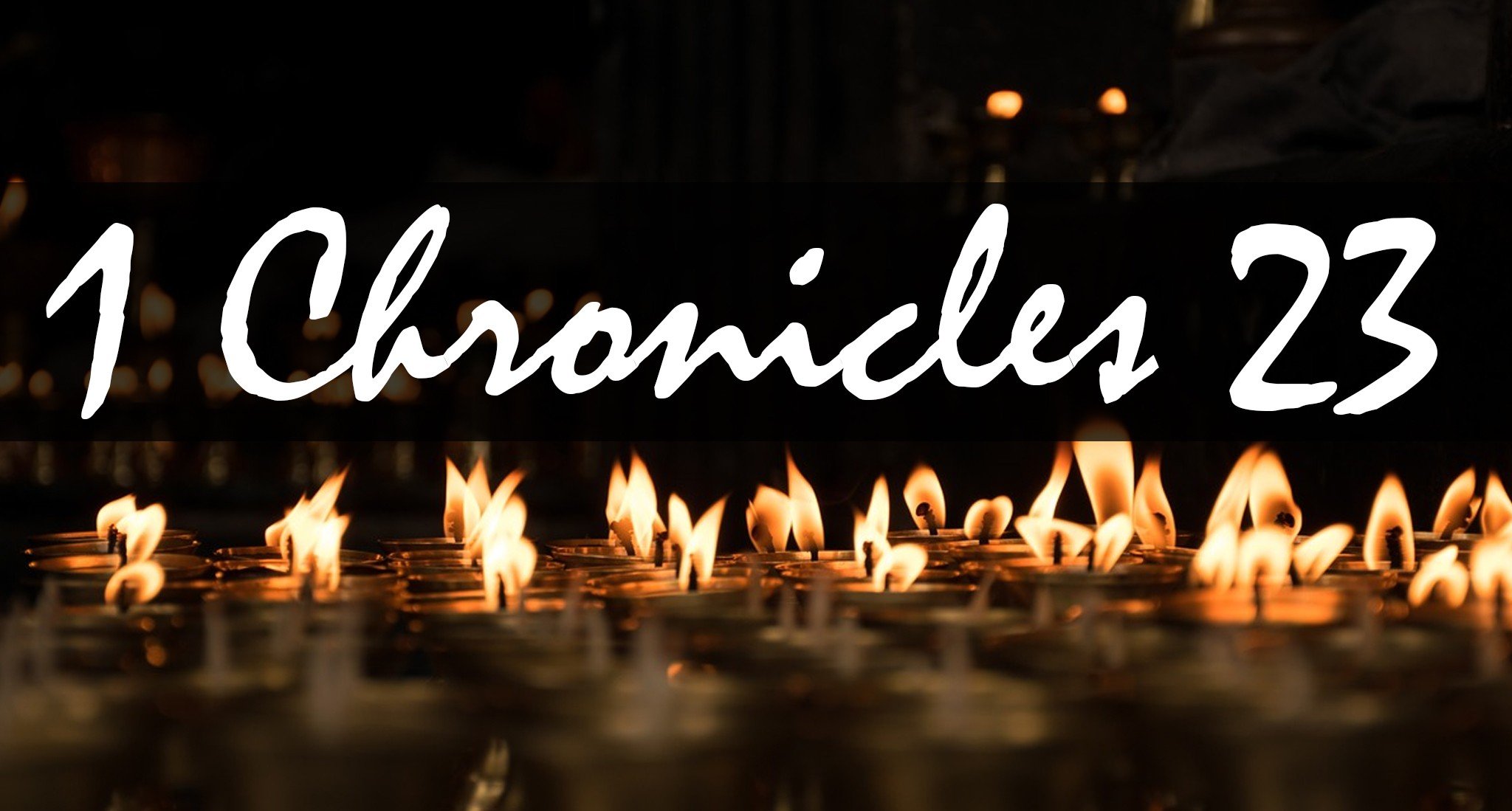 23 When David was old and full of days, he made Solomon his son king over Israel.

David assembled all the leaders of Israel and the priests and the Levites. The Levites, thirty years old and upward, were numbered, and the total was 38,000 men. “Twenty-four thousand of these,” David said, “shall have charge of the work in the house of the LORD, 6,000 shall be officers and judges, 4,000 gatekeepers, and 4,000 shall offer praises to the LORD with the instruments that I have made for praise.” And David organized them in divisions corresponding to the sons of Levi: Gershon, Kohath, and Merari.

The sons of Merari: Mahli and Mushi. The sons of Mahli: Eleazar and Kish. Eleazar died having no sons, but only daughters; their kinsmen, the sons of Kish, married them. The sons of Mushi: Mahli, Eder, and Jeremoth, three.

These were the sons of Levi by their fathers’ houses, the heads of fathers’ houses as they were listed according to the number of the names of the individuals from twenty years old and upward who were to do the work for the service of the house of the LORD. For David said, “The LORD, the God of Israel, has given rest to his people, and he dwells in Jerusalem forever. And so the Levites no longer need to carry the tabernacle or any of the things for its service.” For by the last words of David the sons of Levi were numbered from twenty years old and upward. For their duty was to assist the sons of Aaron for the service of the house of the LORD, having the care of the courts and the chambers, the cleansing of all that is holy, and any work for the service of the house of God. Their duty was also to assist with the showbread, the flour for the grain offering, the wafers of unleavened bread, the baked offering, the offering mixed with oil, and all measures of quantity or size. And they were to stand every morning, thanking and praising the LORD, and likewise at evening, and whenever burnt offerings were offered to the LORD on Sabbaths, new moons, and feast days, according to the number required of them, regularly before the LORD. Thus they were to keep charge of the tent of meeting and the sanctuary, and to attend the sons of Aaron, their brothers, for the service of the house of the LORD.

David’s life was coming to an end.  His life was a testament to the grace of God, the leading of His ways.  In many aspects throughout the stories recorded we read of some pretty awful choices, sinful behavior, and brutal consequences.  None of this deterred him from loving and following God.  He faithfully would return to Him in brokenness and then be re-energized to love Him more.  He understood grace firsthand.

What also is quite remarkable is David worked until he could no more physically on something he would never see completed.  He made preparations for the temple physically but for the next 5 chapters, we read of how he organized how the administration and worship services themselves would run.  It says so much of his character.

In an intriguing way, it would centuries later when Israel was sent off to exile to Babylon.  They would lose everything.  After 70 years a remnant would be sent back to rebuild the ruined temple.  Ezra, the author of Chronicles, would be one of the priests who went.  He would turn to the documents David wrote concerning the procedures of how the temple was to run and what was to be done.

These chapters reveal the selfless character of David and love for God in worship.  Are we leaving behind the same things to future generations?  It’s a hard question because we have no idea really. What matters is how as we love our God, serve our Jesus, worship Him fully because of the grace given now.

David appoints Solomon king, then numbers the Levites for their special work. He made arrangements to ensure that the worship of the true and living God would continue long beyond his life.

These were the sons of Levi by their fathers’ houses, the heads of fathers’ houses as they were listed according to the number of the names of the individuals from twenty years old and upward who were to do the work for the service of the house of the LORD.

David changed the Levite’s age from 30 to 20 in order to provide more workers for the future temple. A Levite priest would then begin at age 20 and “retire” at age 50, but could still participate in the duties with their brothers. As Selman writes…

“Temple service will certainly have brought increased work, even though the occasional duty of transporting the ark was now to be abolished. In fact, the Levites and their duties had suffered from long-standing neglect.”

Neglect of worship. I have reminded myself of this subtle but damaging trait we tend to fall into. Though it’s not a formal “duty” required for us as Christians, the cross leads us to worship. God in all his glory leads us to worship. But many times we neglect it and push it aside with good intentions. “I’ll do it tonight.” “I’ll do it tomorrow.” “I just don’t have enough time right now.” These are all excuses we’ve all made in justifying our lack of worship.

But within grace, there is a new day to come before the throne of God. Within Christ, we can repent and turn from our lack of commitment and recommit our lives to his purposes. Is this something you need?