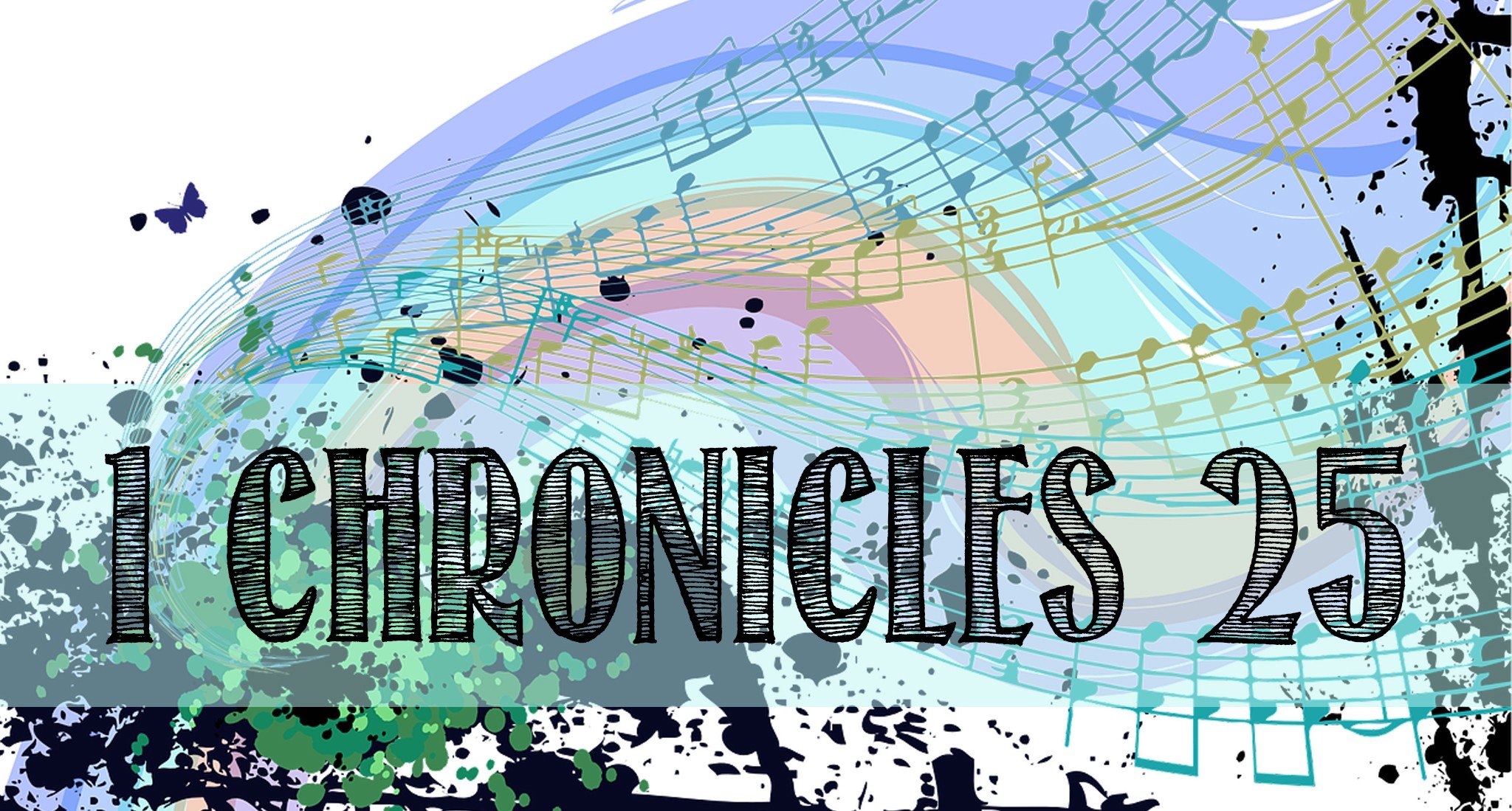 25 David and the chiefs of the service also set apart for the service the sons of Asaph, and of Heman, and of Jeduthun, who prophesied with lyres, with harps, and with cymbals. The list of those who did the work and of their duties was: Of the sons of Asaph: Zaccur, Joseph, Nethaniah, and Asharelah, sons of Asaph, under the direction of Asaph, who prophesied under the direction of the king. Of Jeduthun, the sons of Jeduthun: Gedaliah, Zeri, Jeshaiah, Shimei, Hashabiah, and Mattithiah, six, under the direction of their father Jeduthun, who prophesied with the lyre in thanksgiving and praise to the LORD. Of Heman, the sons of Heman: Bukkiah, Mattaniah, Uzziel, Shebuel and Jerimoth, Hananiah, Hanani, Eliathah, Giddalti, and Romamti-ezer, Joshbekashah, Mallothi, Hothir, Mahazioth. All these were the sons of Heman the king’s seer, according to the promise of God to exalt him, for God had given Heman fourteen sons and three daughters. They were all under the direction of their father in the music in the house of the LORD with cymbals, harps, and lyres for the service of the house of God. Asaph, Jeduthun, and Heman were under the order of the king. The number of them along with their brothers, who were trained in singing to the LORD, all who were skillful, was 288. And they cast lots for their duties, small and great, teacher and pupil alike.

It’s an interesting chapter listing the singers of the tabernacle.  These had a vital role in singing praise and bringing words of encouragement to the people.  What we read here is of specific family groups and men who were responsible for contributing to the service itself.  From prophecy to leading in thanksgiving and praise, to playing of instruments – all had a role to fill.  Their participation would lead others in having their hearts turned toward God who had done so much for them.

From the Old to New Testament we read of various instances where music and praise to God did something for the people themselves.  Musical instruments were used in various ways as part of celebrations and triumph.  Moses’ sister Miriam along with other women danced and sang before God.  Jericho fell when the trumpets sounded.  Through David’s songs of praise, Saul received peace. The coronation of kings had music played in celebration.  Jesus and his disciples sang hymns.  Paul and Silas sang while in jail – being the instrument that brought the jail keeper and family to Christ.

Within a church service there are some who simply feel like the praise and worship time is just a preliminary to the sermon.  They couldn’t be more wrong.  Our time of praise and worship to God, through voice and instrument, is essential to draw our hearts to God to hear the Word to be given.  It not only has the ability to set our hearts free from the tangled mess we have had that week but draws our focus to the greatness of our God who loves us so much.  It really is a perspective game changer I believe.  And more importantly God delights in the praise of His people.

Attention musicians! Does the name Asaph mean anything to you? Anyone….anyone…..Bueller?

Although it might not mean anything to us, the name Asaph was as familar as Bach or Beethoven in ancient Israel. In Nehemiah 7, we get a specific example of the singers and muscians who led Israel’s worship during a critical point in their history. It would be the family of Asaph who returned from the exhile to lead the people in song.

Although Asaph was known for his exceptional talent on the bronze cymbals, (1 Ch 15:19, 1 Ch 16:15) he was much more than just a musician.  In 2 Chronicles 29, he is described as a seer. Asaph’s purpose and calling was to glorify the Lord to the people through music.

2 Chronicles 29:30 ESV And Hezekiah the king and the officials commanded the Levites to sing praises to the LORD with the words of David and of Asaph the seer. And they sang praises with gladness, and they bowed down and worshiped.

All in all, Asaph and his descendants would produce at least twelve psalms. It is no coincidence that during this time of strong musical leadership there was a revival of the spiritual condition. Under Solomon, Hezekiah, and even throughout the second temple which was constructed by Zerubbabel and Ezra, Asaph and his family left a powerful legacy of praise and worship. It played a vital role for the people’s spiritual condition.