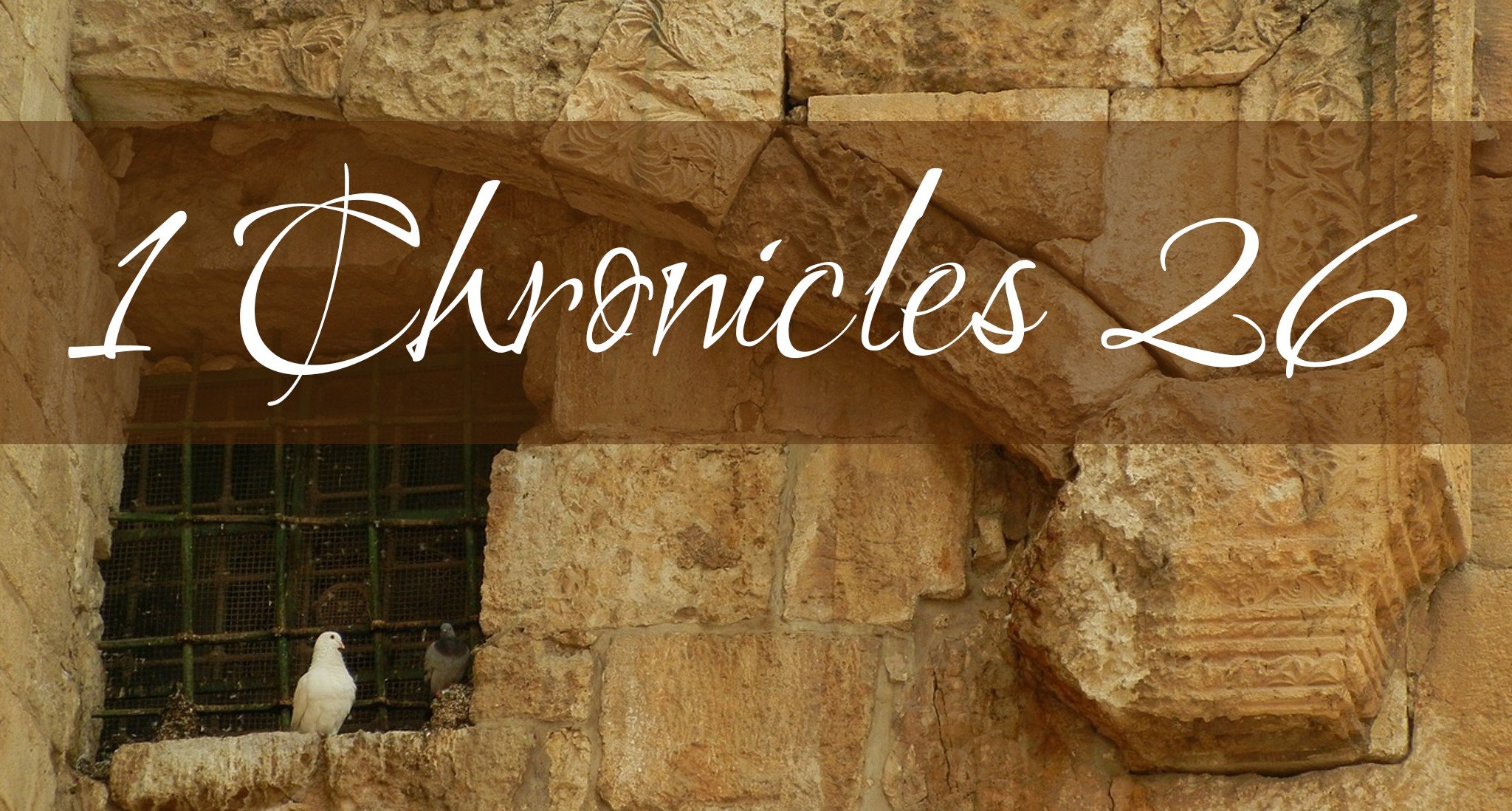 Divisions of the Gatekeepers

26 As for the divisions of the gatekeepers: of the Korahites, Meshelemiah the son of Kore, of the sons of Asaph. And Meshelemiah had sons: Zechariah the firstborn, Jediael the second, Zebadiah the third, Jathniel the fourth, Elam the fifth, Jehohanan the sixth, Eliehoenai the seventh. And Obed-edom had sons: Shemaiah the firstborn, Jehozabad the second, Joah the third, Sachar the fourth, Nethanel the fifth, Ammiel the sixth, Issachar the seventh, Peullethai the eighth, for God blessed him. Also to his son Shemaiah were sons born who were rulers in their fathers’ houses, for they were men of great ability. The sons of Shemaiah: Othni, Rephael, Obed and Elzabad, whose brothers were able men, Elihu and Semachiah. All these were of the sons of Obed-edom with their sons and brothers, able men qualified for the service; sixty-two of Obed-edom. And Meshelemiah had sons and brothers, able men, eighteen. And Hosah, of the sons of Merari, had sons: Shimri the chief (for though he was not the firstborn, his father made him chief), Hilkiah the second, Tebaliah the third, Zechariah the fourth: all the sons and brothers of Hosah were thirteen.

These divisions of the gatekeepers, corresponding to their chief men, had duties, just as their brothers did, ministering in the house of the LORD. And they cast lots by fathers’ houses, small and great alike, for their gates. The lot for the east fell to Shelemiah. They cast lots also for his son Zechariah, a shrewd counselor, and his lot came out for the north. Obed-edom’s came out for the south, and to his sons was allotted the gatehouse. For Shuppim and Hosah it came out for the west, at the gate of Shallecheth on the road that goes up. Watch corresponded to watch. On the east there were six each day, on the north four each day, on the south four each day, as well as two and two at the gatehouse. And for the colonnade on the west there were four at the road and two at the colonnade. These were the divisions of the gatekeepers among the Korahites and the sons of Merari.

Treasurers and Other Officials

The sons of Jehieli, Zetham, and Joel his brother, were in charge of the treasuries of the house of the LORD. Of the Amramites, the Izharites, the Hebronites, and the Uzzielites—and Shebuel the son of Gershom, son of Moses, was chief officer in charge of the treasuries. His brothers: from Eliezer were his son Rehabiah, and his son Jeshaiah, and his son Joram, and his son Zichri, and his son Shelomoth. This Shelomoth and his brothers were in charge of all the treasuries of the dedicated gifts that David the king and the heads of the fathers’ houses and the officers of the thousands and the hundreds and the commanders of the army had dedicated. From spoil won in battles they dedicated gifts for the maintenance of the house of the LORD. Also all that Samuel the seer and Saul the son of Kish and Abner the son of Ner and Joab the son of Zeruiah had dedicated—all dedicated gifts were in the care of Shelomoth and his brothers.

Of the Izharites, Chenaniah and his sons were appointed to external duties for Israel, as officers and judges. Of the Hebronites, Hashabiah and his brothers, 1,700 men of ability, had the oversight of Israel westward of the Jordan for all the work of the LORD and for the service of the king. Of the Hebronites, Jerijah was chief of the Hebronites of whatever genealogy or fathers’ houses. (In the fortieth year of David’s reign search was made and men of great ability among them were found at Jazer in Gilead.) King David appointed him and his brothers, 2,700 men of ability, heads of fathers’ houses, to have the oversight of the Reubenites, the Gadites and the half-tribe of the Manassites for everything pertaining to God and for the affairs of the king.

Their total number was over 4000.  These able and called men were Levites.  Their title was that of gatekeeper.  Interesting and a wonder as to what this actually involved or meant.

Those who were given such a title had a responsibility concerning the security and safety of the tabernacle.  On many levels, this was not only a physical duty but a spiritual one as well.  These Levites had an obligation to make sure those who passed through the gates were prepared and willing to serve God whom they worshiped.  We must remember God demanded specific things for those to enter His presence.  These gatekeepers had the task of making people aware of the practical aspects of holiness in order to enter the sanctuary.

There were 4 main entrances to the temple. Those who held this role opened the gates for those who had come to worship.  They also had a long list of day to day things that had to be completed so everything about the temple would run smoothly.  This involved cleaning the utensils used in the services, working in the storage room where food supplies for the priests and sacrifices were held.  They also looked after the furniture, mixed incense and received a count of the gifts brought.

It really doesn’t sound that glamorous on many levels, does it?  But their role was just as critical as the priests.  The tasks they performed were essential.  On some levels, this was a behind the scene work.  As the Body of Christ has many parts, all are needed to work together toward the ultimate goal of proclaiming Jesus.  Some ‘body parts’ are evident to all.  Others are hidden.  All are needed.

Wherever God has gifted you, you are needed in the church to help things run smoothly, establish ministries and work through them, to be where you are gifted so you thrive in that gift.  No gift is greater than the other and all are essential.

The house of God in verse 20 referred to a place where treasuries and gifts would be stored. Part of these would be items used for worship but others would be the spoils of victory.

From spoil won in battles they dedicated gifts for the maintenance of the house of the LORD.

The battles provided tangible items that fueled the resources of the house of God. This is an interesting thought. If you think in terms of today, we know that victory is found through Jesus. He fought our battle and He was victorious. Through this gift, our hearts become full. Not only that, but through faith and active belief in His victory, we are empowered to maintain our temples.

We tend to shy away from battles. They are unnatural and uncomfortable. However, some of the greatest spiritual breakthroughs take place after a battle. We must remember this!

This passage challenges me to think of my personal battles as a storage house for intangible spiritual gifts. These gifts will fuel our personal growth and ultimately be used to build up the house of God!