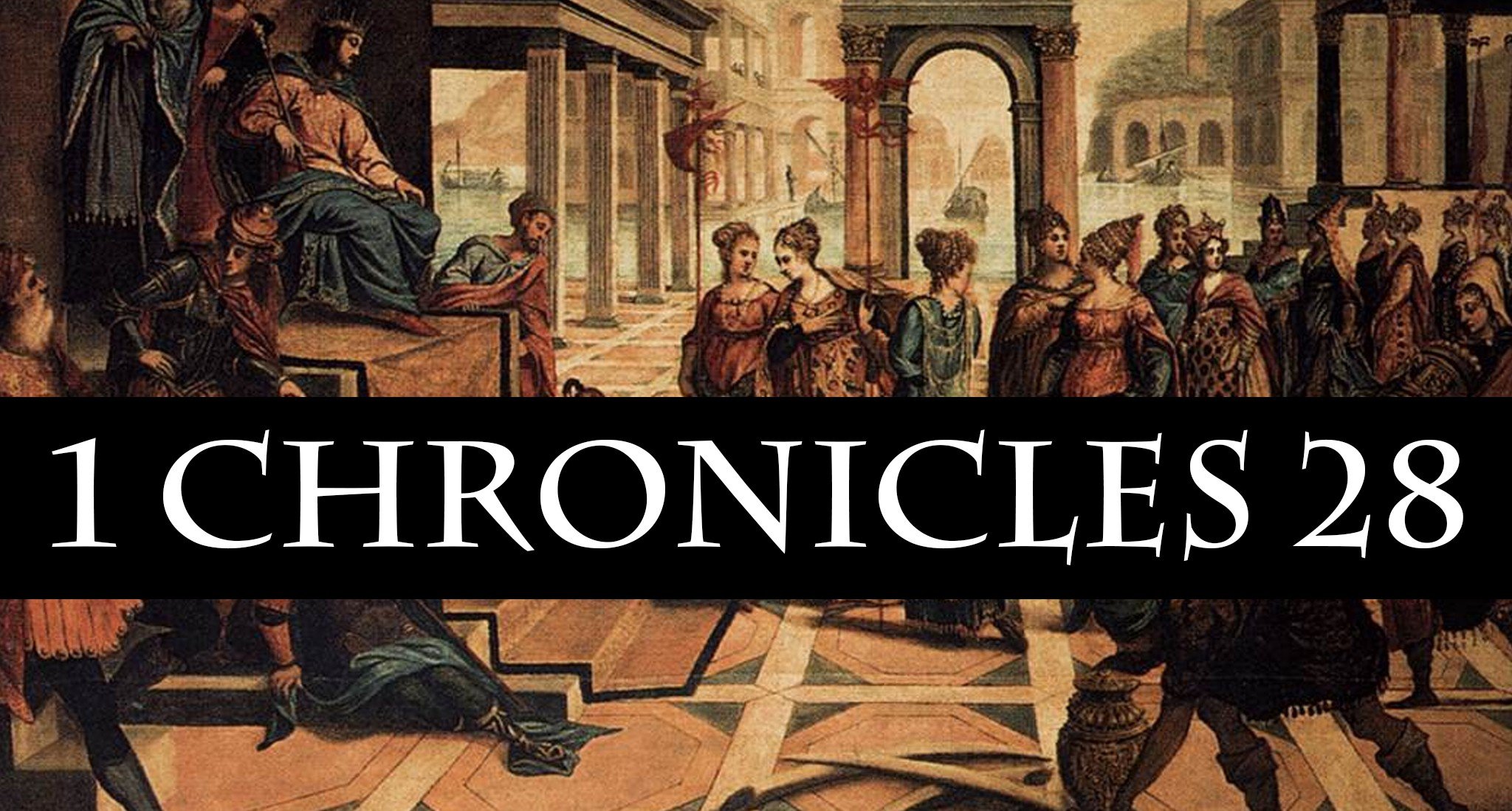 28 David assembled at Jerusalem all the officials of Israel, the officials of the tribes, the officers of the divisions that served the king, the commanders of thousands, the commanders of hundreds, the stewards of all the property and livestock of the king and his sons, together with the palace officials, the mighty men and all the seasoned warriors. Then King David rose to his feet and said: “Hear me, my brothers and my people. I had it in my heart to build a house of rest for the ark of the covenant of the LORD and for the footstool of our God, and I made preparations for building. But God said to me, ‘You may not build a house for my name, for you are a man of war and have shed blood.’ Yet the LORD God of Israel chose me from all my father’s house to be king over Israel forever. For he chose Judah as leader, and in the house of Judah my father’s house, and among my father’s sons he took pleasure in me to make me king over all Israel. And of all my sons (for the LORD has given me many sons) he has chosen Solomon my son to sit on the throne of the kingdom of the LORD over Israel. He said to me, ‘It is Solomon your son who shall build my house and my courts, for I have chosen him to be my son, and I will be his father. I will establish his kingdom forever if he continues strong in keeping my commandments and my rules, as he is today.’ Now therefore in the sight of all Israel, the assembly of the LORD, and in the hearing of our God, observe and seek out all the commandments of the LORD your God, that you may possess this good land and leave it for an inheritance to your children after you forever.

“And you, Solomon my son, know the God of your father and serve him with a whole heart and with a willing mind, for the LORD searches all hearts and understands every plan and thought. If you seek him, he will be found by you, but if you forsake him, he will cast you off forever. Be careful now, for the LORD has chosen you to build a house for the sanctuary; be strong and do it.”

Then David said to Solomon his son, “Be strong and courageous and do it. Do not be afraid and do not be dismayed, for the LORD God, even my God, is with you. He will not leave you or forsake you, until all the work for the service of the house of the LORD is finished. And behold the divisions of the priests and the Levites for all the service of the house of God; and with you in all the work will be every willing man who has skill for any kind of service; also the officers and all the people will be wholly at your command.”

The crowds had grown.  People were coming to Jesus in droves.  But He knew their hearts and knew also their commitment was not sound. Those who were in the crowd, many would betray Him in the end.   John 6 records He decided to make very bold controversial statements about who He was.  This was by design.  “He who eats my flesh and drinks my blood has eternal life, and I will raise him up on the last day.” (John 6:54).  The statement and dialogue that followed did the trick.  Many of the people left.  He thinned the crowd and saw who was really committed to Him.  The passage says, “…many were not walking with Him anymore.” (John 6:66)

Turning to His disciples He asked if they were going to leave too.  Peter made the declaration of where they all stood.  “Lord, to whom shall we go?  You have the words of eternal life.”  (John 6:68)

There are times we want to quit.  Times we want to simply give up on whatever task that has been laid before us.  We have become battle weary, discouragement has pressed in on every side.  The fields we labor over we see no growth.  Relationships have become tense, we’re aware of our own brokenness.  Oh, there are many things that come upon us where we have had our fill, not sure how much more we can take and are gasping for breath.

The last 2 chapters of 1 Chronicles records the handing over of leadership from David to Solomon. David’s commission to his son is absolutely beautiful.  His opening bold.

“As for you, my son Solomon, know the God of your father, and serve Him with a whole heart and a willing mind; for the Lord searches all hearts, and understands every intent of the thoughts. If you seek Him, He will let you find Him; but if you forsake Him, He will reject you forever. 10 Consider now, for the Lord has chosen you to build a house for the sanctuary; be courageous and act.”

Besides giving Solomon the throne he wanted him to know the secret to success.  He had to be connected to his God.  “Be strong and courageous and do the work!”  Do not be afraid or discouraged for the Lord God, my God, is with you.  He will not fail you or forsake you until all the work for the serve of the temple of the Lord is finished.” (1 Chronicles 28:20)  God had a plan for Solomon.  Testing would come.  Discouragement would hit.  Trials would inundate him at times.  His focus and strength would come from God.  His success would be completely based on his relationship with God.

There is a plan that sweeps across our hearts.  It is a plan God has called each of us to.  We have our setbacks, our discouragement and lack of response in the fields of which we labor.  We must not give up. We must do the work of which He has called us to.

There is a thread between the story of Jesus and this found in Chronicles.  We have those times where we simply want to quit.  We feel like it’s not worth it.  We want to walk away.  But the questions:  Where would you go?  To whom would you go?  This is the question.

When God’s calling is deeply pressed into our person, when the Spirit has quickened our hearts for service, there is no other answer than to do the work, be strong and courageous and do not let things skew your vision for what God is doing.

I once had a pastor give me advice on how to preach a sermon. His main point was, speak to the mind and speak to the heart. Truth and grace should penetrate both our intellect and our emotions. This is essentially how David is instructing Solomon.

“As for you, my son Solomon, know the God of your father, and serve Him with a whole heart and a willing mind; for the LORD searches all hearts, and understands every intent of the thoughts. If you seek Him, He will let you find Him; but if you forsake Him, He will reject you forever. 10 “Consider now, for the LORD has chosen you to build a house for the sanctuary; be courageous and act.”

Serve Him with a whole heart and willing mind. Now we all know Solomon had the mental part figured out. By the grace of God, he was granted unfathomable wisdom. However, it would be his heart that would go astray.

Now King Solomon loved many foreign women along with the daughter of Pharaoh: Moabite, Ammonite, Edomite, Sidonian, and Hittite women, 2 from the nations concerning which the LORD had said to the sons of Israel, “You shall not associate with them, nor shall they associate with you, for they will surely turn your heart away after their gods.” Solomon held fast to these in love.

Solomon gave his heart to foreign women. They stole him from God. Because of Solomon’s choices, exactly what David warned against came to pass.

Although David was not perfect, he did show a repentant heart. He was loyal to God and trusted Him as his Rock and Fortress. There is a lot of conviction here. Isn’t it interesting that Solomon possessed incredible intellectual knowledge yet still failed in his decision-making. This fact alone shows that intellect is simply not enough! It is only part of the equation.

Even though many of us know the right way to live, our hearts must also align to passionately live out that conviction. Whatever holds our hearts will control our behavior. Good intentions will not cut it. Many of us feel that our hearts will never turn to serve God will everything we have, however, this is a lie. He has given us all the resources we need to serve Him both intellectually and emotionally!