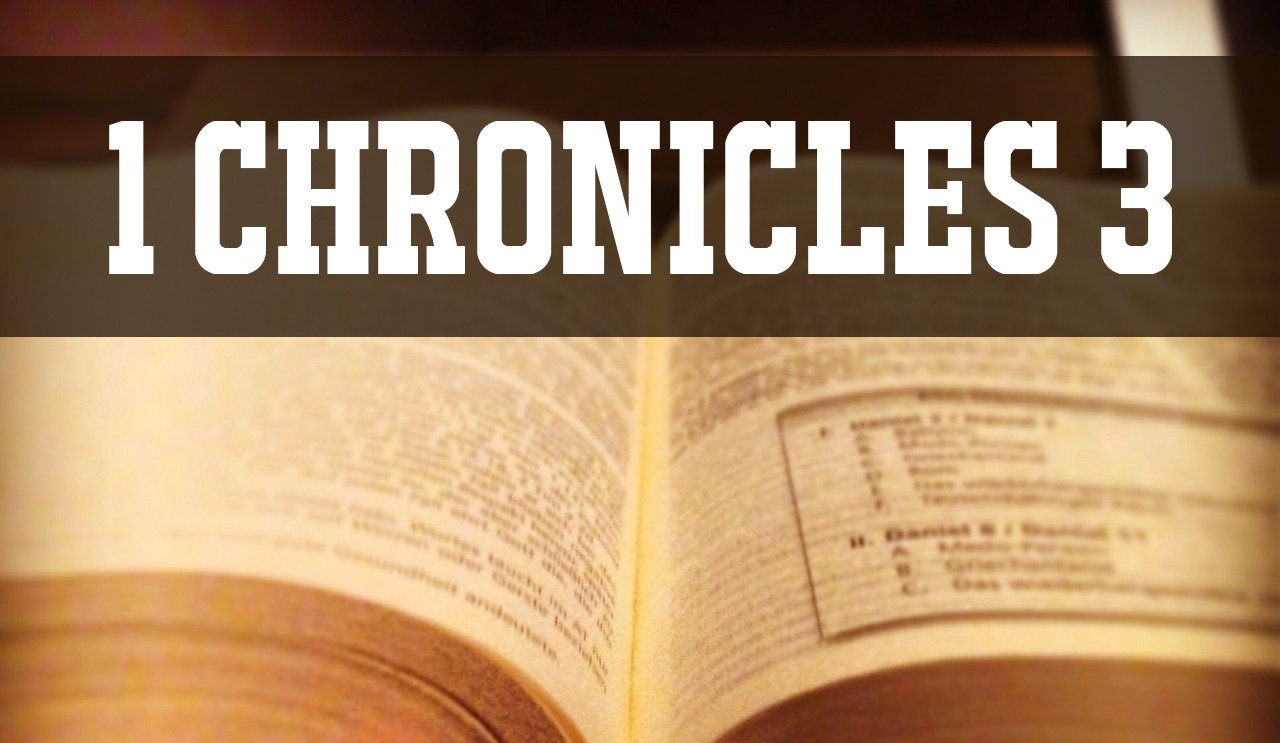 3 These are the sons of David who were born to him in Hebron: the firstborn, Amnon, by Ahinoam the Jezreelite; the second, Daniel, by Abigail the Carmelite, the third, Absalom, whose mother was Maacah, the daughter of Talmai, king of Geshur; the fourth, Adonijah, whose mother was Haggith; the fifth, Shephatiah, by Abital; the sixth, Ithream, by his wife Eglah; six were born to him in Hebron, where he reigned for seven years and six months. And he reigned thirty-three years in Jerusalem. These were born to him in Jerusalem: Shimea, Shobab, Nathan and Solomon, four by Bath-shua, the daughter of Ammiel; then Ibhar, Elishama, Eliphelet, Nogah, Nepheg, Japhia, Elishama, Eliada, and Eliphelet, nine. All these were David’s sons, besides the sons of the concubines, and Tamar was their sister.

The royal line of David and house of Jesse is recorded here.  I love how Ezra was led to record this in detail as it would be through the line of David the Messiah Jesus would come.

David had several wives, most of which are listed here.  He reigned 7 years and 6 months while living in Hebron.  When he moved to Jerusalem he would reign 33 years where this city became the capital.  After he passed, the royal line of Judah continued beginning with Solomon.  The list of names goes through the exile.

For many of us, we look at these names and they bring a slight recall to how these men reigned.  For some they were righteous, others not so much.  Several gave way to the evil of their hearts.  But through this God never lost control. I think that’s the takeaway.  God was still at work through the good and the bad.  His purpose still would stand and did.  Even though there were years of hardship which some of these kings brought about, He never had given up or lost control. It certainly looked like it I’m sure from the sight of the people living during those times.  But the record shows and is confirmed through the genealogies found in Matthew 1 and Luke 3 God’s plan stood firm.  Jesus would come through the good and the bad choices of man and their rule.

There are times for each of us we can get sidetracked by what is going on around us.  From the political scene to our own personal struggles, we wonder where God is.  Part of our faith is believing God is in control even when we don’t see it.  The key is we place our sights on God and His sovereignty even through the hardship or when things have gone from bad to worse.  God is the writer of history.  History from the past and history yet to be written.  Our role is to stay steady and look to Him.

Why the detailed genealogies?

In order to affirm God’s plan for Christ to come from Adam, David, and Abraham. These names are the historical proof of the fulfilled promises of God.

Of course, we also read here of the many wives of David, which is certainly not condoned by Scripture by any means. Unfortunately, David had fallen to the custom of marrying daughters of neighboring kings in order to keep the peace.

However, it is interesting to note the names of his sons because we get a glimpse of his heart for the Lord.

He chooses, hears, delivers, and knows. It should come as no surprise to us that David would pick these names considering what he writes about the Lord in the Psalms. A deeper dive into the historical ramifications of naming children informs us that it was customary to name your children after family history. So, it’s possible that these were the life events going on with David when his children were born.

We also experience seasons where we learn new aspects of God’s character. Let us take them to heart like David did.