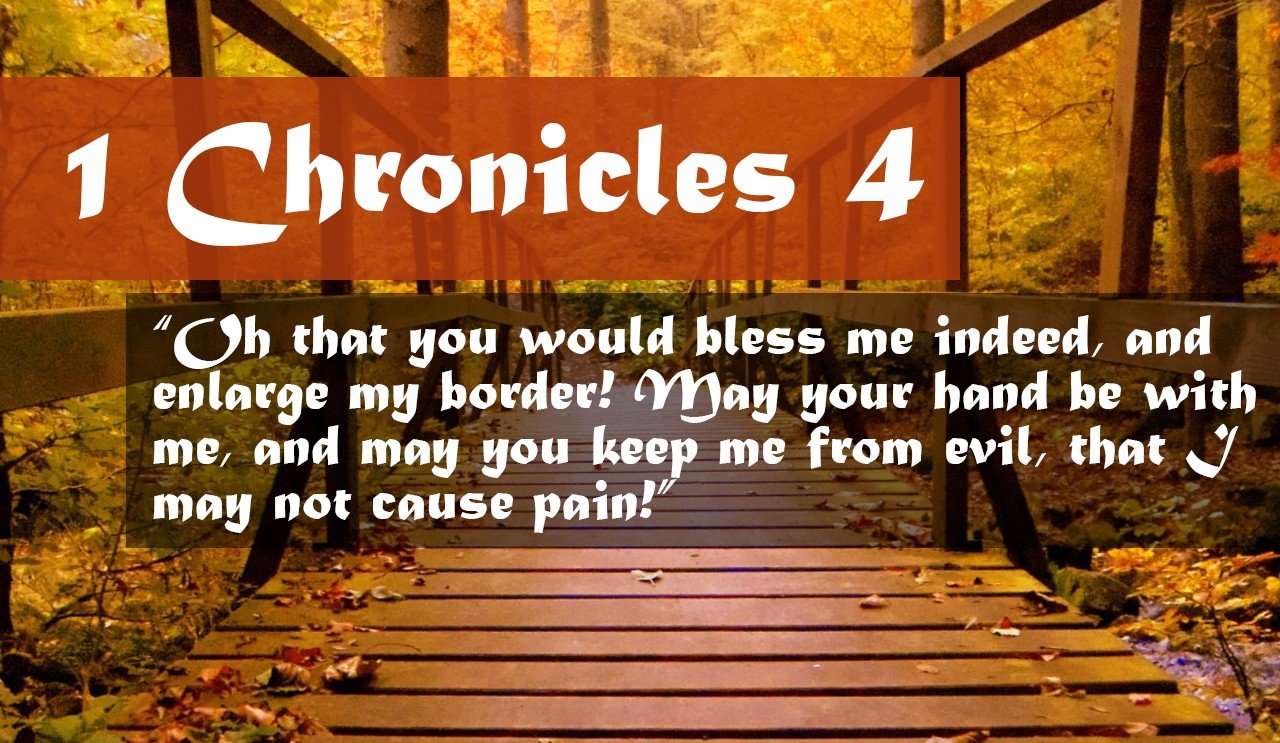 The sons of Simeon: Nemuel, Jamin, Jarib, Zerah, Shaul; Shallum was his son, Mibsam his son, Mishma his son. The sons of Mishma: Hammuel his son, Zaccur his son, Shimei his son. Shimei had sixteen sons and six daughters; but his brothers did not have many children, nor did all their clan multiply like the men of Judah. They lived in Beersheba, Moladah, Hazar-shual, Bilhah, Ezem, Tolad, Bethuel, Hormah, Ziklag, Beth-marcaboth, Hazar-susim, Beth-biri, and Shaaraim. These were their cities until David reigned. And their villages were Etam, Ain, Rimmon, Tochen, and Ashan, five cities, along with all their villages that were around these cities as far as Baal. These were their settlements, and they kept a genealogical record.

Meshobab, Jamlech, Joshah the son of Amaziah, Joel, Jehu the son of Joshibiah, son of Seraiah, son of Asiel, Elioenai, Jaakobah, Jeshohaiah, Asaiah, Adiel, Jesimiel, Benaiah, Ziza the son of Shiphi, son of Allon, son of Jedaiah, son of Shimri, son of Shemaiah—these mentioned by name were princes in their clans, and their fathers’ houses increased greatly. They journeyed to the entrance of Gedor, to the east side of the valley, to seek pasture for their flocks, where they found rich, good pasture, and the land was very broad, quiet, and peaceful, for the former inhabitants there belonged to Ham. These, registered by name, came in the days of Hezekiah, king of Judah, and destroyed their tents and the Meunites who were found there, and marked them for destruction to this day, and settled in their place, because there was pasture there for their flocks. And some of them, five hundred men of the Simeonites, went to Mount Seir, having as their leaders Pelatiah, Neariah, Rephaiah, and Uzziel, the sons of Ishi. And they defeated the remnant of the Amalekites who had escaped, and they have lived there to this day.

There is a 2 verse pause in the list of the tribes of Judah.  A pause that gives a name most have never heard, explains briefly what he did, and then virtually disappears from Scripture.  Consider how this man was not involved in the political arena or some event but is mentioned because he went to God directly for a need and found grace.

Jabez is above his brothers in honor.  Although of the same lineage there was nothing special about him. In fact, the name given while he was being born had plagued him.  He was born in pain.  It’s strange to us that a name would put such a burden upon an individual but within the Hebrew culture, your name meant everything.  On many levels, within the time, he had a strike against him.

It appears however that what put him above the others was his commitment to God.  He served Him.  He lived a good life before them, and he sought God in prayer.

Jabez’s prayer had 4 requests.  He asked to be blessed by God and he asked for God to enlarge his territory. He also prayed God’s hand would be upon him to keep him from harm.

None of these were selfish prayers.  These are reflective asking God to take this man who is humble and to be used.  The blessing he sought was for God’s glory.  The enlarging of the territory involved the conquest of Canaan and the dangers involved.  Seeking God’s hand in those days was a spiritual term referring to God’s power and presence in the Israelite’s lives.  Jabez asked for this personally.  His final request was for protection.

Usually, when a pause in a lineage takes place it’s due to a heroic act. There was nothing special about Jabez, yet, what he was mentioned and remembered for is his bold prayers.  God answered them.  There are many times that what we want to make of ourselves within this world are so off-base as to what matters to God and His Kingdom work.

The reality is we all need to pray for God’s rightful position in our lives and daily duties.  We need His presence to guide us every step of the way, bringing His blessings, enlarging the territory we work, having His hand guide our decisions and keeping us from harm.  We need his protection.

In the culture we live, obeying God daily and seeking Him – well, that is heroic living.

I also find the mentioning of Jabez to be fascinating in this long list of names. As Hank mentioned, his name meant “pain.” More specifically though, it was translated “he causes pain” which was most likely given to him as a result of how painful the labor was for his mother. In many ways, this label would stick with him into adulthood because this is one of his requests from the Lord. His final statement is that he would not cause others pain.

I know that it’s only a name, but it’s true we all begin life with some kind of obstacle. Because of sin, we struggle with all sorts of labels. The heart of Jabez was that his circumstances (that were even out of his control) would not affect his purpose and his calling. Through the Lord, there is power to change all situations. There is nothing about you that is unchangeable by the grace of Jesus.

It’s simply a matter of coming to him in faith and requesting that we are used for his glory. This is the request of Jabez, and it should be the request of us each and every day.