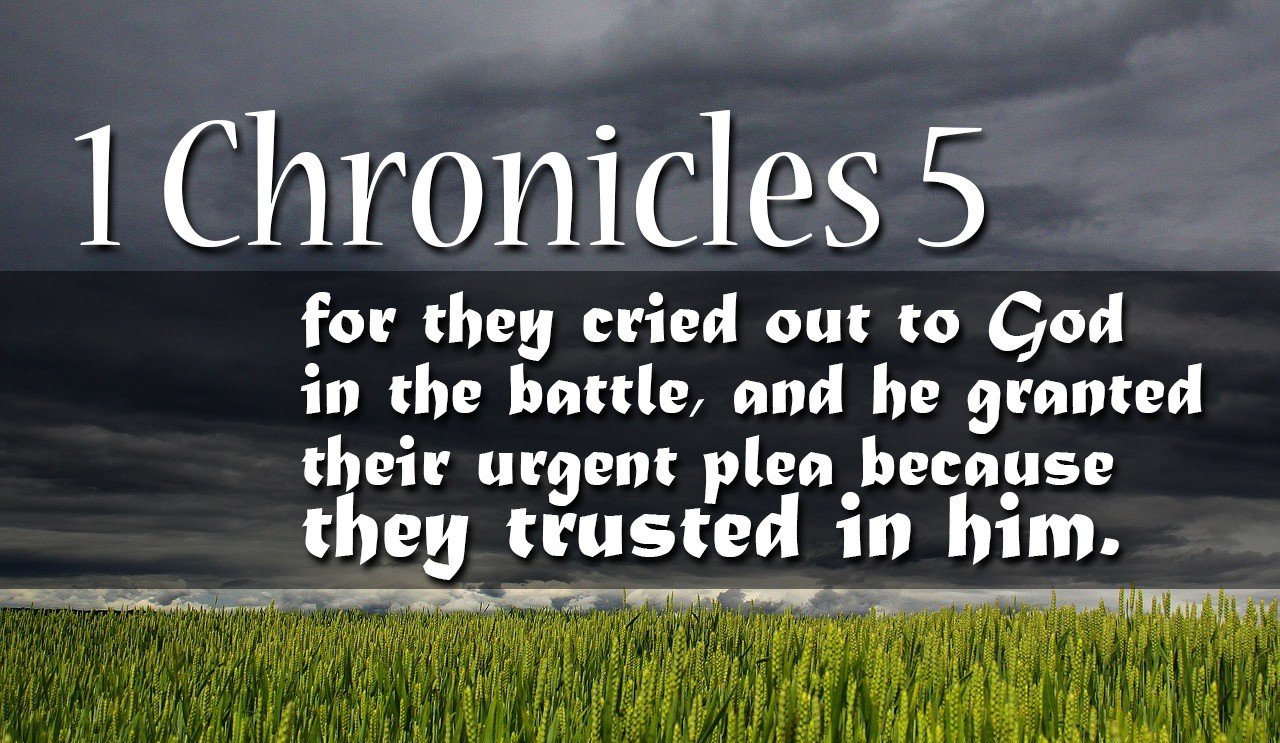 5 The sons of Reuben the firstborn of Israel (for he was the firstborn, but because he defiled his father’s couch, his birthright was given to the sons of Joseph the son of Israel, so that he could not be enrolled as the oldest son; though Judah became strong among his brothers and a chief came from him, yet the birthright belonged to Joseph), the sons of Reuben, the firstborn of Israel: Hanoch, Pallu, Hezron, and Carmi. The sons of Joel: Shemaiah his son, Gog his son, Shimei his son, Micah his son, Reaiah his son, Baal his son, Beerah his son, whom Tiglath-pileser king of Assyria carried away into exile; he was a chief of the Reubenites. And his kinsmen by their clans, when the genealogy of their generations was recorded: the chief, Jeiel, and Zechariah, and Bela the son of Azaz, son of Shema, son of Joel, who lived in Aroer, as far as Nebo and Baal-meon. He also lived to the east as far as the entrance of the desert this side of the Euphrates, because their livestock had multiplied in the land of Gilead. And in the days of Saul they waged war against the Hagrites, who fell into their hand. And they lived in their tents throughout all the region east of Gilead.

The sons of Gad lived over against them in the land of Bashan as far as Salecah: Joel the chief, Shapham the second, Janai, and Shaphat in Bashan. And their kinsmen according to their fathers’ houses: Michael, Meshullam, Sheba, Jorai, Jacan, Zia and Eber, seven. These were the sons of Abihail the son of Huri, son of Jaroah, son of Gilead, son of Michael, son of Jeshishai, son of Jahdo, son of Buz. Ahi the son of Abdiel, son of Guni, was chief in their fathers’ houses, and they lived in Gilead, in Bashan and in its towns, and in all the pasturelands of Sharon to their limits. All of these were recorded in genealogies in the days of Jotham king of Judah, and in the days of Jeroboam king of Israel.

The Reubenites, the Gadites, and the half-tribe of Manasseh had valiant men who carried shield and sword, and drew the bow, expert in war, 44,760, able to go to war. They waged war against the Hagrites, Jetur, Naphish, and Nodab. And when they prevailed over them, the Hagrites and all who were with them were given into their hands, for they cried out to God in the battle, and he granted their urgent plea because they trusted in him. They carried off their livestock: 50,000 of their camels, 250,000 sheep, 2,000 donkeys, and 100,000 men alive. For many fell, because the war was of God. And they lived in their place until the exile.

The Half-Tribe of Manasseh

The members of the half-tribe of Manasseh lived in the land. They were very numerous from Bashan to Baal-hermon, Senir, and Mount Hermon. These were the heads of their fathers’ houses: Epher, Ishi, Eliel, Azriel, Jeremiah, Hodaviah, and Jahdiel, mighty warriors, famous men, heads of their fathers’ houses. But they broke faith with the God of their fathers, and whored after the gods of the peoples of the land, whom God had destroyed before them. So the God of Israel stirred up the spirit of Pul king of Assyria, the spirit of Tiglath-pileser king of Assyria, and he took them into exile, namely, the Reubenites, the Gadites, and the half-tribe of Manasseh, and brought them to Halah, Habor, Hara, and the river Gozan, to this day.

“They cried out to Him during the battle.  He answered their prayers because they trusted in Him.”

What a powerful statement!  What an amazing thought to consider in the battles we ourselves face:  Pray and trust.  So many times we are more apt to dump our prayers and pleas before the throne but take things into our own hands in order to solve it.

I think of a friend who is struggling in a war with their wayward prodigal child.  As one who has never been in such a circumstance like this, I cannot imagine the daily battle of the mind even for victory in their own life let alone the child they’re interceding for.  But the battle is raw and real.

The defeats come through choices the child makes and cutting the parent off.  Oh, the child has had the seeds of truth sown in their hearts for years.  They know it. They simply don’t want it.  The battle for my friend is real and tangible.  It invades their thoughts and mind every single second and affects the way they live.

It brings such sadness to me as I observe this.  There is much to be said about living in victory even before the battle has been won.  Yes, many times it involves a mind over matter situation. It requires the taking of our thoughts captive daily and sometimes hourly.  But it also takes our complete trust in God who has heard our prayers and in His timing will bring resolve.  God’s timing is never ours.  We know this, but resting in such confidence is a different story.

For the tribes of Gad, as recorded here, they waged war with many nations.  They had joined forces with the Reubenites and half of Manasseh.  The battle fierce, they kept to the war and God heard their prayers and answered them.

Their success was not based on their able bodied men who fought but because they trusted God. They sought Him for direction and help and He strengthened them for victory.

What situation are you currently facing that is a never ending battle?  What is happening around you where you are called to the battlefield every single day and have little strength of your own?  This is that moment God is calling you to stand strong.  This is that moment where He’s asking you to trust Him. Keep your heart tender toward His voice.  Stay steady even though it feels things could not get worse. More often than not, God calls us to such places where He is about to show Himself in a way unseen in our experience before.  Cry out to God.  Quietly trust.  Keep your feet planted firmly.  Whatever this battle may be, it is not yours but His and will bring tremendous glory to His name when the victory is found.

For many fell, because the war was of God. And they lived in their place until the exile.

The people cried out to God and He heard them. He answered. Scripture says He granted their urgent plea because they trusted Him. The plan was set in their hearts but the Lord had gone before them.

Verse 22 is critical to understanding the characteristics of God. The war was of God. It was His battle to fight, and He would be the One to do the heavy lifting. The role of the people was trust. Essentially, it was faith.  But many times, we believe the battle is on our shoulders. We think that we’re the main characters in the story when really it’s all about Him.

How are we to go to war today? Scripture commands us to make war on the flesh. We are told to commit ourselves to God while resisting the devil and he will flee (Jam 4:7). First commit (trust), then resist. The word resist is not a passive word. It’s a call to offensive warfare.

Jesus has gone ahead of us. He not only declared the war was His, but He sealed the eternal victory. Now, just as before, we must place our trust in the One who has already won.

Look, we all get sidetracked with trying to win the war ourselves. The enemy would love to convince us that victory is dependent upon our own strength. He would love to burden us with the weight of responsibilities that we cannot control. The war is of the Lord. The question is, do you trust Him?