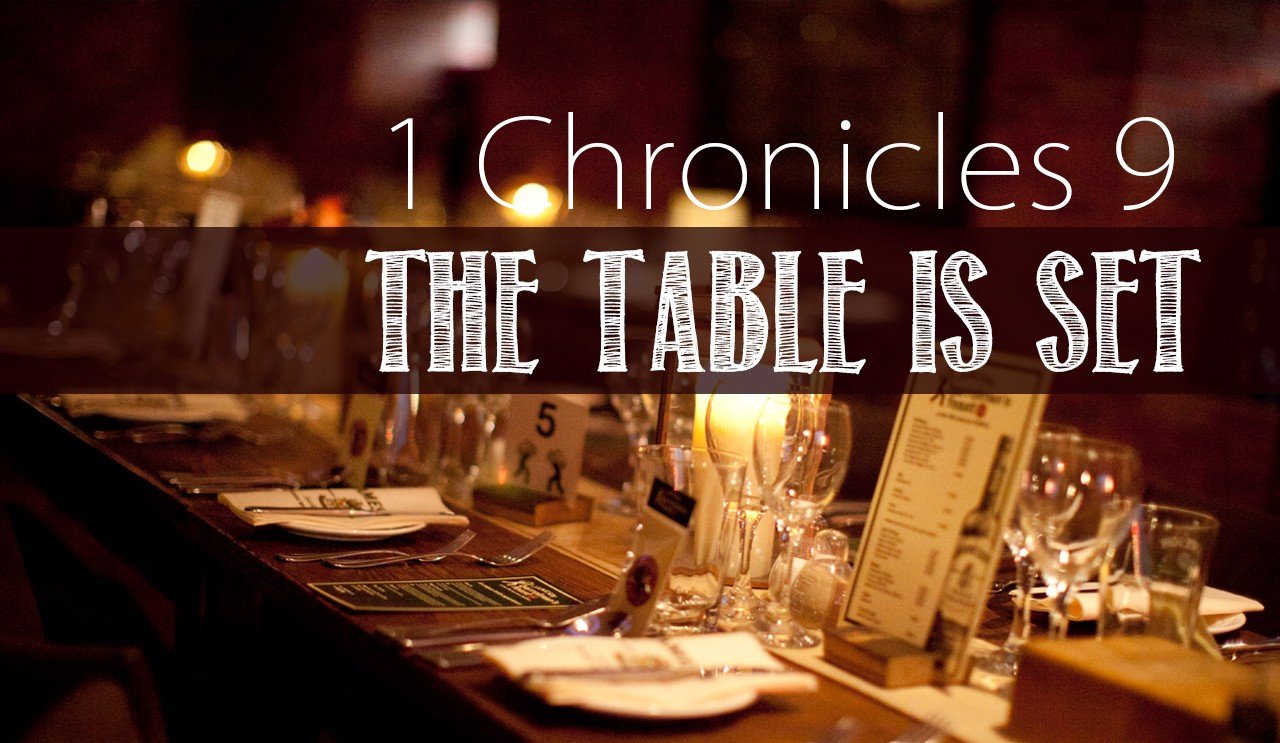 A Genealogy of the Returned Exiles

9 So all Israel was recorded in genealogies, and these are written in the Book of the Kings of Israel. And Judah was taken into exile in Babylon because of their breach of faith. Now the first to dwell again in their possessions in their cities were Israel, the priests, the Levites, and the temple servants. And some of the people of Judah, Benjamin, Ephraim, and Manasseh lived in Jerusalem: Uthai the son of Ammihud, son of Omri, son of Imri, son of Bani, from the sons of Perez the son of Judah. And of the Shilonites: Asaiah the firstborn, and his sons. Of the sons of Zerah: Jeuel and their kinsmen, 690. Of the Benjaminites: Sallu the son of Meshullam, son of Hodaviah, son of Hassenuah, Ibneiah the son of Jeroham, Elah the son of Uzzi, son of Michri, and Meshullam the son of Shephatiah, son of Reuel, son of Ibnijah; and their kinsmen according to their generations, 956. All these were heads of fathers’ houses according to their fathers’ houses.

The gatekeepers were Shallum, Akkub, Talmon, Ahiman, and their kinsmen (Shallum was the chief); until then they were in the king’s gate on the east side as the gatekeepers of the camps of the Levites. Shallum the son of Kore, son of Ebiasaph, son of Korah, and his kinsmen of his fathers’ house, the Korahites, were in charge of the work of the service, keepers of the thresholds of the tent, as their fathers had been in charge of the camp of the LORD, keepers of the entrance. And Phinehas the son of Eleazar was the chief officer over them in time past; the LORD was with him. Zechariah the son of Meshelemiah was gatekeeper at the entrance of the tent of meeting. All these, who were chosen as gatekeepers at the thresholds, were 212. They were enrolled by genealogies in their villages. David and Samuel the seer established them in their office of trust. So they and their sons were in charge of the gates of the house of the LORD, that is, the house of the tent, as guards. The gatekeepers were on the four sides, east, west, north, and south. And their kinsmen who were in their villages were obligated to come in every seven days, in turn, to be with these, for the four chief gatekeepers, who were Levites, were entrusted to be over the chambers and the treasures of the house of God. And they lodged around the house of God, for on them lay the duty of watching, and they had charge of opening it every morning.

Some of them had charge of the utensils of service, for they were required to count them when they were brought in and taken out. Others of them were appointed over the furniture and over all the holy utensils, also over the fine flour, the wine, the oil, the incense, and the spices. Others, of the sons of the priests, prepared the mixing of the spices, and Mattithiah, one of the Levites, the firstborn of Shallum the Korahite, was entrusted with making the flat cakes. Also some of their kinsmen of the Kohathites had charge of the showbread, to prepare it every Sabbath.

In Gibeon lived the father of Gibeon, Jeiel, and the name of his wife was Maacah, and his firstborn son Abdon, then Zur, Kish, Baal, Ner, Nadab, Gedor, Ahio, Zechariah, and Mikloth; and Mikloth was the father of Shimeam; and these also lived opposite their kinsmen in Jerusalem, with their kinsmen. Ner fathered Kish, Kish fathered Saul, Saul fathered Jonathan, Malchi-shua, Abinadab, and Eshbaal. And the son of Jonathan was Merib-baal, and Merib-baal fathered Micah. The sons of Micah: Pithon, Melech, Tahrea, and Ahaz. And Ahaz fathered Jarah, and Jarah fathered Alemeth, Azmaveth, and Zimri. And Zimri fathered Moza. Moza fathered Binea, and Rephaiah was his son, Eleasah his son, Azel his son. Azel had six sons and these are their names: Azrikam, Bocheru, Ishmael, Sheariah, Obadiah, and Hanan; these were the sons of Azel.

Let’s say you have an important meeting.  It’s one you’ve anticipated with another about a project or even a heartfelt conversation.  You’ve set the date, worked your calendar that day and prepared your thoughts.  You head off to that appointment confident and with anticipation of great things to come from it.

Or let’s say you’re having a dinner party.  You’ve set the menu, sent the invites and in the lead-up to this event, you’ve been busy preparing yourself for a great evening around the table.  As the hour of arrival comes closer you’re checking off your list, making sure everything is “just right” and prepared on every level for what will be a memorable time.

We plan and prepare ourselves for such events.  Obviously, we want everything to be perfect.  Whether it is a gathering of friends and loved ones or someone of importance in our business world we always make sure we’re on time, ready to go and prepared.

So… every week there is a meeting that has been offered to us by the King of kings.  He has set the table through His servants for an experience with Him where He can speak boldly and lovingly into our lives.  It is a time where we come to meet with Him, be renewed in strength and hear from His Word as He speaks to our lives and situations.

How prepared are you for your time each Sunday to meet with Jesus?

The gatekeepers mentioned in this passage had specific responsibilities to ensure everything about worship for the people of Israel was good and right.  They had positions they stood at, daily chores to ensure everything about the Temple ran smoothly, with trust and integrity they had to count the gifts brought after each service.  Their position of opening the gates each day to the Temple was crucial.  The priests had strong responsibilities as well.  They were asked to spend much time in preparation for their services.  Leviticus 1-9 records they had quite complicated tasks.  They took care of many preliminary things before any service commenced.

You see, there’s a lot that goes into any worship service.  Whatever church you attend there are those who come together behind the scenes and make things happen with a lot of preparation to ensure their people come into the presence of God through all the elements incorporated.  How much are you taking for granted the people in leadership of your congregation and all they do?

But more importantly, consider your attitude before you simply ‘show up’ for a service.  Besides the fact so much time and energy has been given toward that hour there is something far more important to consider.

Jesus is looking forward to this time. He longs to meet with you as a Body of Believers but also desires to speak individually to you through the worship and Word given.  How prepared are you?

How often do you simply take this unbelievable invitation from Jesus for granted?  Sadly for many, we give our secular meetings or dinner parties more attention than we do to our responding to Jesus’ weekly invitation.  We come unprepared.  We show up with trouble on our minds from the previous week.  We let everything dictate our thinking that morning except one thing:  Jesus wants to meet with us.  The Holy Spirit has been at work to the build-up.  God the Father has a message through either the worship or the Word for us to hear.

What would change personally if you were more prepared each week for worship and meeting with the King of kings?

Psalms 99:5-6 ESV Exalt the LORD our God; worship at his footstool! Holy is he! 6 Moses and Aaron were among his priests, Samuel also was among those who called upon his name. They called to the LORD, and he answered them.

Samuel was the last of the judges but was also considered the first of the prophets. He came along at an interesting time in history as Israel had not yet had a king. His life was full of faithful service to the Lord. A great example of that is what we read here in 1 Chronicles 9. The 212 gatekeepers were established by Samuel and most likely reformed by David. Both of these faithful men used their lives to train others up in the faith.

“The gatekeepers had been appointed in the days of David and Samuel (1Ch 26:1-19). Since Samuel died long before David made his appointments, the chronicler must be saying that David was encouraged and instructed by the prophet from the days of his youth. In a sense, Samuel appointed the gatekeepers through David.”

The temple work involved a detailed regimen of specific tasks. Each worker had a responsibility and a timeframe in which to accomplish the work. They structured their lives around their service to God. Some of these responsibilities were done directly toward God and some of them were done toward the house of God. Others were directed at their fellow Israelites who were dependant upon the Levites to fulfill their obligations.

The priests would have been descendants of Aaron, the first high priest, and they would have taken up the responsibility of temple work and offering sacrifices. The Levites had a diverse set of tasks that corresponded with the practical needs of the community. Their work set the table for the spiritual nourishment of the people. The Nethinim were considered special assistants to the Levites. Many speculate they were Gentiles who had been assigned to this work after being captured in battle (Numbers 31:30).

Overall, the over point is clear. This community was dedicated to God had many working parts which would only be effective if every worker stuck to their role. There was no room for laziness or jealousy. Unfortunately, in recent times, a consumerist mentality has swept over the western church. Many believers want a church that serves them instead of finding a body where they can serve. Though the church should allow for both, we must remember that the church is a living organism fueled by individual parts working as one. When one member suffers, the entire body will suffer.