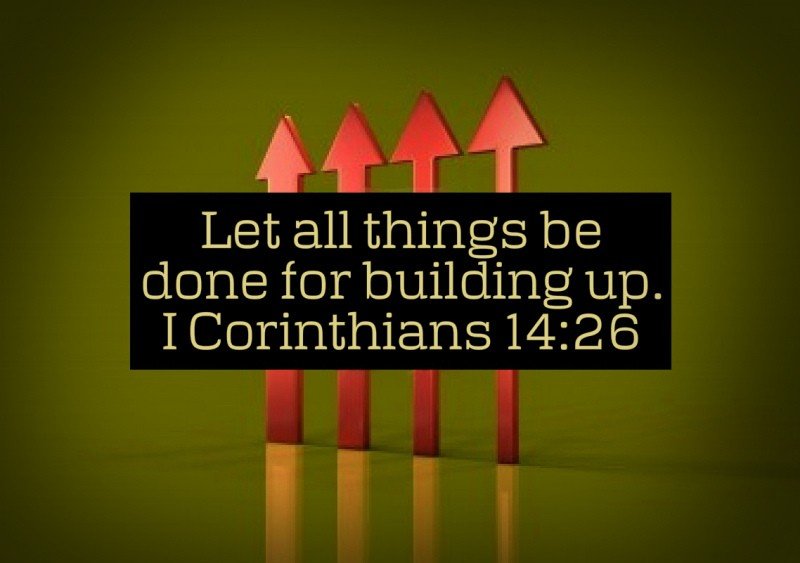 Now, brothers, if I come to you speaking in tongues, how will I benefit you unless I bring you some revelation or knowledge or prophecy or teaching? If even lifeless instruments, such as the flute or the harp, do not give distinct notes, how will anyone know what is played? And if the bugle gives an indistinct sound, who will get ready for battle? So with yourselves, if with your tongue you utter speech that is not intelligible, how will anyone know what is said? For you will be speaking into the air. There are doubtless many different languages in the world, and none is without meaning, but if I do not know the meaning of the language, I will be a foreigner to the speaker and the speaker a foreigner to me. So with yourselves, since you are eager for manifestations of the Spirit, strive to excel in building up the church.

Therefore, one who speaks in a tongue should pray that he may interpret. For if I pray in a tongue, my spirit prays but my mind is unfruitful. What am I to do? I will pray with my spirit, but I will pray with my mind also; I will sing praise with my spirit, but I will sing with my mind also. Otherwise, if you give thanks with your spirit, how can anyone in the position of an outsider say “Amen” to your thanksgiving when he does not know what you are saying? For you may be giving thanks well enough, but the other person is not being built up. I thank God that I speak in tongues more than all of you. Nevertheless, in church I would rather speak five words with my mind in order to instruct others, than ten thousand words in a tongue.

Brothers, do not be children in your thinking. Be infants in evil, but in your thinking be mature. In the Law it is written, “By people of strange tongues and by the lips of foreigners will I speak to this people, and even then they will not listen to me, says the Lord.” Thus tongues are a sign not for believers but for unbelievers, while prophecy is a sign not for unbelievers but for believers. If, therefore, the whole church comes together and all speak in tongues, and outsiders or unbelievers enter, will they not say that you are out of your minds? But if all prophesy, and an unbeliever or outsider enters, he is convicted by all, he is called to account by all, the secrets of his heart are disclosed, and so, falling on his face, he will worship God and declare that God is really among you.

What then, brothers? When you come together, each one has a hymn, a lesson, a revelation, a tongue, or an interpretation. Let all things be done for building up. If any speak in a tongue, let there be only two or at most three, and each in turn, and let someone interpret. But if there is no one to interpret, let each of them keep silent in church and speak to himself and to God. Let two or three prophets speak, and let the others weigh what is said. If a revelation is made to another sitting there, let the first be silent. For you can all prophesy one by one, so that all may learn and all be encouraged, and the spirits of prophets are subject to prophets. For God is not a God of confusion but of peace.

As in all the churches of the saints, the women should keep silent in the churches. For they are not permitted to speak, but should be in submission, as the Law also says. If there is anything they desire to learn, let them ask their husbands at home. For it is shameful for a woman to speak in church.

Or was it from you that the word of God came? Or are you the only ones it has reached? If anyone thinks that he is a prophet, or spiritual, he should acknowledge that the things I am writing to you are a command of the Lord. If anyone does not recognize this, he is not recognized. So, my brothers, earnestly desire to prophesy, and do not forbid speaking in tongues. But all things should be done decently and in order.

Several years ago, then superstar Adele performed at an award show.  People were anticipating such a terrific performance as she never disappointed.  That live performance would be one of her biggest nightmares.  Her voice was pitchy where she seemingly couldn’t hit any of the notes.  As the song continued, people were growing uncomfortable and baffled.  Adele has one killer voice but this was nothing like what they expected.  It was almost like a karaoke party where the person steps up and completely slaughters the song.

Come to find out, a mic had fallen into a piano and threw everything off.  The music became distorted and she couldn’t hear herself properly among a list of other aspects that went completely wrong.  Never had there been a time when people became anxious to have Adele stop singing.  The song couldn’t end fast enough.

The reality is spiritual gifts are beneficial for the church and the building up of it.

At one point he writes “Let all things be done for edification.” (1 Corinthians 14:26). As with the story of Adele, for things to build the body up all must be functioning in and with order. In our worship, all things must be done in harmony and with the Spirit. Even within the gifts He has given, there is no excuse for disorder. Chaos brings confusion and is not of Him.

Our goal in coming together as a Body of Believers is not to be entertained or even to be ‘pleased’. We come together so that we may encounter the Presence of Jesus, find ourselves built up in Him and consequently be able to live our lives from that experience in order to bring glory to Jesus. In Ephesians Paul wrote about the goal of being equipped through our worship and time together is to edify the body of Christ.

“And He gave some as apostles, and some as prophets, and some as evangelists, and some as pastors and teachers, 12 for the equipping of the saints for the work of service, to the building up of the body of Christ; 13 until we all attain to the unity of the faith, and of the knowledge of the Son of God, to a mature man, to the measure of the stature which belongs to the fullness of Christ.”

Paul’s stance on tongues is clear. If there is no interpretation, that message is lost when shared with the body. Tongues without interpretation have no place in corporate gatherings. They are meant for personal edification and should be kept there. Using this logic, Paul would rather us prophesy than speak in tongues because prophecy benefits the entire body as it is able to be understood by everyone. Furthermore, prophecy is greater than tongues because, in the end, tongues with an interpretation simply equals prophecy.

Prophets in the OT naturally spoke more into future events because they were declaring new revelations that would eventually be recorded to become the full canon of Scripture. Today, authentic prophets who speak God’s voice do not make mistakes, and they also will never contradict Scripture. God gave us His inspired Word in black and white, so it is a more certain and verifiable revelation than a person’s internal thoughts, and thus, should be regarded as a higher authority.

If a prophet is one who reveals truth, a teacher is one who explains truth. This is why Paul is urging the Corinthians to work together – it is for the sake of the Gospel going forward. A so-called prophet that reveals “truth” but is resistant toward judgment and teaching is not a true prophet of God.

Let two or three prophets speak, and let the others pass judgment.

Paul’s overall theme here is encouraging the believers at Corinth to do what is most beneficial for the Gospel. Many people today love the notoriety that comes with being a prophet or speaking in tongues. But Paul was concerned with the flock. If the entire body was speaking in tongues without an interpretation, nonbelievers who entered into their congregation would never hear the truth and probably leave thinking they were crazy!

I have a friend who led her elderly neighbor to Christ by going over to his house once a week and bringing him a frozen meal. She would sit with him as he ate and read from a children’s bible. As he ate his food, tears would fill his eyes. One evening, he asked how he could repent of his sin and ask Jesus into his heart. The power of God is found in the simple truth of the Gospel. If we aren’t doing that, what are we really doing?