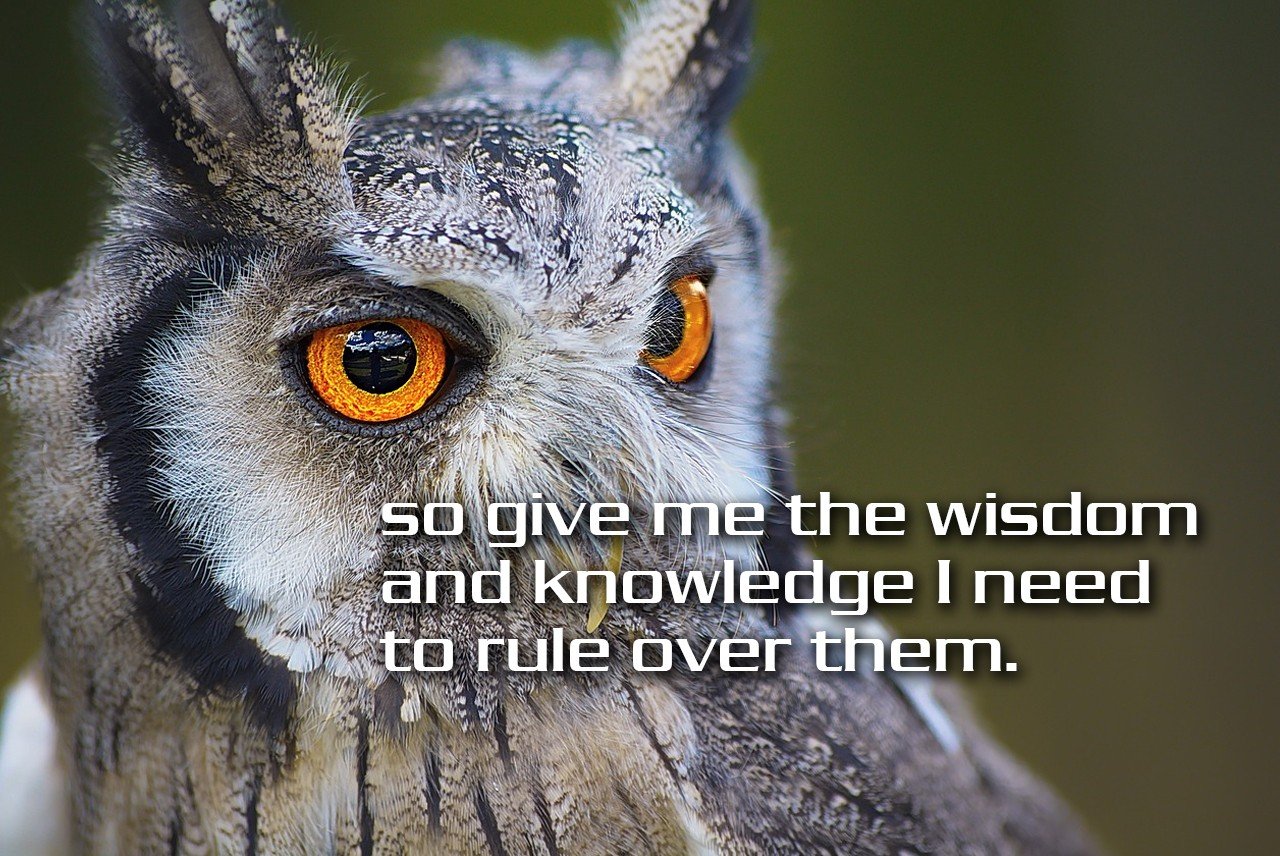 1 Solomon the son of David established himself in his kingdom, and the LORD his God was with him and made him exceedingly great.

Solomon spoke to all Israel, to the commanders of thousands and of hundreds, to the judges, and to all the leaders in all Israel, the heads of fathers’ houses. And Solomon, and all the assembly with him, went to the high place that was at Gibeon, for the tent of meeting of God, which Moses the servant of the LORD had made in the wilderness, was there. (But David had brought up the ark of God from Kiriath-jearim to the place that David had prepared for it, for he had pitched a tent for it in Jerusalem.) Moreover, the bronze altar that Bezalel the son of Uri, son of Hur, had made, was there before the tabernacle of the LORD. And Solomon and the assembly sought it out. And Solomon went up there to the bronze altar before the LORD, which was at the tent of meeting, and offered a thousand burnt offerings on it.

In that night God appeared to Solomon, and said to him, “Ask what I shall give you.” And Solomon said to God, “You have shown great and steadfast love to David my father, and have made me king in his place. O LORD God, let your word to David my father be now fulfilled, for you have made me king over a people as numerous as the dust of the earth. Give me now wisdom and knowledge to go out and come in before this people, for who can govern this people of yours, which is so great?” God answered Solomon, “Because this was in your heart, and you have not asked for possessions, wealth, honor, or the life of those who hate you, and have not even asked for long life, but have asked for wisdom and knowledge for yourself that you may govern my people over whom I have made you king, wisdom and knowledge are granted to you. I will also give you riches, possessions, and honor, such as none of the kings had who were before you, and none after you shall have the like.” So Solomon came from the high place at Gibeon, from before the tent of meeting, to Jerusalem. And he reigned over Israel.

Solomon gathered together chariots and horsemen. He had 1,400 chariots and 12,000 horsemen, whom he stationed in the chariot cities and with the king in Jerusalem. And the king made silver and gold as common in Jerusalem as stone, and he made cedar as plentiful as the sycamore of the Shephelah. And Solomon’s import of horses was from Egypt and Kue, and the king’s traders would buy them from Kue for a price. They imported a chariot from Egypt for 600 shekels of silver, and a horse for 150. Likewise through them these were exported to all the kings of the Hittites and the kings of Syria.

The first book of Chronicles holds such importance as it reveals from beginning to end of peoples need to be in a dependent relationship with God.  From the genealogies speaking toward how critical a solid spiritual heritage was to the life of David, it stands as a testimony to those who were faithful to God and how He worked through them.  Sadly the second book reveals what happens when we take our eyes off Him and how quickly things can go south.  Failure to have our feet firmly planted in God brings failure.

Israel was chosen to be God’s children and reflect His character.  Too quickly they forgot this calling and began putting their faith in idols of the land.  God raised up prophets, priests and even hit them with judgment all with repercussions to drive them back to Him.  At times it worked, other times they simply continued in their ways which brought costly results.  Chaos reigned, uncertainty pressed in and ultimately they were carried off to captivity.

Ezra who wrote this volume as well had one intention for the initial readers and us today.  He wanted to remind them of their past so they would not make the same mistakes.  Beginning with Solomon we walk through all the kings who followed.  Most were evil, just a handful were actually men who turned back to God and brought revival to the land.

As the wind of the Spirit sweeps across our hearts within that whisper is a calling.  We all have been given opportunity to serve our Savior Jesus and make a difference for Him.  His desire is we are effective wherever we may find ourselves, keep our eyes steadily on Him and make wise and discerning choices.  His calling resonates to the core of our being but still requires one thing from us:  obedience.

Take heed to the stories you are about to read.  Embrace the inspiration that comes with the few kings who truly followed and what that entailed.  Let these stories inspire your own placement and what God is doing.  Dig into their dependence on Him and discover how this speaks to you today.  But also consider the challenge that comes through the kings who were self-serving and brought destruction.  Our feet can easily stray from the path God has laid out. Destruction followed and affected generations.  So our own self-interest and lack of obedience bring the same things.

Solomon commanded the people to go to a high place of worship at Gibeon. This was the location of the tabernacle. It is the same tabernacle that the children of Israel built after wandering in the wilderness. Of course, Solomon was going to build a new permanent temple in Jerusalem, but for the time being, this was it. Solomon’s father, King David, moved the ark of the covenant to Jerusalem, so the natural question would be, why didn’t he also move the tabernacle?

David knew a permanent temple was coming, so there was no reason to focus the attention and resources on the tabernacle. If he were to move the tabernacle, he would risk losing the support for a new temple because some people might have been satisfied to simply have a tabernacle in Jerusalem.

Another characteristic of the tabernacle’s location was the fact that it was situated on a “high place.” What was the significance of a high place?  There is evidence this term began as a sacred rite throughout the pagan world. It was seen as a location between heaven and earth where people could have a place of meeting. Going to a high place to sacrifice was routinely exemplified in pagan rituals by the Canaanites. This was true of animal sacrifice in general.

When God established His covenant with Israel, He took what was familiar to their culture and sanctified it. I can think of many examples where a high place shows up in both the Old and New Testaments. Two good examples would be Abraham and Isaac as well as The Transfiguration of Jesus. In other words, the pagans did not have ownership over the “high place.” The location was not inherently evil. Using the location for the worship of false gods, however, was evil. Although animal sacrifice and the “high place” was used with evil in mind, God repurposed it for His glory.

I remember going to the Ichthus music festival for several years in a row when I first got into ministry. It’s basically a Christian Woodstock. We would go and attend multiple concerts throughout the day from sunrise until 3 am the next day. The lineup included every genre of music. Country, rap, rock, screamo, techno, and death metal. If I’m honest, many of them sounded “evil.” Especially the artists who were screaming horrifically into the microphone.

However, when I heard those same artists talk after the show and give their personal testimony, it was apparent to me that the genre of music was not inherently evil. It was simply the delivery method for their heart’s intent. Although their music was not my personal style, it was glorifying God. Of course, the Holy Spirit’s discernment is always required in these situations as the Bible warns us of wolves in sheep’s clothing. However, we must be slow to cast judgment on particular practices with sweeping statements.

So, are Christmas trees, yoga, and acupuncture good or evil? This is why God has given us the Holy Spirit and His Word. We must search for the intention of our hearts while also taking into consideration the theological ramifications of our decisions. The point here in 2 Chronicles 1 is that though the high place originated from a blatantly anti-God perspective, it was used later to worship Him. Even though rock music has been considered evil by many Christians over the years, we know that it has been used by Christian artists to glorify God and draw others into worship.

This is not to say that everything is subjective and based only on intent. There are lines to be drawn between good and evil and the Bible makes that clear. But the caution here is that we would navigate these issues within our relationship with Jesus and not just based on how we feel about something. God has promised to give us everything we need to live a holy life! Seek Him on these issues!