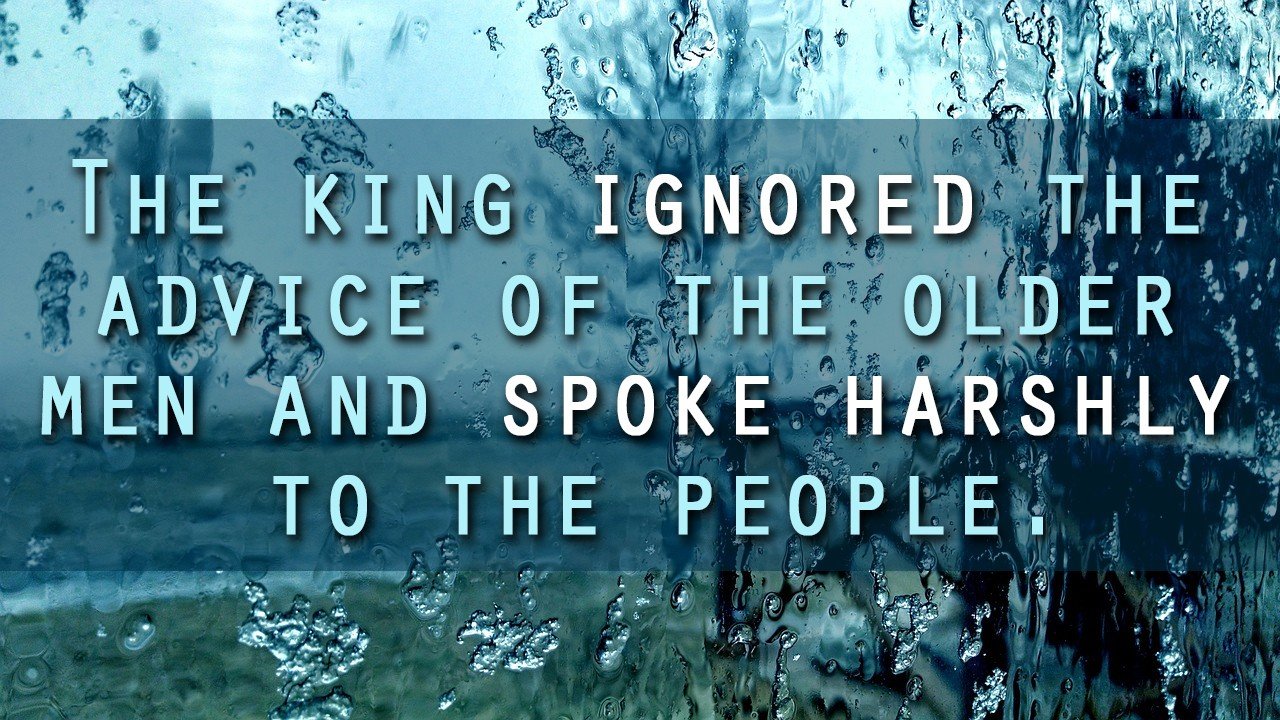 The Revolt Against Rehoboam

10 Rehoboam went to Shechem, for all Israel had come to Shechem to make him king. And as soon as Jeroboam the son of Nebat heard of it (for he was in Egypt, where he had fled from King Solomon), then Jeroboam returned from Egypt. And they sent and called him. And Jeroboam and all Israel came and said to Rehoboam, “Your father made our yoke heavy. Now therefore lighten the hard service of your father and his heavy yoke on us, and we will serve you.” He said to them, “Come to me again in three days.” So the people went away.

Then King Rehoboam took counsel with the old men, who had stood before Solomon his father while he was yet alive, saying, “How do you advise me to answer this people?” And they said to him, “If you will be good to this people and please them and speak good words to them, then they will be your servants forever.” But he abandoned the counsel that the old men gave him, and took counsel with the young men who had grown up with him and stood before him. And he said to them, “What do you advise that we answer this people who have said to me, ‘Lighten the yoke that your father put on us’?” And the young men who had grown up with him said to him, “Thus shall you speak to the people who said to you, ‘Your father made our yoke heavy, but you lighten it for us’; thus shall you say to them, ‘My little finger is thicker than my father’s thighs. And now, whereas my father laid on you a heavy yoke, I will add to your yoke. My father disciplined you with whips, but I will discipline you with scorpions.’”

So Jeroboam and all the people came to Rehoboam the third day, as the king said, “Come to me again the third day.” And the king answered them harshly; and forsaking the counsel of the old men, King Rehoboam spoke to them according to the counsel of the young men, saying, “My father made your yoke heavy, but I will add to it. My father disciplined you with whips, but I will discipline you with scorpions.” So the king did not listen to the people, for it was a turn of affairs brought about by God that the LORD might fulfill his word, which he spoke by Ahijah the Shilonite to Jeroboam the son of Nebat.

And when all Israel saw that the king did not listen to them, the people answered the king, “What portion have we in David? We have no inheritance in the son of Jesse. Each of you to your tents, O Israel! Look now to your own house, David.” So all Israel went to their tents. But Rehoboam reigned over the people of Israel who lived in the cities of Judah. Then King Rehoboam sent Hadoram, who was taskmaster over the forced labor, and the people of Israel stoned him to death with stones. And King Rehoboam quickly mounted his chariot to flee to Jerusalem. So Israel has been in rebellion against the house of David to this day.

We may not go to a website for it but many of us scroll through the offers of others as we seek counsel. Adviceshopping.com would be a hit I imagine if there was such a site.

Many times when we are seeking a decision on a matter we tend to go to those who are like-minded.  If they’re godly people, this usually is not an issue.  A godly individual will advise with spiritual lenses.  But more often than not, we seek advice from those who have the same thought process of ourselves or see things the same way.  All too often the case, many people will seek advice based on what they want to hear and when they’ve finally landed on some affirmation of the same mindset will act.  This is always groundwork for bad decisions.

We read of such foolishness that brought severe division after the death of Solomon.  Rehoboam is the only son of Solomon mentioned by name.  He was a greedy power-hungry man who was determined to do things his way.  Selfish in his wants, lacking the wisdom and discernment his father had, he would almost lose everything based on a series of missteps at the beginning of his reign.  Listening to his friends rather than trusted advisers of Solomon was one of the first mistakes. It would be costly.  The incredibly peaceful kingdom under Solomon’s reign would be inundated with turmoil and the nation would divide into 2 kingdoms.  Only 2 tribes would stick with Rehoboam (Judah and Benjamin) with the remaining 10 following another king named Jeroboam.  I know, it gets confusing!

We need people in our lives who will speak truth no matter what.  We need those who are willing to tell it like it is, even if it means it’s pointed out that we are wrong in some situation.  This requires an honest relationship established on trust.  But it also demands we are humble.  There are many a people who refuse to admit when they’ve made a mistake even at the cost of things held dear.

Do you have such people in your life?  Are you able to admit your failure in some situation, owning up to it even though embarrassing?  A heart filled with pride will never admit a mistake was made.  A heart set on doing things your way will, in the end, bring division.

It seems like this whole situation began to unravel in such a short period of time. If we go back in history, however, we see that is not the case. This struggle to follow God and obey Him had been going on for years. If we look back at the book of Kings, we read that it was because of Solomon’s leadership that the nations began to crumble. Ahijah the prophet would be the one to relay the message directly from God.

Ahijah took off the new robe he was wearing, tore it into twelve pieces, 31 and said to Jeroboam, “Take ten pieces for yourself, because the LORD, the God of Israel, says to you, ‘I am going to take the kingdom away from Solomon, and I will give you ten tribes. 32 Solomon will keep one tribe for the sake of my servant David and for the sake of Jerusalem, the city I have chosen to be my own from the whole land of Israel. 33 I am going to do this because Solomon has rejected me and has worshiped foreign gods: Astarte, the goddess of Sidon; Chemosh, the god of Moab; and Molech, the god of Ammon. Solomon has disobeyed me; he has done wrong and has not kept my laws and commands as his father David did.

Jeroboam was one of Solomon’s former officials. He would take the northern tribes of Israel when it was all said and done. In fact, we read here in 2 Chronicles that when Solomon learned of this prophecy he wanted to kill Jeroboam who ended up he fleeing to Egypt. In the meantime, Rehoboam, Solomon’s son, would end up becoming king after Solomon died. When Jeroboam (a “mighty man of valor”) returned from Egypt, he warned Rehoboam not to heavily tax the people like his father had. Here in 2 Chronicles 10, we read Rehoboam’s bold response.

The king ignored the advice of the older men and spoke harshly to the people, 14 as the younger men had advised. He said, “My father placed heavy burdens on you; I will make them even heavier. He beat you with whips; I’ll flog you with bullwhips!”

What started with Solomon ultimately affected the future of Israel’s leaders. The problems that now exist under Rehoboam did not happen overnight. In fact, the Lord began to slowly take the kingdom away long before. If we gain perspective into this choice by God, we realize just how gracious He really is. He could have stripped the throne away immediately, and it would have been completely justified.

Many times our struggles begin long before the actual downfall. This is why Scripture speaks so boldly of turning and repenting. This is also why Scripture encourages us to relentlessly proclaim the Message of Jesus Christ. Scatter the seed and let the Holy Spirit convict hearts. It’s very possible that one of those seeds could influence an entire generation.