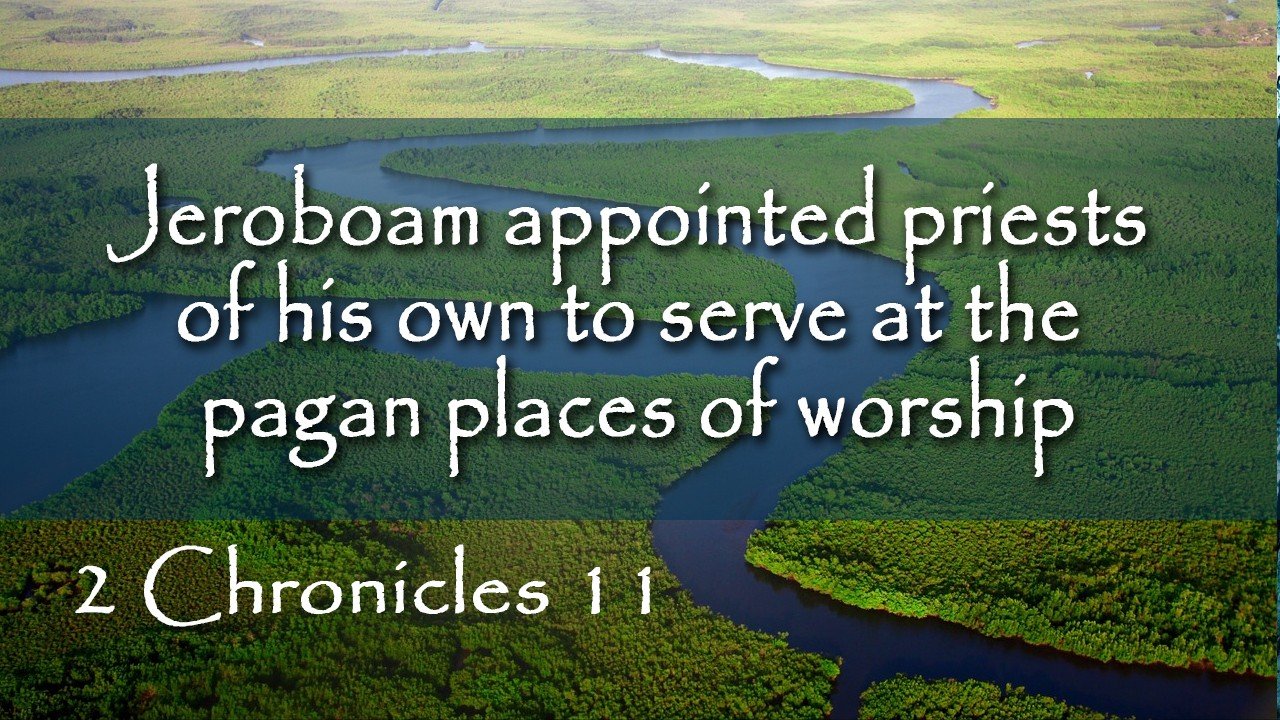 11 When Rehoboam came to Jerusalem, he assembled the house of Judah and Benjamin, 180,000 chosen warriors, to fight against Israel, to restore the kingdom to Rehoboam. But the word of the LORD came to Shemaiah the man of God: “Say to Rehoboam the son of Solomon, king of Judah, and to all Israel in Judah and Benjamin, ‘Thus says the LORD, You shall not go up or fight against your relatives. Return every man to his home, for this thing is from me.’” So they listened to the word of the LORD and returned and did not go against Jeroboam.

Rehoboam lived in Jerusalem, and he built cities for defense in Judah. He built Bethlehem, Etam, Tekoa, Beth-zur, Soco, Adullam, Gath, Mareshah, Ziph, Adoraim, Lachish, Azekah, Zorah, Aijalon, and Hebron, fortified cities that are in Judah and in Benjamin. He made the fortresses strong, and put commanders in them, and stores of food, oil, and wine. And he put shields and spears in all the cities and made them very strong. So he held Judah and Benjamin.

Priests and Levites Come to Jerusalem

And the priests and the Levites who were in all Israel presented themselves to him from all places where they lived. For the Levites left their common lands and their holdings and came to Judah and Jerusalem, because Jeroboam and his sons cast them out from serving as priests of the LORD, and he appointed his own priests for the high places and for the goat idols and for the calves that he had made. And those who had set their hearts to seek the LORD God of Israel came after them from all the tribes of Israel to Jerusalem to sacrifice to the LORD, the God of their fathers. They strengthened the kingdom of Judah, and for three years they made Rehoboam the son of Solomon secure, for they walked for three years in the way of David and Solomon.

Rehoboam took as wife Mahalath the daughter of Jerimoth the son of David, and of Abihail the daughter of Eliab the son of Jesse, and she bore him sons, Jeush, Shemariah, and Zaham. After her he took Maacah the daughter of Absalom, who bore him Abijah, Attai, Ziza, and Shelomith. Rehoboam loved Maacah the daughter of Absalom above all his wives and concubines (he took eighteen wives and sixty concubines, and fathered twenty-eight sons and sixty daughters). And Rehoboam appointed Abijah the son of Maacah as chief prince among his brothers, for he intended to make him king. And he dealt wisely and distributed some of his sons through all the districts of Judah and Benjamin, in all the fortified cities, and he gave them abundant provisions and procured wives for them.

Right time, right place, right words.  Ever had someone come across your path that speaks needed truth into a situation and then as quickly as they appeared, they were gone?  It really is one of the most amazing aspects of being part of the Body of Christ.  God orchestrates people to come across our lives at critical junctures where we are in need of guidance.  These whom God raises up direct their path across ours to speak His words of which we need to hear.

The united kingdom of Israel is disintegrating.  Rehoboam sought unwise counsel and the split moved to a deep chasm.  Grasping at straws he decided to bring the kingdom back together by force.  Enter a virtually unknown man, a prophet of God who spoke to Rehoboam and all the men of Judah and Benjamin to cease this venture.  It was not going to work.  God was up to something greater in their remaining 2 kingdoms.

Shemaiah is simply known as ‘the man of God.’  God would use him in this story and one following.  He heard directly from God, went where he needed to go and spoke what was given.  But virtually, this man would drop off the pages of Scripture after this story.  We know nothing of his family or upbringing.  As Charles Spurgeon writes, “He comes and goes… only fancy this one man constraining to peace a hundred and eighty thousand chosen men, warriors ready to fight against the house of Israel, by giving them in very plain, unpolished words, the simple command of God.”

The men listened and turned back from marching against the northern kingdom.

There are 2 things to consider with this chapter.

First, why would God be for the splitting of the nation?  The reality was Israel was in the throes of spiritual bankruptcy.  This was the beginning of His judgment for their rebellion.   Yet, in God thwarting Rehoboam from attempting to bring unity by force he was saving them from defeat.  Through this, He was preserving the lineage of David of which the Messiah would come.

The second thought to consider is wouldn’t it be great to be the one used by God in people’s circumstances like Shemaiah?  Wouldn’t it be an amazing thing to be so on point, so dialed into Him that when He simply said to go and gave the words we were used to be the right person at the right time and place?  As he was ‘the man of God’ it clarifies he was so attuned to Him he knew when to speak and act.  What if this is what God has been waiting for with you?  What would it take to be personally used in even random ways that could potentially change the trajectory of another’s life?

I hate to be pessimistic, but here in Chapter 11, we have bad going to worse. Rehoboam (Solomon’s son) was now the king of the southern tribes of Judah. Jeroboam (Solomon’s former official) was now the king of the northern tribes of Israel. The great divide in Israel’s history proved to be fatal for their spiritual condition. This is because both men decided they were going to do things their own way.

First, Rehoboam wanted to go to war. If it hadn’t been for God intervening, a civil war would have broken out. Ironically, though we read many chapters about the violence in the OT, this would be a case where the desire of God was revealed. He did not want His people going to war.

Next, we see the Levites choosing to minister to the southern kingdom. This was inevitable because the Levite priests were assigned to serve all the tribes of Israel. Now that they had separated and formed their own authority structures, it would be impossible for the priests to serve both sides. They chose the southern tribe of Judah most likely because Rehoboam was within the bloodline of David but also because Jeroboam directly prohibited them to serve his people.

After that, Jeroboam precedes to create false idols and assign his own priests to serve at these pagan sites. The bad decisions were piling up and this one is probably the most disturbing of this chapter. Jeroboam had decided that he was going to change things up. He substituted his own ways for the ways God had commanded for generations. This is a sobering reminder for Christians today.

A lot of times we try and find new ways to “fix” things when God has already spoken. God has given us our battleplan in His Word. We don’t need to look anywhere else and we don’t need to substitute our own methods in place of His!