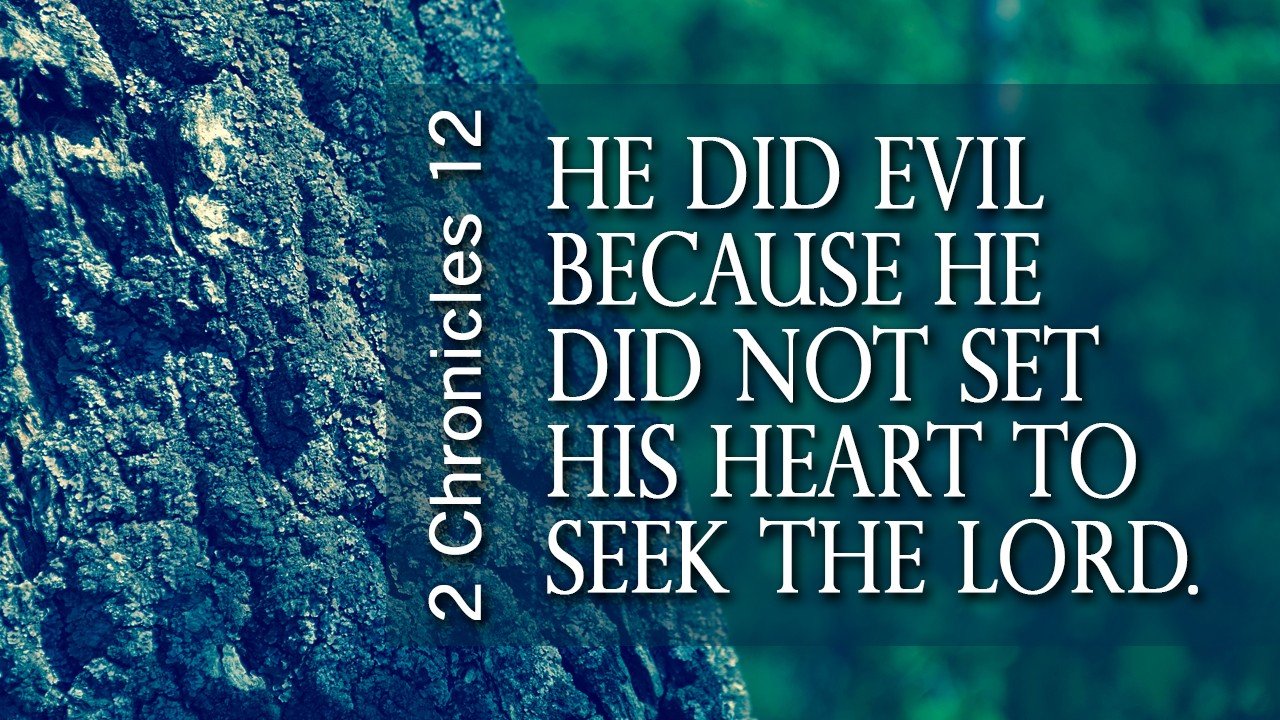 12 When the rule of Rehoboam was established and he was strong, he abandoned the law of the LORD, and all Israel with him. In the fifth year of King Rehoboam, because they had been unfaithful to the LORD, Shishak king of Egypt came up against Jerusalem with 1,200 chariots and 60,000 horsemen. And the people were without number who came with him from Egypt—Libyans, Sukkiim, and Ethiopians. And he took the fortified cities of Judah and came as far as Jerusalem. Then Shemaiah the prophet came to Rehoboam and to the princes of Judah, who had gathered at Jerusalem because of Shishak, and said to them, “Thus says the LORD, ‘You abandoned me, so I have abandoned you to the hand of Shishak.’” Then the princes of Israel and the king humbled themselves and said, “The LORD is righteous.” When the LORD saw that they humbled themselves, the word of the LORD came to Shemaiah: “They have humbled themselves. I will not destroy them, but I will grant them some deliverance, and my wrath shall not be poured out on Jerusalem by the hand of Shishak. Nevertheless, they shall be servants to him, that they may know my service and the service of the kingdoms of the countries.”

So Shishak king of Egypt came up against Jerusalem. He took away the treasures of the house of the LORD and the treasures of the king’s house. He took away everything. He also took away the shields of gold that Solomon had made, and King Rehoboam made in their place shields of bronze and committed them to the hands of the officers of the guard, who kept the door of the king’s house. And as often as the king went into the house of the LORD, the guard came and carried them and brought them back to the guardroom. And when he humbled himself the wrath of the LORD turned from him, so as not to make a complete destruction. Moreover, conditions were good in Judah.

So King Rehoboam grew strong in Jerusalem and reigned. Rehoboam was forty-one years old when he began to reign, and he reigned seventeen years in Jerusalem, the city that the LORD had chosen out of all the tribes of Israel to put his name there. His mother’s name was Naamah the Ammonite. And he did evil, for he did not set his heart to seek the LORD.

Now the acts of Rehoboam, from first to last, are they not written in the chronicles of Shemaiah the prophet and of Iddo the seer? There were continual wars between Rehoboam and Jeroboam. And Rehoboam slept with his fathers and was buried in the city of David, and Abijah his son reigned in his place.

In the bad times, it’s much easier to be in connection with God, serving Him.  In the good, well often we begin to neglect that relationship and pursue things of our own wants and desires.  Sometimes, actually often, God allows us to come to the end of ourselves to get back on track.  He allows difficulty, struggle, hardship to do one thing – draw a line in the sand of whom we will serve. The awful things that happen have a purpose in bringing us back to where we need to be in our relationship with Him.

Verse 1 says it all:

When Rehoboam had established his sovereignty and royal power, he abandoned the law of the LORD—he and all Israel with him.

When Rehoboam’s power and popularity hit full stride he hit a snag.  Things going well for the Southern Kingdom Judah, God stirred an Egyptian ruler to forge a plan of attack.  Egypt who had lost it’s world power years prior was attempting to regain some of that lost ground.  Ancient records indicate their invasion of Israel took them as far as the Sea of Galilee all the way into the Northern Kingdom.  Strength for this nation was not enough to take both Southern and Northern territories but he successfully destroyed some cities in Judah with the intention of ruling the trade routes.

God would use this to speak to the people, beginning with leadership and the king.  A line in the sand was drawn.

For Rehoboam, he got too cocky.  He was so satisfied with things in his leadership and the way things were going he neglected God.  If this isn’t bad enough what sticks out is his own disobedience and neglect affected the nation.  The people followed suit and left the God who had brought so many blessings to them.

Our actions have consequences, we all know this.  Often though we don’t think about how our actions also affect others following from behind.  Your friends, family, colleagues and so forth all may indeed follow after us.  We impact people every day and throughout this lifetime.  We’re playing out our relationship real time before others.  What are they gathering?  How are our decisions affecting them in their own personal relationship with Jesus?

“Rehoboam’s faith did not hold him. He held sometimes, but it never held him.”

Rehoboam did what was evil, because he did not determine in his heart to seek the LORD.

What happens to the person who doesn’t determine in his heart to seek after God? The result is evil. It doesn’t matter if the person has great intentions or not, which Rehoboam probably did. He had a foundation. His father was Solomon and his grandfather was David. He knew right from wrong and had witnessed with his very own eyes the faithfulness of God. Yet, after all this, the truth remains that he will be viewed as an evil king because he did not seek God with his heart.

Though we could say Rehoboam sought after God, he did not do it with a prepared heart. There is so much to be said about this. Ironically, this was exactly the phrase David left Solomon with before he died.

“As for you, Solomon my son, know the God of your father, and serve him wholeheartedly and with a willing mind, for the LORD searches every heart and understands the intention of every thought. If you seek him, he will be found by you, but if you abandon him, he will reject you forever.”

“You will call to me and come and pray to me, and I will listen to you. 13 You will seek me and find me when you search for me with all your heart.”

What does this mean practically? Most likely when we don’t seek him with our whole heart there is something else that is holding onto our heart. Just like a false idol, we can be stolen away from our first love. This happened with Solomon and it continued with Rehoboam. What we see from Rehoboam is someone who uses God only when he is in trouble. After everything is fine again, he goes back to doing things his own way. This is the absolute definition of not seeking with your whole heart.

Consider your relationship with God. Do you only come to Him when you need something?  Is your heart set to serve something or someone else?