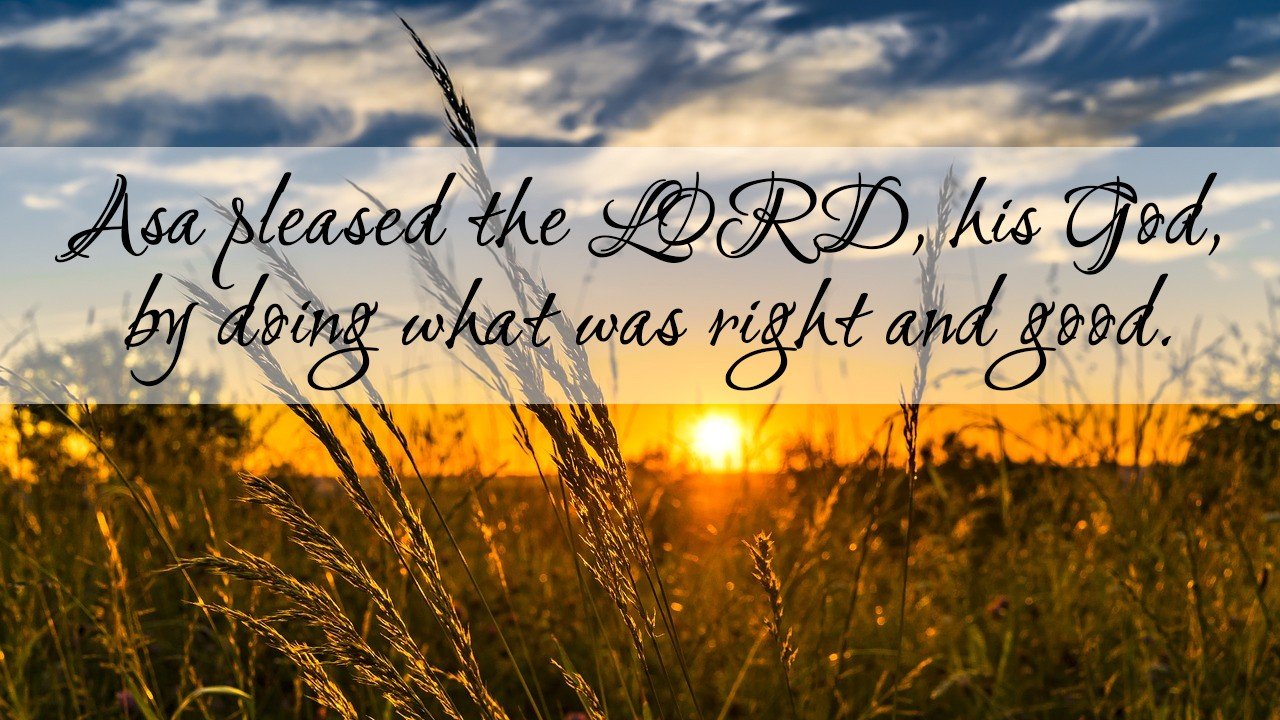 14 Abijah slept with his fathers, and they buried him in the city of David. And Asa his son reigned in his place. In his days the land had rest for ten years. And Asa did what was good and right in the eyes of the LORD his God. He took away the foreign altars and the high places and broke down the pillars and cut down the Asherim and commanded Judah to seek the LORD, the God of their fathers, and to keep the law and the commandment. He also took out of all the cities of Judah the high places and the incense altars. And the kingdom had rest under him. He built fortified cities in Judah, for the land had rest. He had no war in those years, for the LORD gave him peace. And he said to Judah, “Let us build these cities and surround them with walls and towers, gates and bars. The land is still ours, because we have sought the LORD our God. We have sought him, and he has given us peace on every side.” So they built and prospered. And Asa had an army of 300,000 from Judah, armed with large shields and spears, and 280,000 men from Benjamin that carried shields and drew bows. All these were mighty men of valor.

Zerah the Ethiopian came out against them with an army of a million men and 300 chariots, and came as far as Mareshah. And Asa went out to meet him, and they drew up their lines of battle in the Valley of Zephathah at Mareshah. And Asa cried to the LORD his God, “O LORD, there is none like you to help, between the mighty and the weak. Help us, O LORD our God, for we rely on you, and in your name we have come against this multitude. O LORD, you are our God; let not man prevail against you.” So the LORD defeated the Ethiopians before Asa and before Judah, and the Ethiopians fled. Asa and the people who were with him pursued them as far as Gerar, and the Ethiopians fell until none remained alive, for they were broken before the LORD and his army. The men of Judah carried away very much spoil. And they attacked all the cities around Gerar, for the fear of the LORD was upon them. They plundered all the cities, for there was much plunder in them. And they struck down the tents of those who had livestock and carried away sheep in abundance and camels. Then they returned to Jerusalem.

It’s a strange thing.  There are those who start their journey with God so well.  They radically come to Jesus and make bold choices to follow in their personal lives.  They eradicate things that have been part of their ways for years and seek after the right path and choices.  They flourish.  In such moments as an observer, we are inspired by who they are becoming.

Asa mirrors these thoughts.  For the next 3 chapters, we gain insight into this king who initially was amazing.  His coronation brought overhaul.  He did what was right in the eyes of God.  He worked on removing the high places of idol worship.  He boldly called and challenged Judah to seek the God of their fathers and pursue his ways in obedience.  And God blessed him in amazing ways.  But as we will read in chapters to come his last years brought a turn of the tide in his commitment.  It’s a fairly tragic story of a man who was on point for most of his reign.

Paul wrote a strong warning in his first letter to the church of Corinth.

“If you think you are standing firm, be careful that you don’t fall!”

This applies to all of us.  If we become too sure of ourselves, too confident of our decisions and lack the dependence on God daily, our toe slips over the line.  That slight movement can lead toward steps away from God.  When we begin to take for granted our relationship, when we choose to not consult Him on all matters, when we neglect things of Him and feed our souls spiritually, we are setting ourselves up for a downfall.  Asa is a stunning example of one who started so well who in the end gave into himself and was lost.

The attack that comes upon Israel is from the Ethiopians but that is deceiving. During this time Egypt had gained power. These Ethiopian forces were most likely mercenaries working for Egypt and were attempting to gain ground within Judah. Asa responded like a king should. He fell to his knees and dedicated the battle to the Lord. The fact that they were outnumbered certainly helped to draw this prayer out of the king.

Many times when we are overmatched and outnumbered, God has set the scene for us to come back and rely on Him. We see this throughout the New Testament as well.

7 But to keep me from being puffed up with pride because of the many wonderful things I saw, I was given a painful physical ailment, which acts as Satan’s messenger to beat me and keep me from being proud. 8 Three times I prayed to the Lord about this and asked him to take it away. 9 But his answer was: “My grace is all you need, for my power is greatest when you are weak.” I am most happy, then, to be proud of my weaknesses, in order to feel the protection of Christ’s power over me.

Continual reliance on Him usually means we must experience weakness. Otherwise, I can simply rely on myself to get the job done. It’s a basic but powerful thought. We usually complain when we are suffering. What if we genuinely allowed each trial to strengthen us by being joyful? It’s a radical and extremely difficult thought. But through Jesus, it is possible. To be able to say we are proud of our weakness because it allows us to feel the protection of Christ is an amazing feeling.