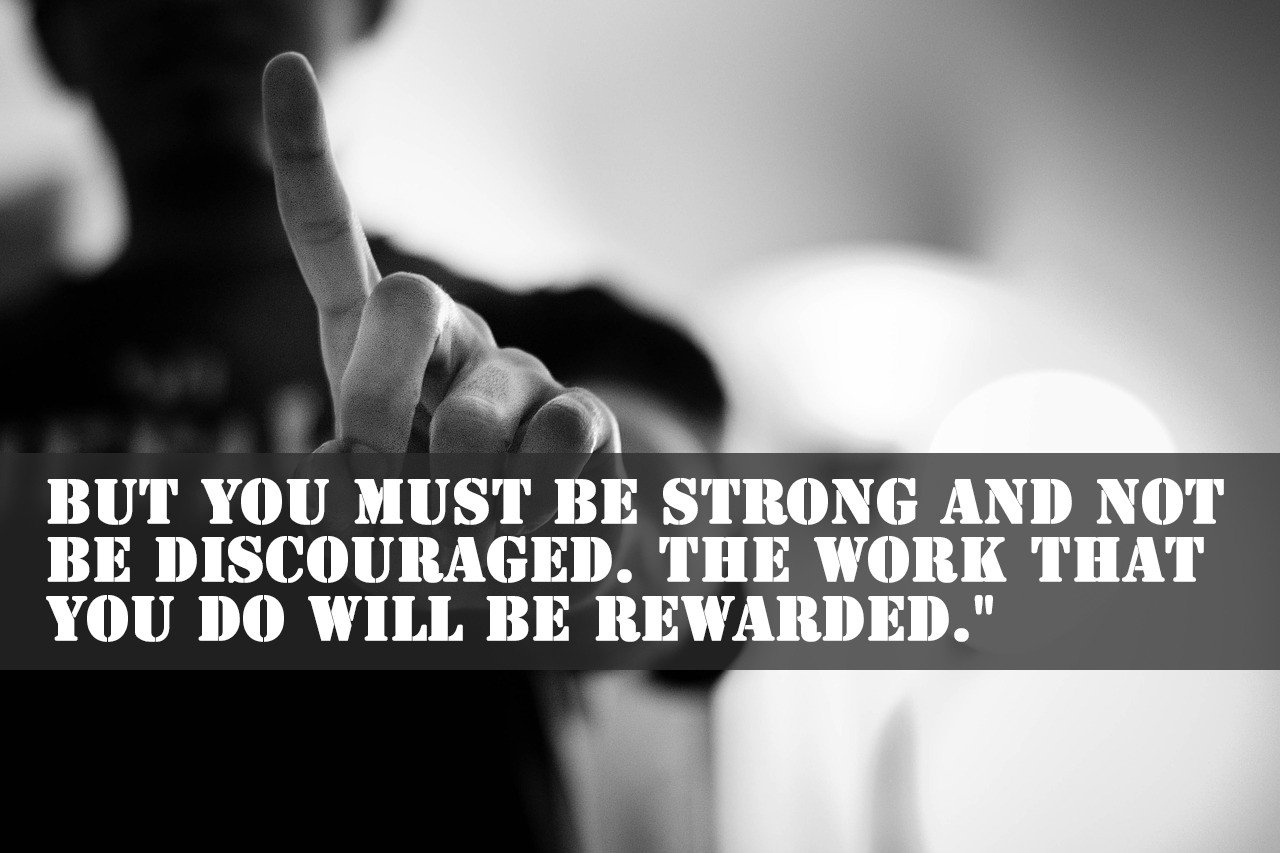 15 The Spirit of God came upon Azariah the son of Oded, and he went out to meet Asa and said to him, “Hear me, Asa, and all Judah and Benjamin: The LORD is with you while you are with him. If you seek him, he will be found by you, but if you forsake him, he will forsake you. For a long time Israel was without the true God, and without a teaching priest and without law, but when in their distress they turned to the LORD, the God of Israel, and sought him, he was found by them. In those times there was no peace to him who went out or to him who came in, for great disturbances afflicted all the inhabitants of the lands. They were broken in pieces. Nation was crushed by nation and city by city, for God troubled them with every sort of distress. But you, take courage! Do not let your hands be weak, for your work shall be rewarded.”

As soon as Asa heard these words, the prophecy of Azariah the son of Oded, he took courage and put away the detestable idols from all the land of Judah and Benjamin and from the cities that he had taken in the hill country of Ephraim, and he repaired the altar of the LORD that was in front of the vestibule of the house of the LORD. And he gathered all Judah and Benjamin, and those from Ephraim, Manasseh, and Simeon who were residing with them, for great numbers had deserted to him from Israel when they saw that the LORD his God was with him. They were gathered at Jerusalem in the third month of the fifteenth year of the reign of Asa. They sacrificed to the LORD on that day from the spoil that they had brought 700 oxen and 7,000 sheep. And they entered into a covenant to seek the LORD, the God of their fathers, with all their heart and with all their soul, but that whoever would not seek the LORD, the God of Israel, should be put to death, whether young or old, man or woman. They swore an oath to the LORD with a loud voice and with shouting and with trumpets and with horns. And all Judah rejoiced over the oath, for they had sworn with all their heart and had sought him with their whole desire, and he was found by them, and the LORD gave them rest all around.

Even Maacah, his mother, King Asa removed from being queen mother because she had made a detestable image for Asherah. Asa cut down her image, crushed it, and burned it at the brook Kidron. But the high places were not taken out of Israel. Nevertheless, the heart of Asa was wholly true all his days. And he brought into the house of God the sacred gifts of his father and his own sacred gifts, silver, and gold, and vessels. And there was no more war until the thirty-fifth year of the reign of Asa.

Nothing used to burn me up more than when my Mom would call me another name.  This wasn’t a slip of the tongue or because she was distracted.  It was by design.  She didn’t pull this tactic out much but when she did it was crystal clear why.

Usually, it would be in the middle of some argument we were having, where I was being terrible or hateful.  In my disrespect and rebellion she’d simply say something along the lines of, “Alright, John Smith…” (not the real name here) and I knew immediately how I was behaving.  It was a comparison to a person who was in the youth group that was a troublemaker and didn’t respect his parents or anyone else for that matter.  Honestly, this guy talked so much smack to his parents as an adult I don’t know how they did it.  He was just a nasty selfish guy who got his way all the time.

This creative parenting tactic did 2 things usually. It aggravated me because I didn’t want to be called this person’s name.  It also stopped me in my tracks.  I made a U-Turn of behavior because I knew exactly what she was implying and there was no way I was going to be as bad as this person.  I’ve heard of husbands calling their wives out by their mother’s name during arguments.  Um… I’m not so sure that’s always the best idea.

A fairly unknown prophet of Judah named Azariah went to meet Asa.  In a simple but bold statement, he drew the lines between Judah and Israel by a comparison.  Asa would sit on the throne of Judah for 41 years.  During this time the Northern Kingdom Israel would go through 8 kings.  Every single one of the Northern Kingdom’s rulers was evil.  Azariah wisely used the rebellion of the north as an example of what would happen to them if they embraced evil rather than seek God.

For Asa, it bolstered his courage and brought a resolve.

“The Lord is with you when you are with Him.  If you seek Him, He will be found by you, but if you forsake Him, He will forsake you.”

This thought is found throughout all of Scripture.  God is with you when you are pursuing Him.  If you’re not, He’s not.  God reveals Himself to us when we draw near to Him.  He reveals His plan, His word, His purpose.  When we are seeking Him with all our heart, all our ways, He doesn’t hide but confirms and encourages and leads.

“You will find Him when you seek Him with all your heart and soul.”

“And you will seek Me and find Me, when you search for Me with all your heart.”

“Ask and it will be given to you.  Seek and you will find.  Knock and the door will be opened to you.”

However, the flip side is also true.  If we forsake Him, not seek Him He will give us what we want.  Many times in such a process our hearts grow cold and hardened to His Spirit and well, we make terrible choices based on selfishness.  We reject what He wants and has for us.

What’s your seeking like these days?  Truly, think about it.  How much are you pursuing God daily for decisions and actions?  How much are you spending time with Him and listening?  You know, there are many things He wants to reveal to each of us.  I believe that.  But until we seek Him, look for Him, we won’t find Him even in such decisions.

Several years ago my wife was trying to get me onboard with adoption. Shamefully, I was hesitant. It just wasn’t the direction or the plan I thought would unfold. For months, she would beg me to consider the option and commit to getting our names on a list. I was stubborn. Mostly, I just kept putting it off hoping the decision would go away. Yes, it was completely selfish.

All that changed when I went to lunch with an acquaintance. He was a father who had adopted several children as well as having a few biological children as well. In a moment that was certainly led by the Holy Spirit, he said this, “Brad, if God adopted you into His family, what’s stopping you from adopting a child into yours?” It was that moment that changed everything. It was as if I was clubbed over the head with a sledgehammer… in a good way.

My mindset immediately changed. I went home and we started the paperwork. The rest, as they say, is history. We adopted our daughter in 2013 and she has melted my heart. I can’t imagine being reluctant to the idea of adoption ever again. But it took a special person filled with the Spirit to speak words of God’s truth to my heart. That’s how He operates.

In this chapter, we read of Azariah becoming full of God’s Spirit in order to confront King Asa. The text tells us that after these words are spoken the King is immediately encouraged. From there, he takes action.

When Asa heard the prophecy that Azariah son of Oded had spoken, he was encouraged. He did away with all the idols in the land of Judah and Benjamin and all the idols in the cities he had captured in the hill country of Ephraim. He also repaired the altar of the LORD that stood in the Temple courtyard.

Sometimes we are the Azariah in this story. God calls us to speak boldly to a person about a situation where He is not pleased. Sometimes, however, we are King Asa. We have grown stubborn in our own ways and refuse to change. The subtle sin nature has lulled us into a drowsiness. Either way, the miraculous truth is that God uses others to help us navigate our spiritual maturity. It doesn’t matter who we are or what our title is, all of us must fall under the authority of Christ. All of us need others in our life to hold us accountable.