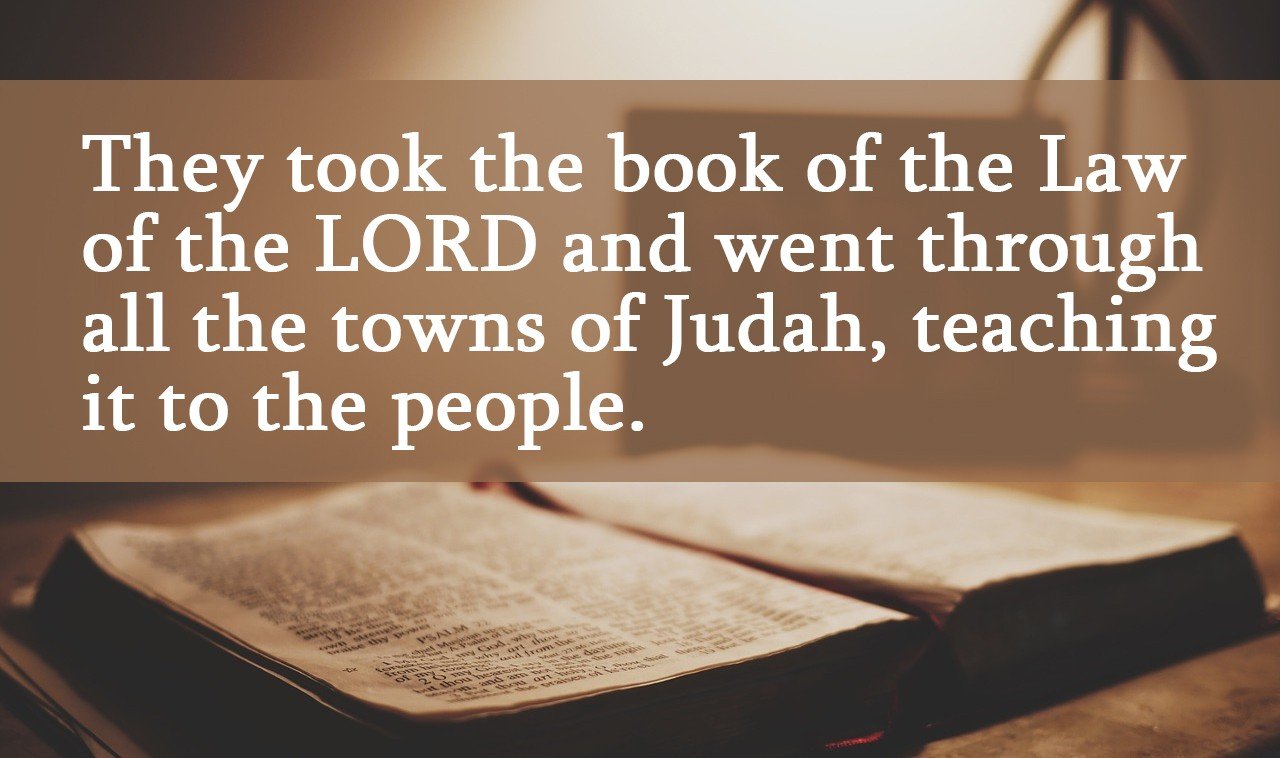 17 Jehoshaphat his son reigned in his place and strengthened himself against Israel. He placed forces in all the fortified cities of Judah and set garrisons in the land of Judah, and in the cities of Ephraim that Asa his father had captured. The LORD was with Jehoshaphat, because he walked in the earlier ways of his father David. He did not seek the Baals, but sought the God of his father and walked in his commandments, and not according to the practices of Israel. Therefore the LORD established the kingdom in his hand. And all Judah brought tribute to Jehoshaphat, and he had great riches and honor. His heart was courageous in the ways of the LORD. And furthermore, he took the high places and the Asherim out of Judah.

In the third year of his reign he sent his officials, Ben-hail, Obadiah, Zechariah, Nethanel, and Micaiah, to teach in the cities of Judah; and with them the Levites, Shemaiah, Nethaniah, Zebadiah, Asahel, Shemiramoth, Jehonathan, Adonijah, Tobijah, and Tobadonijah; and with these Levites, the priests Elishama and Jehoram. And they taught in Judah, having the Book of the Law of the LORD with them. They went about through all the cities of Judah and taught among the people.

And the fear of the LORD fell upon all the kingdoms of the lands that were around Judah, and they made no war against Jehoshaphat. Some of the Philistines brought Jehoshaphat presents and silver for tribute, and the Arabians also brought him 7,700 rams and 7,700 goats. And Jehoshaphat grew steadily greater. He built in Judah fortresses and store cities, and he had large supplies in the cities of Judah. He had soldiers, mighty men of valor, in Jerusalem. This was the muster of them by fathers’ houses: Of Judah, the commanders of thousands: Adnah the commander, with 300,000 mighty men of valor; and next to him Jehohanan the commander, with 280,000; and next to him Amasiah the son of Zichri, a volunteer for the service of the LORD, with 200,000 mighty men of valor. Of Benjamin: Eliada, a mighty man of valor, with 200,000 men armed with bow and shield; and next to him Jehozabad with 180,000 armed for war. These were in the service of the king, besides those whom the king had placed in the fortified cities throughout all Judah.

The good and the bad of our parental upbringing marks us.  We’ve all been shaped by how we were raised and how our parents modeled themselves.  There are the people who had a lot of difficulty and strain with their parents as how they were raised.  On many levels, for some, they use those memories and examples of how they don’t want to live or be.  They work hard on changing.  Most are successful.  There are others who had a tremendous childhood and the example their parents set before them is carried out into their adult life.

But the reality is for both type of examples, we have to work hard to become the people God desires us to be.  The negative effects of our parents – such as if they were manipulative, abusive, unfaithful, never admitting they’re being wrong is something we’ve felt the pain from and determine to change that ingrained modeled behavior.  It’s not easy.  The positive attributes of our parents have shaped us too like if they were faithful, committed to Jesus, prayed over everything, and had strong faith. These were living examples right before our eyes of someone who was sold out.

King Jehoshaphat was a man who had a father that was committed in the early tenure of his leadership and then failed at the end.  He had the good and the bad and it would be up to Jehoshaphat to work through these things in his own life to become the man God wanted him to be.  For the most part, he was pretty successful at this.  Overall he learned from his father’s mistakes and made changes.  He brought religious education to the nation.  He sought God when wars loomed.  When the odds were clearly stacked against him, his reliance was on the impossible outcome only God could bring.

The big things were huge where he relied on God.  It would be the smaller where he tended to waffle and fail.  He allowed his son to marry the daughter of one of the evilest kings of Israel, Ahab.  She too had her own battles from her upbringing of terrible role models from her parents, Ahab and Jezebel.  She would be just as evil as them.  Without thinking, Jehoshaphat would make a decision that almost killed him.  He got into a crazy shipbuilding business with Ahab’s son that would bring disaster.

Here’s the point:  It’s not just the big things God wants to be part of in our lives.  He wants and needs to involved in our day to day activities as well.  Sometimes we take God out of the equation with the easier decisions we think we have.  Instead, we only go to Him with the large decisions.  This is a recipe for disaster.  For God wants to be part of all aspects of our lives and choices.  From the small to the great, He wants to be involved.

What say you?  Are you bringing all choices and decisions before Him?  Are you seeking Him on the small and the great?

Leadership has a trickle-down effect. Judah or Israel had not seen a king like Jehoshaphat since David. In fact, many scholars say that Jehoshaphat approached the wealth and status of King Solomon but had the reform of King David. The point being, others flourished in their walk.

Because he removed the idols from the land, the people were taught a consistent message from the Word. The King actually sent out the Levite priests to teach the people. This resulted in the entire nation being drawn toward God. Other kingdoms feared Judah.

9 They took the book of the Law of the LORD and went through all the towns of Judah, teaching it to the people. 10 The LORD made all the surrounding kingdoms afraid to go to war against King Jehoshaphat.

It’s interesting to consider…what would those “kingdoms” look like in our life? Obviously, if our government commissioned great pastors to go around America and preach God’s Word, we would see great reform. However, I’m thinking more personally. What would change in your extended family if you began to lead toward God? Who would change? How would your neighborhood look different if you served like Jesus? How would your workplace change if you made it a point to lead like Jehoshaphat did?