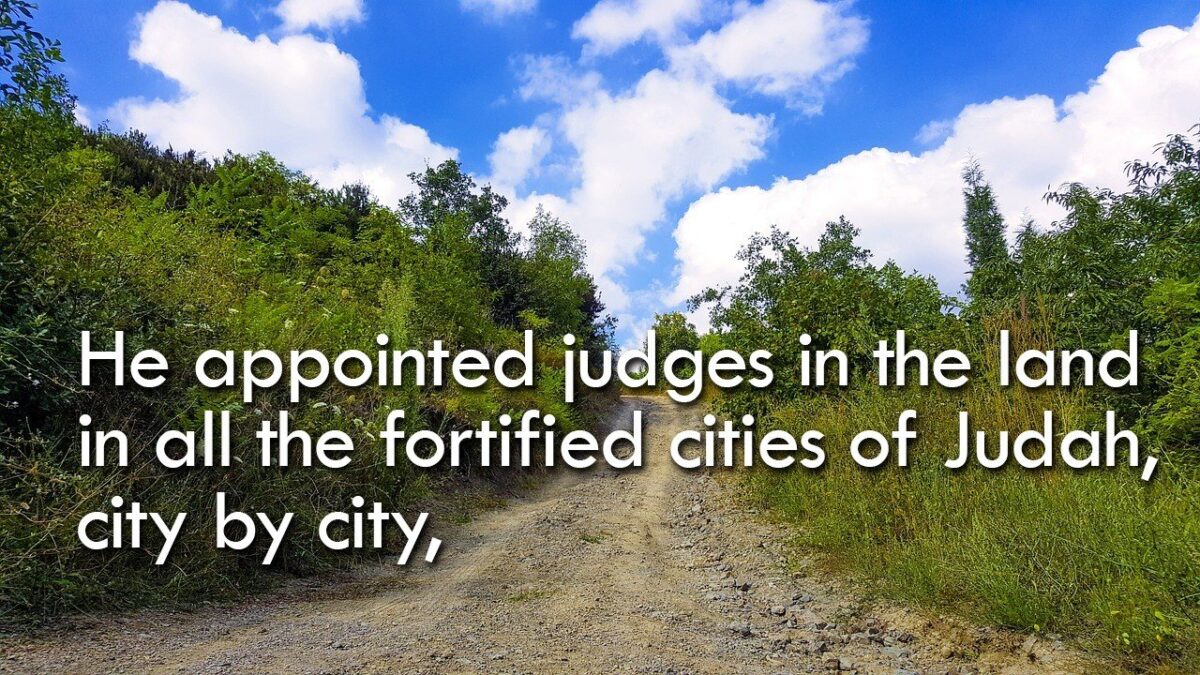 19 Jehoshaphat the king of Judah returned in safety to his house in Jerusalem. But Jehu the son of Hanani the seer went out to meet him and said to King Jehoshaphat, “Should you help the wicked and love those who hate the LORD? Because of this, wrath has gone out against you from the LORD. Nevertheless, some good is found in you, for you destroyed the Asheroth out of the land, and have set your heart to seek God.”

Jehoshaphat lived at Jerusalem. And he went out again among the people, from Beersheba to the hill country of Ephraim, and brought them back to the LORD, the God of their fathers. He appointed judges in the land in all the fortified cities of Judah, city by city, and said to the judges, “Consider what you do, for you judge not for man but for the LORD. He is with you in giving judgment. Now then, let the fear of the LORD be upon you. Be careful what you do, for there is no injustice with the LORD our God, or partiality or taking bribes.”

Moreover, in Jerusalem Jehoshaphat appointed certain Levites and priests and heads of families of Israel, to give judgment for the LORD and to decide disputed cases. They had their seat at Jerusalem. And he charged them: “Thus you shall do in the fear of the LORD, in faithfulness, and with your whole heart: whenever a case comes to you from your brothers who live in their cities, concerning bloodshed, law or commandment, statutes or rules, then you shall warn them, that they may not incur guilt before the LORD and wrath may not come upon you and your brothers. Thus you shall do, and you will not incur guilt. And behold, Amariah the chief priest is over you in all matters of the LORD; and Zebadiah the son of Ishmael, the governor of the house of Judah, in all the king’s matters, and the Levites will serve you as officers. Deal courageously, and may the LORD be with the upright!”

Have you ever gotten through something by the skin of your teeth?  What a strange phrase right?  Believe it or not, it is first mentioned in the book of Job!  It is the concept you barely survived or escaped a situation.

There are times we put ourselves in such dire situations.  We foolishly make decisions with far-reaching ramifications and only by the grace of God are we able to walk away.  We survived but barely.  And well, we learn a thing or two as well.

To recap:  Jehoshaphat went and joined forces with wicked king Ahab.  As the previous chapter spoke, they were bamboozled by 400 false prophets who said they would be victorious in their quest of war.  Enter Micaiah, the only prophet who spoke up with a word of the Lord as to the truth of the matter.  They should all pack up and go home.  Against this word, both kings decided to go forward with their intentions.

Compounding to the event, weakling Ahab decided to dress Jehoshaphat in royalty so the opposing warriors would think he was him.  Ahab disguised himself.  As the warriors pressed in to kill Jehoshaphat thinking he was the king of Israel, he cried out to God and he delivered him as the commanders realized he was not Ahab and stopped their pursuit.  It would be a random arrow shot that actually killed Ahab, putting his evil reign to a bloody end.

Jehoshaphat escaped this foolish decision, going against the word of the Lord given by Micaiah by the skin of his teeth.

All good, right?  Not completely.  God wanted him to realize how it was only His mercy that saved him.  Returning safely home, a feat in itself as his disobedience sat the table for his demise.  But God who is rich in mercy extended such grace and allowed him to live, but not without warning.  Jehu, a seer and son of a brave prophet Hanani who spoke to Asa was led to confront him.  The rebuke is swift.

But God also brought encouragement.  Yes, he was called out but there could more to the story if he went back to pursuing Him.  What would follow was some further reforms and delegating so people would be on track.

The grace of God spared Jehoshaphat and it also confronted him.  Because He loved him he was challenged.  But that grace also gave hope if he changed.

We’ve each been there.  We’ve made stupid decisions that have cost us.  We’ve foolishly followed our own wants and needs rather than being in tune with God’s will.  The reality is God’s grace still comes even in those moments.  We may have survived by the skin of our teeth, but our God who is so rich in mercy wants to see us go forward.  For some of us, He’s waiting on just that.

Jehoshaphat was a spiritual leader. Other than David or Solomon, he restored the nation to a deeper spiritual commitment than any king of Judah or Israel. One of his strategies in doing this was to position judges through every fortified city in Judah.

He appointed judges in the land in all the fortified cities of Judah, city by city, 6 and said to the judges, “Consider what you do, for you judge not for man but for the LORD. He is with you in giving judgment.

Their responsibilities were as follows:

If a matter could not be settled by a judge, then it would go to the high court in Jerusalem where the Levites, priests, and chief fathers would settle it. The important thing to remember is that the king trusted these individuals to carry out the qualities of God among the people. Likewise, Jesus has done the same with us. We are representations of Him.

It’s strange how sometimes people will represent Jesus really well in person but show a completely different side over social media or texting. If these judges would have decided to act recklessly or out of their own emotions, it would have hurt their authority and their example. Likewise, when we are inconsistent with Jesus’ message in different areas of our life, we will hurt our witness. If we act just like the world, what difference does it make for a nonbeliever who has been searching?