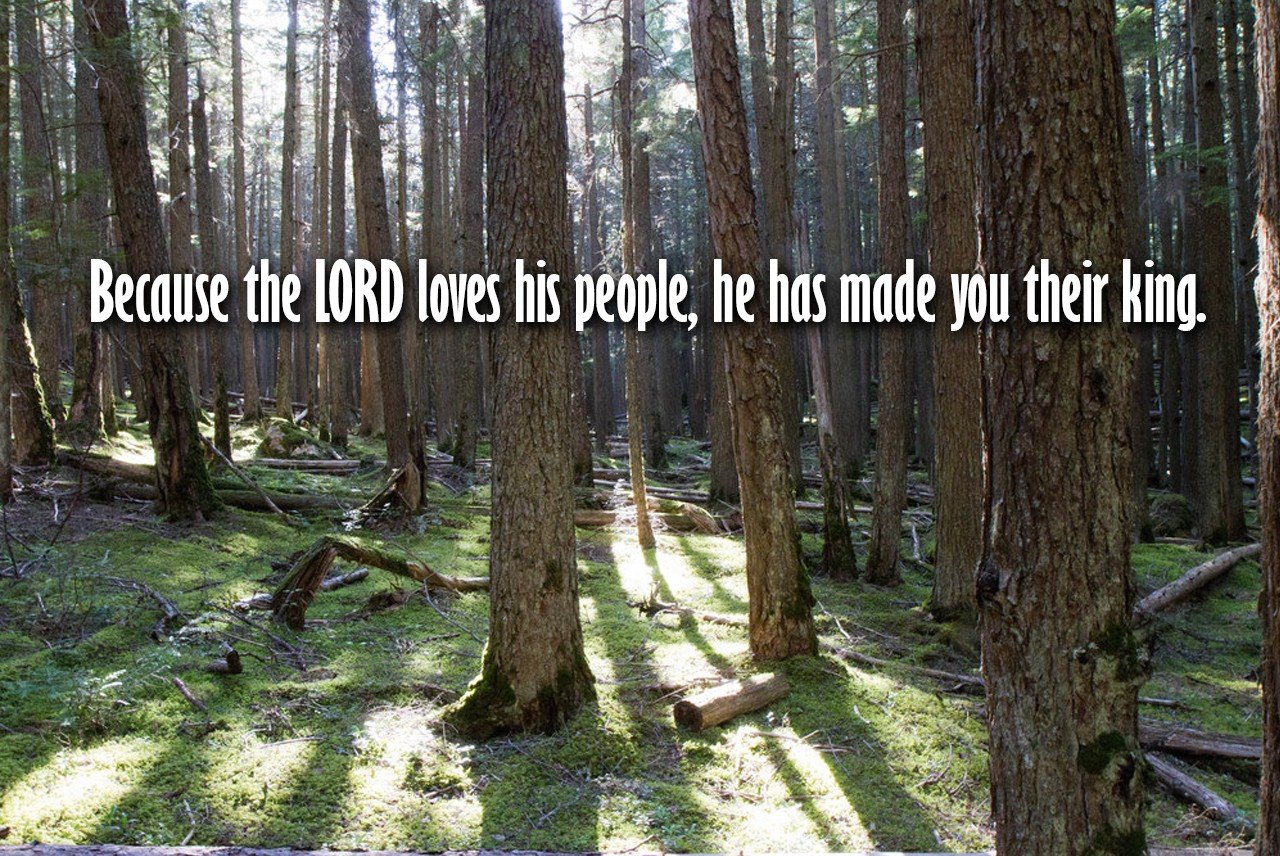 Preparing to Build the Temple

2 Now Solomon purposed to build a temple for the name of the LORD, and a royal palace for himself. And Solomon assigned 70,000 men to bear burdens and 80,000 to quarry in the hill country, and 3,600 to oversee them. And Solomon sent word to Hiram the king of Tyre: “As you dealt with David my father and sent him cedar to build himself a house to dwell in, so deal with me. Behold, I am about to build a house for the name of the LORD my God and dedicate it to him for the burning of incense of sweet spices before him, and for the regular arrangement of the showbread, and for burnt offerings morning and evening, on the Sabbaths and the new moons and the appointed feasts of the LORD our God, as ordained forever for Israel. The house that I am to build will be great, for our God is greater than all gods. But who is able to build him a house, since heaven, even highest heaven, cannot contain him? Who am I to build a house for him, except as a place to make offerings before him? So now send me a man skilled to work in gold, silver, bronze, and iron, and in purple, crimson, and blue fabrics, trained also in engraving, to be with the skilled workers who are with me in Judah and Jerusalem, whom David my father provided. Send me also cedar, cypress, and algum timber from Lebanon, for I know that your servants know how to cut timber in Lebanon. And my servants will be with your servants, to prepare timber for me in abundance, for the house I am to build will be great and wonderful. I will give for your servants, the woodsmen who cut timber, 20,000 cors of crushed wheat, 20,000 cors of barley, 20,000 baths of wine, and 20,000 baths of oil.”

Then Hiram the king of Tyre answered in a letter that he sent to Solomon, “Because the LORD loves his people, he has made you king over them.” Hiram also said, “Blessed be the LORD God of Israel, who made heaven and earth, who has given King David a wise son, who has discretion and understanding, who will build a temple for the LORD and a royal palace for himself.

“Now I have sent a skilled man, who has understanding, Huram-abi, the son of a woman of the daughters of Dan, and his father was a man of Tyre. He is trained to work in gold, silver, bronze, iron, stone, and wood, and in purple, blue, and crimson fabrics and fine linen, and to do all sorts of engraving and execute any design that may be assigned him, with your craftsmen, the craftsmen of my lord, David your father. Now therefore the wheat and barley, oil and wine, of which my lord has spoken, let him send to his servants. And we will cut whatever timber you need from Lebanon and bring it to you in rafts by sea to Joppa, so that you may take it up to Jerusalem.”

Then Solomon counted all the resident aliens who were in the land of Israel, after the census of them that David his father had taken, and there were found 153,600. Seventy thousand of them he assigned to bear burdens, 80,000 to quarry in the hill country, and 3,600 as overseers to make the people work.

Sometimes we get so caught up in the here and now we neglect to have foresight toward end results beyond our lifetime.  Meaning, we are all laying the groundwork for future generations through our own life of obedience.

My father was born into a pagan family.  His mother a German immigrant who landed in New York by boat eventually found herself in Indiana.  My grandfather was a rascal of a man, who after fathering 5 kids, left her for the city of Chicago where he would work for the mafia, eventually killed Dutch Shultz and many others and would die in prison in New Jersey.  My dad never knew his father.

During World War 2 while on leave he met my mother by chance.  When he returned to the war front, they corresponded, and when his time in the navy was over, he came home and married her.  Both were as far from being Believers as anyone.  But Jesus showed up.  The Holy Spirit began tinkering with their thoughts which eventually led them to a Billy Graham crusade where they went forward accepting Jesus as Savior.  Both parents drove a stake in the ground and committed to serving Jesus even at the cost of losing friends and some family.  But they remained faithful and today all of us kids, grandkids and even great-grandchildren are Believers.

The Holy Spirit working in my parents life, their consequence obedience on all matters, laid the groundwork for generations of faith.  Yes, it’s a great story of which I’m so thankful for.  But the reality is you are laying a work for your children, grandchildren and beyond.  What are they picking up?  What will they gather from your own obedience or lack thereof that draws them toward their calling?

David’s great desire was to build a temple to God.  When the answer came back he was not going to have that privilege.  His son Solomon would instead.  But David was permitted to make plans and prepare things for his son to take over.  He purchased the land, actually gathered building materials and God gave him the plans for Solomon to execute.  When Solomon took the throne many things were set in place for him to fulfill this desire.  David set the table and Solomon pulled up his seat.

What you are doing today is affecting the future.  This is an absolutely true statement with great magnitude of how you live your life.  As David stayed the course toward the end of his reign in preparing things for those to follow, so are we.  Don’t lose sight of the fact, your obedience today brings transformation tomorrow in many others lives.

Solomon knew the dwelling place for God would not do Him justice. He makes this statement in verse 6…

Yet no one can really build a temple for God, because even all the vastness of heaven cannot contain him. How then can I build a temple that would be anything more than a place to burn incense to God?

Even though he knew he could not create anything greater than God, he spared no expense. Solomon built the temple with the finest cedar and the most skilled craftsmen. In fact, he issues a command to find for him the most skilled in the land. What king of materials were used?

Purple, crimson, and blue fabrics were considered unique, expensive, and highly desirable. Most likely the blue was closer shade of purple and the dye would have been imported into Israel. The dye itself was extracted from the murex snail (a creature in the Mediterranean) and one chemist has estimated that 250,000 snails would be needed to produce just 1 oz. of dye!

Solomon required only the finest lumber for this project. Cedar, cypress, and possibly red sandalwood were all considered luxurious hardwoods that appealed to all the senses. Visually they would polish up with a fine grain and the aroma from this lumber is still a popular fragrance that is used today. The other materials used included gold, silver, and cut stones. The artistic design included carvings of trees, garlands, and cherubim.

The temple was not a proud accomplishment of Solomon, but a fulfillment of God’s covenant. This is an important point. God deserved the credit. It was He who had provided all the resources and people throughout the years. It was He who was behind all the victories of David. And, it would be God who allowed the temple to finally be constructed and enjoyed by all.

God’s Temple Through The Years

In Revelation 15, John feasts his eyes on the (original) tent of testimony in heaven. This idea would be brought to earth in many different ways over the years. The first would be the tabernacle of the Old Testament which needed to be mobile so that the Israelites could take it with them through the wilderness. This is where the presence of God would dwell among them. But as we are finding out here in Chronicles, the time had come for Solomon to build a permanent structure.

The incredible temple Solomon is building would house the presence of God and the tabernacle could be officially retired. However, the presence of God and the continual sacrificing of animals was not enough to deter His people from their spiritual adultery. So, ultimately, God decided to dwell among us in person. Jesus Christ made His way to earth and humanity was able to witness for ourselves God’s presence among us.

But once again, humanity did not want to commune with God. After Jesus’ death and resurrection, He left us with the Holy Spirit who He promised would take up residence within the hearts of believers. Our bodies are now the temple of God which house His presence and allow us to commune intimately with Him.

We are the hands and feet of Jesus.