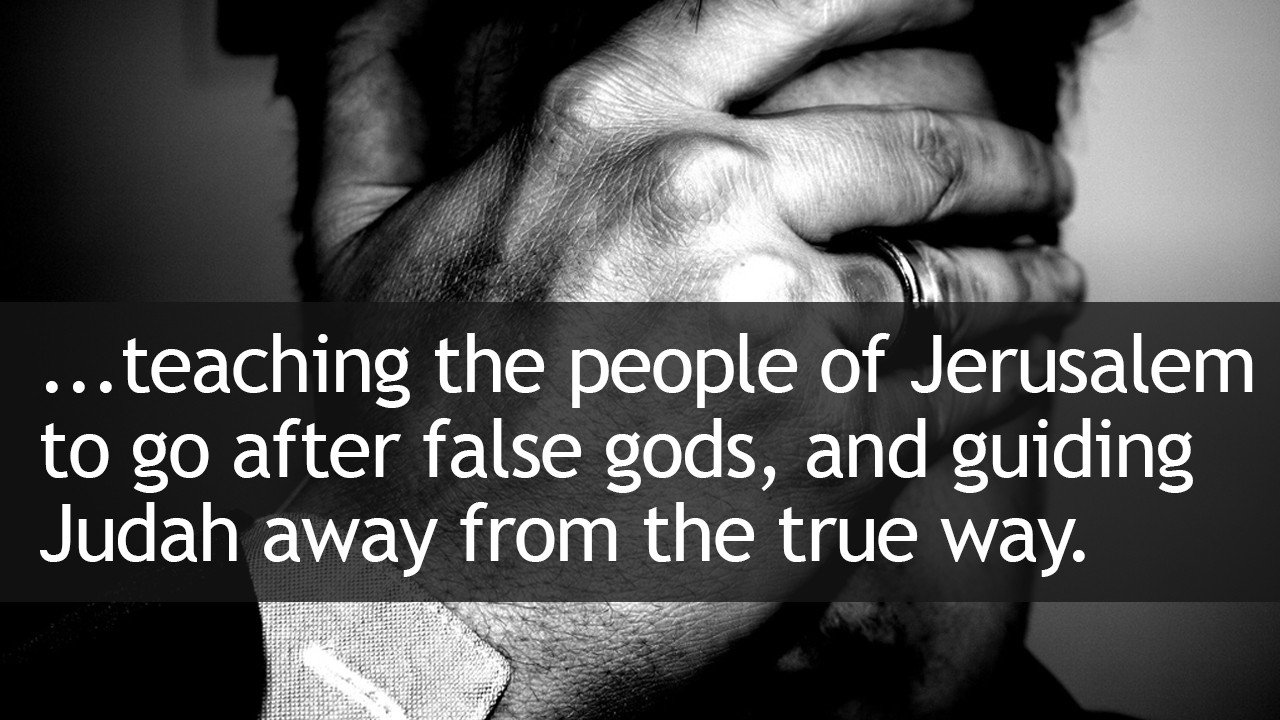 21 Jehoshaphat slept with his fathers and was buried with his fathers in the city of David, and Jehoram his son reigned in his place. He had brothers, the sons of Jehoshaphat: Azariah, Jehiel, Zechariah, Azariah, Michael, and Shephatiah; all these were the sons of Jehoshaphat king of Israel. Their father gave them great gifts of silver, gold, and valuable possessions, together with fortified cities in Judah, but he gave the kingdom to Jehoram, because he was the firstborn. When Jehoram had ascended the throne of his father and was established, he killed all his brothers with the sword, and also some of the princes of Israel. Jehoram was thirty-two years old when he became king, and he reigned eight years in Jerusalem. And he walked in the way of the kings of Israel, as the house of Ahab had done, for the daughter of Ahab was his wife. And he did what was evil in the sight of the LORD. Yet the LORD was not willing to destroy the house of David, because of the covenant that he had made with David, and since he had promised to give a lamp to him and to his sons forever.

Moreover, he made high places in the hill country of Judah and led the inhabitants of Jerusalem into whoredom and made Judah go astray. And a letter came to him from Elijah the prophet, saying, “Thus says the LORD, the God of David your father, ‘Because you have not walked in the ways of Jehoshaphat your father, or in the ways of Asa king of Judah, but have walked in the way of the kings of Israel and have enticed Judah and the inhabitants of Jerusalem into whoredom, as the house of Ahab led Israel into whoredom, and also you have killed your brothers, of your father’s house, who were better than you, behold, the LORD will bring a great plague on your people, your children, your wives, and all your possessions, and you yourself will have a severe sickness with a disease of your bowels, until your bowels come out because of the disease, day by day.’”

And the LORD stirred up against Jehoram the anger of the Philistines and of the Arabians who are near the Ethiopians. And they came up against Judah and invaded it and carried away all the possessions they found that belonged to the king’s house, and also his sons and his wives, so that no son was left to him except Jehoahaz, his youngest son.

And after all this the LORD struck him in his bowels with an incurable disease. In the course of time, at the end of two years, his bowels came out because of the disease, and he died in great agony. His people made no fire in his honor, like the fires made for his fathers. He was thirty-two years old when he began to reign, and he reigned eight years in Jerusalem. And he departed with no one’s regret. They buried him in the city of David, but not in the tombs of the kings.

Time reveals the fruit of our lives.  Many times seasons must come and go before the bearing of our own obedience or choices is shown.  Sometimes that revelation is not the best.

It would not be until after Jehoshaphat was dead that the long-lasting effects of his walk and trust in God would bear fruit.  This king pursued God on many different levels.  We’ve actually been inspired by some of these stories.  But he also made decisions that were long lasting.  Compromising choices which brought outcomes he never dreamed or would see in his lifetime.  One of which was his willingness to bring pagan kings daughters into his household for political alliance purposes.

It would be his son Jehoram who took the throne after his father’s passing that would mark him as an evil king.  He had been given the daughter of Ahab and Jezebel, Athaliah in an alliance.  This woman was much like her mother who was known for her control and cruelty. Because she was a pagan, commentators believe her influence is what led him to act in ways not of God.  One of the first things he did was kill all his brothers so they would not be a threat to his rule.

He built high places for worship to false gods leading Judah to prostitute themselves.  In time God’s judgment on this man would come in a horrific death.  In fact, when he would not be honored by the standards of a king’s death as the land was relieved to see him gone.

I had a conversation recently where a man spoke of his legacy.  The Holy Spirit has been working in his life as he’s become more aware of what he’s sowing into the lives of his children concerning his faith and love of Jesus.  It was a beautiful dialogue where he is looking beyond the moment toward things of even after he’s gone from this world.  His desire is to leave a legacy with his children that goes to future grandchildren and great-grandchildren of whom he will never know or meet in this lifetime.

Decisions today affect tomorrow.  Modeling a love and consistency on all levels are the framework for those who follow behind.  In spiritual matters this is critical.

There is a simple question with a simple answer. What’s the cost? When you look at the way you are living your life, what is it costing you?

For Jehoram, the life he chose to live cost him a lot. Herein lies the problem with life, in general. The truth is, we will pay regardless. You will experience trouble in this life… it’s guaranteed. All of us will suffer and all of us will die one day. Yes, it’s a bit discouraging, but it’s reality. So, we must first understand that trouble is inevitable regardless of our decisions and behavior. The problem with Jehoram was that his nearsighted lifestyle intensified his suffering and loss. He lacked wisdom. Let’s review…

That’s a pretty high cost for the type of lifestyle he decided to live. I would imagine that when he got to the end, Jehoram realized just how much of his life he had wasted. It’s a tragedy because most people do not realize this truth until it is too late.

Even worse than this list of worldly consequences are the eternal ramifications of our rebellion against God. All of us are prone to nearsightedness. Just like we love fast food and on-demand movies, our natural desires will always take instant gratification over patient progress.

God asks us to place our faith in His Son, His Kingdom, and His timing. He asks us to trust with obedience even when it seems completely unnatural. He asks us to give over our entire lives for His sake. He implores us to patiently endure. Yes, there will always be struggles, but for those who endure by faithfully trusting in Jesus, glory awaits!