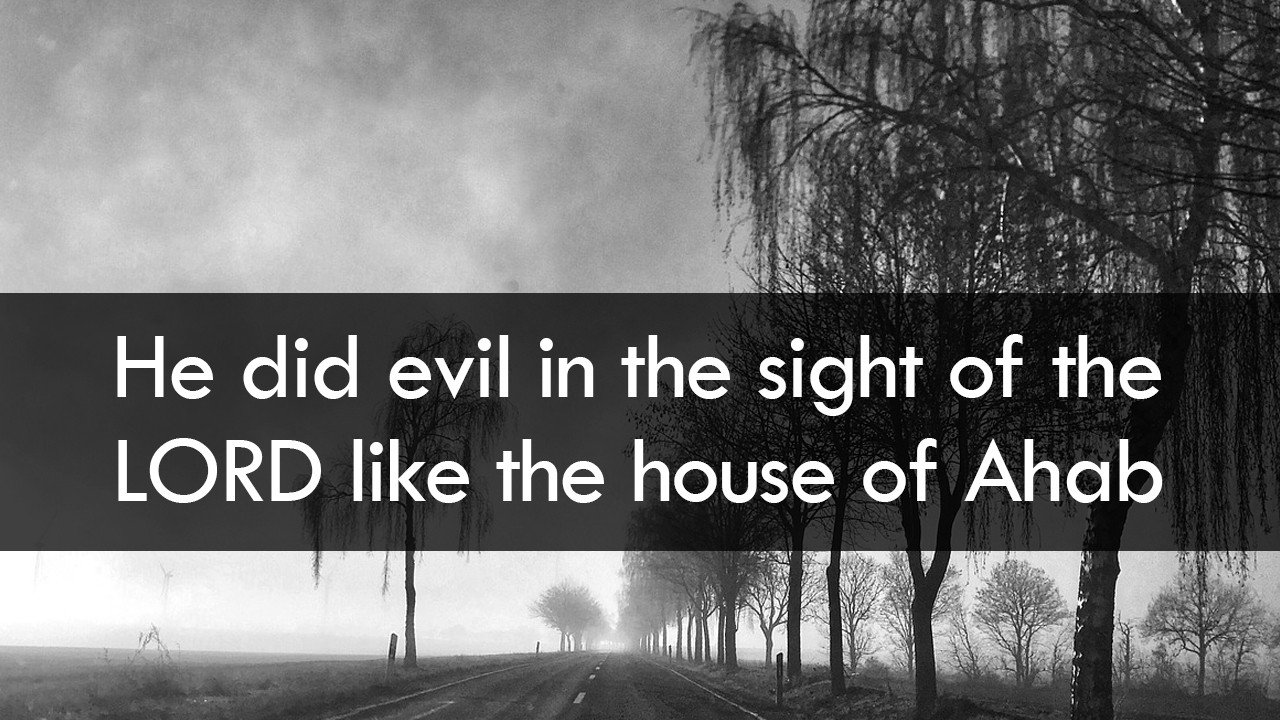 22 And the inhabitants of Jerusalem made Ahaziah, his youngest son, king in his place, for the band of men that came with the Arabians to the camp had killed all the older sons. So Ahaziah the son of Jehoram king of Judah reigned. Ahaziah was twenty-two years old when he began to reign, and he reigned one year in Jerusalem. His mother’s name was Athaliah, the granddaughter of Omri. He also walked in the ways of the house of Ahab, for his mother was his counselor in doing wickedly. He did what was evil in the sight of the LORD, as the house of Ahab had done. For after the death of his father they were his counselors, to his undoing. He even followed their counsel and went with Jehoram the son of Ahab king of Israel to make war against Hazael king of Syria at Ramoth-gilead. And the Syrians wounded Joram, and he returned to be healed in Jezreel of the wounds that he had received at Ramah, when he fought against Hazael king of Syria. And Ahaziah the son of Jehoram king of Judah went down to see Joram the son of Ahab in Jezreel, because he was wounded.

But it was ordained by God that the downfall of Ahaziah should come about through his going to visit Joram. For when he came there, he went out with Jehoram to meet Jehu the son of Nimshi, whom the LORD had anointed to destroy the house of Ahab. And when Jehu was executing judgment on the house of Ahab, he met the princes of Judah and the sons of Ahaziah’s brothers, who attended Ahaziah, and he killed them. He searched for Ahaziah, and he was captured while hiding in Samaria, and he was brought to Jehu and put to death. They buried him, for they said, “He is the grandson of Jehoshaphat, who sought the LORD with all his heart.” And the house of Ahaziah had no one able to rule the kingdom.

Now when Athaliah the mother of Ahaziah saw that her son was dead, she arose and destroyed all the royal family of the house of Judah. But Jehoshabeath, the daughter of the king, took Joash the son of Ahaziah and stole him away from among the king’s sons who were about to be put to death, and she put him and his nurse in a bedroom. Thus Jehoshabeath, the daughter of King Jehoram and wife of Jehoiada the priest, because she was a sister of Ahaziah, hid him from Athaliah, so that she did not put him to death. And he remained with them six years, hidden in the house of God, while Athaliah reigned over the land.

Who speaks into your life? Who is it that you turn to for advice and counsel?  Are there those who you look toward that may not have the best interest of God in what they say?

Ahaziah reigned 1 year until he was killed.  What stood out to me is a simple statement:

…after his father’s death they became his advisers, to his undoing.”

The ‘they’ in this statement refers to his mother, who was Athaliah and also references the house of Ahab.  Remember, she was the daughter of Ahab and Jezebel.  These 2 were absolutely evil on every level who had reigned in the Northern Kingdom.  Athaliah made her own wishes known to her son directing him toward decisions and even encouraging him to pursue false gods.  Let’s remember, Judah was the house of David.  What took place through this entire upended leadership was in effect, Ahab’s dynasty took control of the throne on the seat of David.  Much was at stake through this chaotic time.

The advice given to each of us if not true and pure can lead to our own undoing if we accept it.  This is why we must be so mindful of who we allow to speak into our lives and whose words we decide to take.

Look, we know people by their fruit.  There are those in all of our circles of friends, churches who skew toward negative.  Oozing from the very words they use, the outlook they have, this affects us.  Run.  Run as far as you possibly can from such.  For this in effect guides our own outlook at times if we allow them a place at the table of our friends and advisers.

The fruit of others lives is a skewed aspect of God Himself.  There are well-meaning people who have read too much of man’s thought for their own good.  They incorporate these into their own theology that is not based upon God’s Word.  Run.  Run as far as you possibly can.  This list of examples could go on and on.  The point is, who are you allowing to speak into your life?  Look at their fruit and weigh in if their lives reflect a godly way of responding or if they lean more toward reason and lack of faith.

For Ahaziah, his advisers led him to ruin.  The same could happen to us if we are not careful.

Rejoice always, 17 pray without ceasing, 18 give thanks in all circumstances; for this is the will of God in Christ Jesus for you. 19 Do not quench the Spirit. 20 Do not despise prophecies, 21 but test everything; hold fast what is good. 22 Abstain from every form of evil.

The family tree of Jehoshaphat and Ahab can get overwhelming. If you are reading and getting confused, there is a great family tree of this chapter at the link below.

The root of the issue lies with the decision to allow Jehoram (Jehoshaphat’s son of Judah) to marry Athaliah (Ahab / Jezebel’s daughter of Israel). Jehoshaphat had tried his best to establish a Godly kingdom and Ahab had done just the opposite. Judah was moving toward God and Israel was moving far away.

So as you can see, this decision was more than just a marriage. It was an alliance between a faithful king and an unfaithful king. It was ultimately the joining of two very different nations. There was a reason God forbid His people to intermarry with pagan religions. The results almost always came out the same.

This is exactly what happened.

The house of Ahab eventually poisened David’s kingdom within Judah. What may have seemed good on the surface would lead to generations of sinful rebellion. Not only would this affect the leaders but also the people who were being led. The moral of the story is to remember that our choices today may influence generations to come… some of which we will never know.