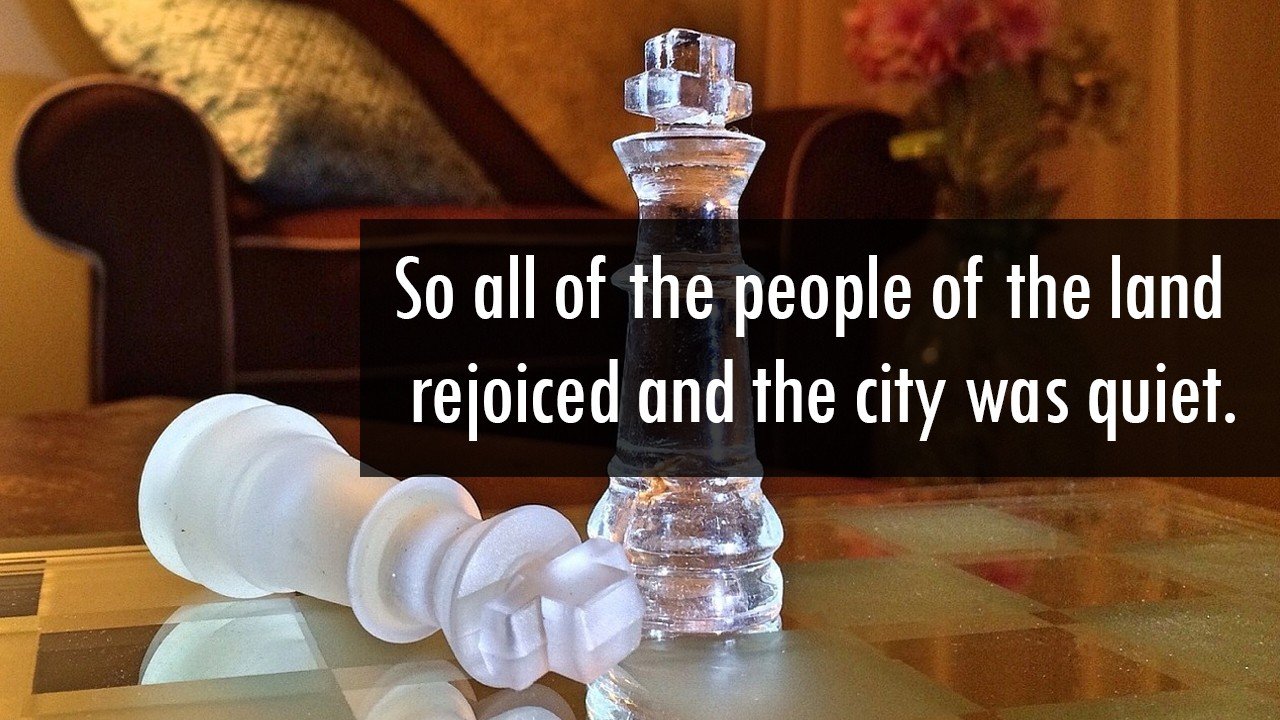 23 But in the seventh year Jehoiada took courage and entered into a covenant with the commanders of hundreds, Azariah the son of Jeroham, Ishmael the son of Jehohanan, Azariah the son of Obed, Maaseiah the son of Adaiah, and Elishaphat the son of Zichri. And they went about through Judah and gathered the Levites from all the cities of Judah, and the heads of fathers’ houses of Israel, and they came to Jerusalem. And all the assembly made a covenant with the king in the house of God. And Jehoiada said to them, “Behold, the king’s son! Let him reign, as the LORD spoke concerning the sons of David. This is the thing that you shall do: of you priests and Levites who come off duty on the Sabbath, one third shall be gatekeepers, and one third shall be at the king’s house and one third at the Gate of the Foundation. And all the people shall be in the courts of the house of the LORD. Let no one enter the house of the LORD except the priests and ministering Levites. They may enter, for they are holy, but all the people shall keep the charge of the LORD. The Levites shall surround the king, each with his weapons in his hand. And whoever enters the house shall be put to death. Be with the king when he comes in and when he goes out.”

The Levites and all Judah did according to all that Jehoiada the priest commanded, and they each brought his men, who were to go off duty on the Sabbath, with those who were to come on duty on the Sabbath, for Jehoiada the priest did not dismiss the divisions. And Jehoiada the priest gave to the captains the spears and the large and small shields that had been King David’s, which were in the house of God. And he set all the people as a guard for the king, every man with his weapon in his hand, from the south side of the house to the north side of the house, around the altar and the house. Then they brought out the king’s son and put the crown on him and gave him the testimony. And they proclaimed him king, and Jehoiada and his sons anointed him, and they said, “Long live the king.”

When Athaliah heard the noise of the people running and praising the king, she went into the house of the LORD to the people. And when she looked, there was the king standing by his pillar at the entrance, and the captains and the trumpeters beside the king, and all the people of the land rejoicing and blowing trumpets, and the singers with their musical instruments leading in the celebration. And Athaliah tore her clothes and cried, “Treason! Treason!” Then Jehoiada the priest brought out the captains who were set over the army, saying to them, “Bring her out between the ranks, and anyone who follows her is to be put to death with the sword.” For the priest said, “Do not put her to death in the house of the LORD.” So they laid hands on her, and she went into the entrance of the horse gate of the king’s house, and they put her to death there.

When all hope is gone there is still a plan.  Do you believe that?  Do you trust that statement?  Where do you need to be reminded even right at this moment of such truth?

This is a great story!

Athaliah took the throne after her son was killed.  Evil to the core, she was a corrupt woman much like her mother Jezebel.  She flagrantly had pagan worship practiced and killed all the heirs to the throne… or so she thought.  For 6  years she led the nation.  Unbeknownst to her, one child was spared by the Hand of God through a nurse.  Joash was taken and hidden all that time in the temple.  Ironic really because he was right under her nose but she who was pagan would have never gone into the temple of God!

Hope for the people was lost.  From their perspective, there was no alternative to her rule or son of David who could take his place.  Her atrocities bombarded the people again and again throughout those 6 years.  But God was working a miraculous plan.  In the seventh year of her reign, God moved first within Jehoiada the priest who gained courage and took action.  David’s heir was brought out of hiding.  This must have been that mouth to the floor moment for all who witnessed it thinking no one was left.

Rallying the priests, the Levites and soldiers to guard this young one and in a flash, Joash was crowned king right there in the temple.  The ruckus filled the air with shouts of joy, trumpets, and singers.  The gig being up finally, Athaliah met her demise much like her mother’s who was immediately killed.  The people had their hope back and stormed the temple of Baal tearing it down, smashed the altar and struck down the priest of that pagan worship as well.

When God had all the right pieces in place, He moved.  He responded in a dramatic way that was shocking to the people but also did something within them as well.  They finally had hope that the tyranny of evil was over.

So, back to the initial questions.  Do you believe God has a plan even though it is so dark for you at the moment?  Do you believe He can work a miracle beyond anything seen or reasonable even?  The people were lost for 6 years in hopelessness but behind the scenes, God was working.  He’s doing the same now in your situation.  Trust Him.  Don’t give up hope.  Stay the course.  God is in control even if it doesn’t look like it at the moment.  When He moves it will be a mouth-to-the-floor moment where a stunning act of God will bring praise and joy like you never imagined.

The drama surrounding this messianic promise is an interesting story. The offspring of David’s line had officially been reduced to one man – Joash. Had he died, or been killed, there would be no heir through the Davidic dynasty to crown king. Furthermore, all the prophecies that predicted the Messiah coming from this dynasty would be shattered.

So many times, life happens this way. We can’t see a path. With a conniving, power-hungry ruler like Athaliah in control, it seemed hopeless. But this was not simply an overthrowing of power. It wasn’t a riot or a rebellion. It was holy provision. God willed to put His lineage back into leadership. So, it happened…just like that.

What’s so crazy about this is we tend to doubt that God will do any of this when we can’t see a path. If it’s not humanly logical, we tend to write it off. Yes, we may hope for it, but it seems so far away. For us today we must remember that God’s will always prevails. He can stir the right people at just the right timing in order to accomplish His plans.

Where do you need to hear this today? Where have you lost sight of His promises?

I feel we have our nation of America, we indeed are right there in this glorious story. God does have a plan and we must seek Him and yes…be brave just as the priest was.. God has a plan. This is our hope! I BELIEVE it!!! Thank you men for bringing these scriptures to us and love the commentaries