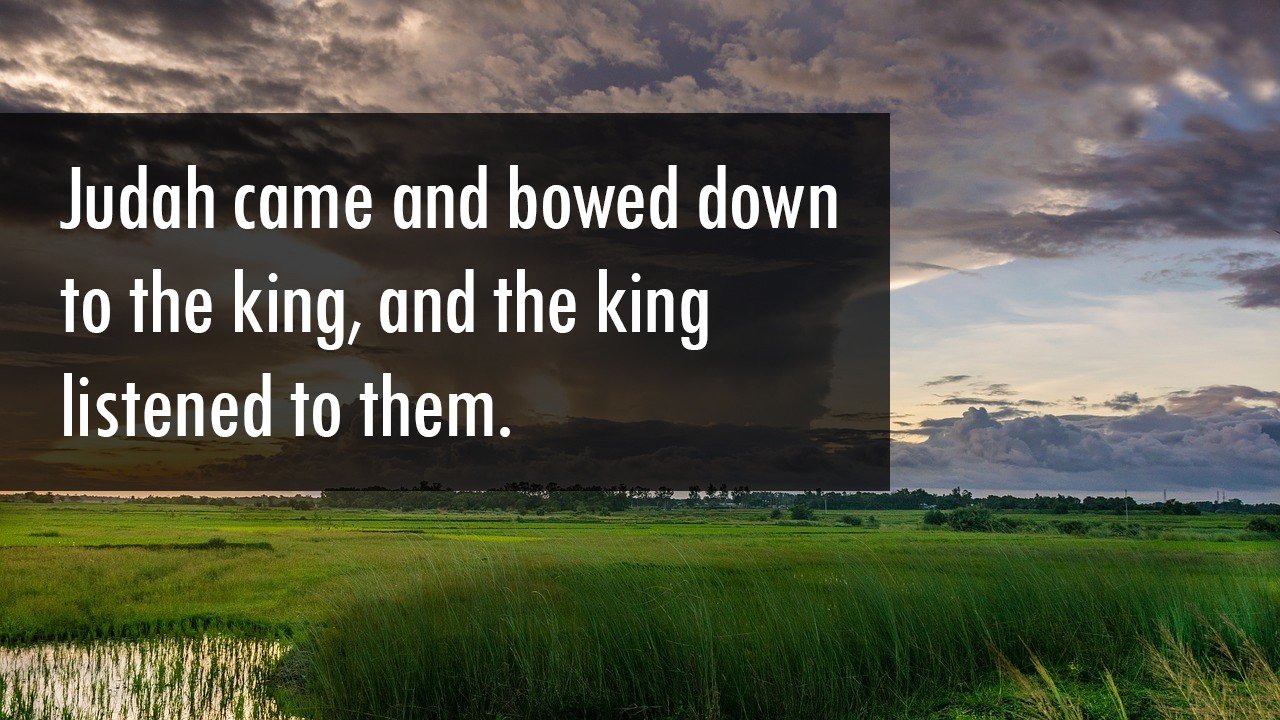 24 Joash was seven years old when he began to reign, and he reigned forty years in Jerusalem. His mother’s name was Zibiah of Beersheba. And Joash did what was right in the eyes of the LORD all the days of Jehoiada the priest. Jehoiada got for him two wives, and he had sons and daughters.

After this Joash decided to restore the house of the LORD. And he gathered the priests and the Levites and said to them, “Go out to the cities of Judah and gather from all Israel money to repair the house of your God from year to year, and see that you act quickly.” But the Levites did not act quickly. So the king summoned Jehoiada the chief and said to him, “Why have you not required the Levites to bring in from Judah and Jerusalem the tax levied by Moses, the servant of the LORD, and the congregation of Israel for the tent of testimony?” For the sons of Athaliah, that wicked woman, had broken into the house of God, and had also used all the dedicated things of the house of the LORD for the Baals.

So the king commanded, and they made a chest and set it outside the gate of the house of the LORD. And proclamation was made throughout Judah and Jerusalem to bring in for the LORD the tax that Moses the servant of God laid on Israel in the wilderness. And all the princes and all the people rejoiced and brought their tax and dropped it into the chest until they had finished. And whenever the chest was brought to the king’s officers by the Levites, when they saw that there was much money in it, the king’s secretary and the officer of the chief priest would come and empty the chest and take it and return it to its place. Thus they did day after day, and collected money in abundance. And the king and Jehoiada gave it to those who had charge of the work of the house of the LORD, and they hired masons and carpenters to restore the house of the LORD, and also workers in iron and bronze to repair the house of the LORD. So those who were engaged in the work labored, and the repairing went forward in their hands, and they restored the house of God to its proper condition and strengthened it. And when they had finished, they brought the rest of the money before the king and Jehoiada, and with it were made utensils for the house of the LORD, both for the service and for the burnt offerings, and dishes for incense and vessels of gold and silver. And they offered burnt offerings in the house of the LORD regularly all the days of Jehoiada.

But Jehoiada grew old and full of days, and died. He was 130 years old at his death. And they buried him in the city of David among the kings, because he had done good in Israel, and toward God and his house.

Now after the death of Jehoiada the princes of Judah came and paid homage to the king. Then the king listened to them. And they abandoned the house of the LORD, the God of their fathers, and served the Asherim and the idols. And wrath came upon Judah and Jerusalem for this guilt of theirs. Yet he sent prophets among them to bring them back to the LORD. These testified against them, but they would not pay attention.

Then the Spirit of God clothed Zechariah the son of Jehoiada the priest, and he stood above the people, and said to them, “Thus says God, ‘Why do you break the commandments of the LORD, so that you cannot prosper? Because you have forsaken the LORD, he has forsaken you.’” But they conspired against him, and by command of the king they stoned him with stones in the court of the house of the LORD. Thus Joash the king did not remember the kindness that Jehoiada, Zechariah’s father, had shown him, but killed his son. And when he was dying, he said, “May the LORD see and avenge!”

At the end of the year the army of the Syrians came up against Joash. They came to Judah and Jerusalem and destroyed all the princes of the people from among the people and sent all their spoil to the king of Damascus. Though the army of the Syrians had come with few men, the LORD delivered into their hand a very great army, because Judah had forsaken the LORD, the God of their fathers. Thus they executed judgment on Joash.

When they had departed from him, leaving him severely wounded, his servants conspired against him because of the blood of the son of Jehoiada the priest, and killed him on his bed. So he died, and they buried him in the city of David, but they did not bury him in the tombs of the kings. Those who conspired against him were Zabad the son of Shimeath the Ammonite, and Jehozabad the son of Shimrith the Moabite. Accounts of his sons and of the many oracles against him and of the rebuilding of the house of God are written in the Story of the Book of the Kings. And Amaziah his son reigned in his place.

Riding on the coattails of another’s faith will not make any difference in the end.  A good start doesn’t promise a faithful finish.  Being too dependent on another for our faith will certainly not make a difference when a crisis hits.  3 statements that simply pack a wallop of truth each and of themselves.

If we are not growing in our personal relationship with Jesus, just because we came from a heritage of faith doesn’t ensure we will be transformed.  Each of us have to be actively engaged in our relationship  in order to grow and stand strong.  Likewise, there are those who come to know Jesus and start off so well but as turmoil or situations assault if they’ve not held invested daily in Him, hearts which are prone to wander, will.

This really sums up Joash on so many fronts.  And honestly, it’s a downright tragedy.

Let’s recap:  At 1 years old grandmother Athaliah decided to slaughter everyone who could take the throne.  In mercy, Joash was hidden in the temple for 6 years by his aunt and uncle.  He was the only survivor of the massacre.  As a priest, his uncle Jehoiada looked after him and plotted and carried out the overthrow of the queen.  As a young one, it would be his uncle as a trusted adviser and godly man, that made most of the decisions for him.  And Joash did some good things, one in significantly was the repairing of the temple.

When uncle Jehoiada died, things fell apart.  Within no time he began to listen to the counsel of wrong people.  Falling headlong into evil, he abandoned the Temple of God and his worship and dove into pagan worship with Asherah poles and idols.  Confronted by prophets, he ignored their words.  He ordered the death of Zechariah who boldly confronted him.  He sold himself out in bribes of the temple treasuries hoping for peace.  In the end, his own people rose up and assassinated him.  He was so terrible, he’s not even mentioned in the genealogy of Jesus!  So much for starting off so well.

King Joash stands as an example who had no real faith relationship with God.  This lack of faith took him places and making decisions that would be to his ruin.

It would be easy though to have a critical eye with this man.  But the reality is he stands as an example for each of us if we are not tuned in personally to Jesus.  We all are prone to wander.  We are prone to simply listen to advice we agree with.  Our daily relationship with Jesus must be nurtured and poured into.  It is critical.

But after the death of Jehoiada the officials of Judah came and bowed down to the king, and the king listened to them.

In other words, after Jehoiada died, the officials of Judah convinced Joash to return to idolatry. It’s such a sad story.

This child was a miracle. He was set aside for the particular task of restoration. He was brought up right and mentored by Jehoiada. It seemed as if he was on the right path. What’s revealed, however, is that Joash was not a leader but a follower. He had no faith of his own. It’s a clear picture of “second-hand faith.”

We all know of those who have such a faith. Maybe you’ve been there before. Second-hand really just means anything that is experienced but not owned. People do this all the time today. Some live off their parent’s faith while others just adopt all the cliche phrases of “Christianese.” In the end, what is revealed is a lack of ownership and absolutely no depth.

The sobering reality is that your fruit will be revealed in the end. Even if you fool those around you, there is no fooling the Lord. You and I will be accountable for this life and how we have lived it. In an age where so many of our failures are blamed on others, there will be absolutely no wiggle room when the Lord looks upon us.

This thought alone is enough to regenerate our declining spiritual condition. We must recognize the grace that’s offered each and every day – even when we fail. Don’t waste it.