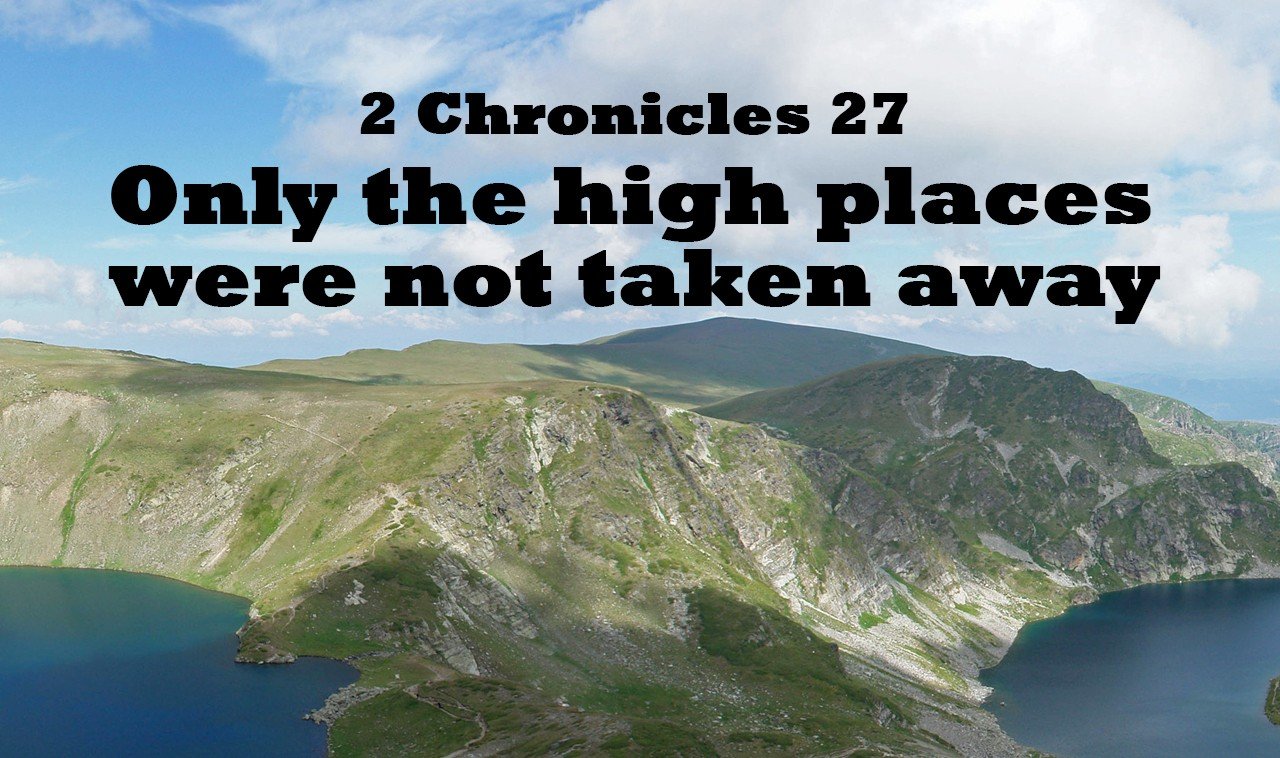 Throw this word in any sentence and it changes the entire first half of what was said.  This small word has the power to negate whatever was said previously.  Consider the statement, “I really enjoy being with you but…”  Or how about this?  “I think you look great today but…”

See what I mean?  This little powerful word speaks toward more emphasis being given to the last of any sentence.  If you were on the receiving end of either of these statements you would be bracing for the worst.

And so grammar lesson aside consider this statement made about Jotham, king of Judah:

“He did right in the sight of the Lord, according to all that his father Uzziah had done; however he did not enter the temple of the Lord. But the people continued acting corruptly.”

What is revealed is, for the most part, Jotham was a good guy.  He made some pretty good choices and was productive.  He also was connected to God.  This, however, didn’t mean the people would follow suit.  In fact, they rebelled completely.  Isaiah 1-5 speaks to the sinfulness they embraced:  they embraced idolatry, had no justice, oppressed the poor, looked toward the military as their answer rather than depending on God, continued to make alliances with pagan nations which allowed that paganism to sweep through their land.  And that’s just a few of the problems.

Even though they had a leader dependent on God, they chose to not follow or do the same.

The reality is just because we make good choices and we ourselves do the right thing, again and again, does not mean people following will do the same.  When you think along these lines with the spiritual bankruptcy in people’s lives who are part of your inner circle, this reality may be discouraging.  This, however, does not mean you yourself compromise.  We cannot force others to make good choices.  We cannot make someone become more dependent on God.  We cannot stir growth in another’s soul.  All we can do is be faithful in our own service and devotion to God and let the Holy Spirit do what is needed in their deficit.

Each of us is called to be faithful no matter what circumstance we are facing or hardships and challenges lay before us.  Even if they are living in the ‘but’ of the situation of your leadership, you are responsible for your behavior and faithfulness.

As Hank has mentioned, the people continued in rebellion under Jotham. Although he was a faithful king, he did have one flaw that stood against him outlined in 2 Kings 15.

He did what was right in the sight of the LORD; he did according to all that his father Uzziah had done. 35 Only the high places were not taken away; the people still sacrificed and burned incense on the high places. He built the upper gate of the house of the LORD.

Sometimes I dislike pointing these out because many commentaries simply focus on the flaws of the kings rather than the whole picture. It’s true that Jotham followed the Lord. But, for whatever reason, he failed to take away the one thing that was leading the people away from God – idols. It’s possible nothing would have changed. We are stubborn and determined to go our own way when we want to. However, this was more about Jotham in the end.

The phrasing of the 2 Kings passage presents to us a failure to follow through. Was he frightened by the backlash? Was he a people-pleaser? Or, was he just sick and tired of dealing with stubborn people? We don’t know for certain. What we do know is that it was Jotham’s role to put the nation in the best possible position to worship the Lord. On many accounts, he did this. In one area, he did not.

Again, we can look at the overall picture and think that the king did pretty well. However, if God was speaking to him to remove the high places and he refused to do so (for whatever reason), he was leading in disobedience. This leads me personally to think about all of what God has been speaking to me lately. Am I following through or am I dragging my feet?

If I’m honest, there has been something that I’ve resisted recently. Just last week, though it was difficult, I was wrestled down by Jesus to move forward with a difficult decision. This decision will cost me a lot, but I will be walking in faithfulness. We must remember that obedience will always trump cost. There is nothing you will give away for Jesus that you will ever want back! What is it today that He’s asking of you and where are you resisting?