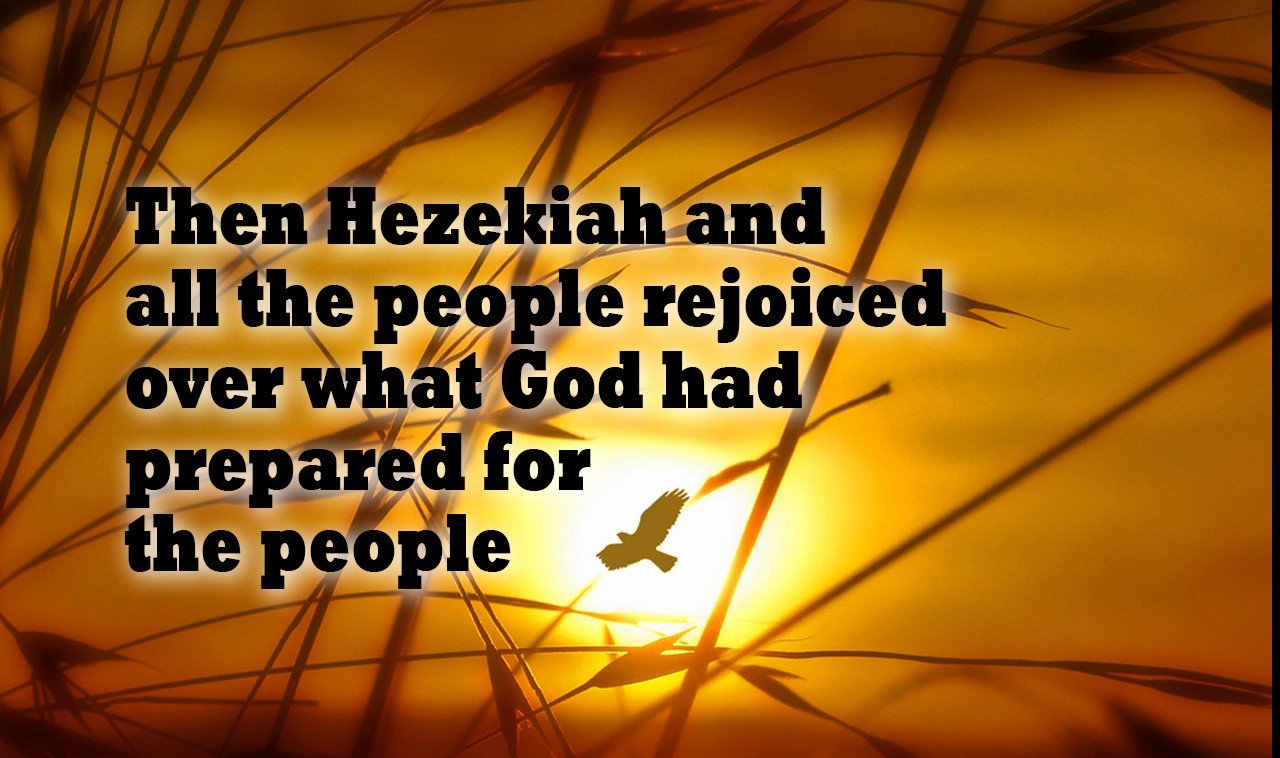 29 Hezekiah began to reign when he was twenty-five years old, and he reigned twenty-nine years in Jerusalem. His mother’s name was Abijah the daughter of Zechariah. And he did what was right in the eyes of the LORD, according to all that David his father had done.

In the first year of his reign, in the first month, he opened the doors of the house of the LORD and repaired them. He brought in the priests and the Levites and assembled them in the square on the east and said to them, “Hear me, Levites! Now consecrate yourselves, and consecrate the house of the LORD, the God of your fathers, and carry out the filth from the Holy Place. For our fathers have been unfaithful and have done what was evil in the sight of the LORD our God. They have forsaken him and have turned away their faces from the habitation of the LORD and turned their backs. They also shut the doors of the vestibule and put out the lamps and have not burned incense or offered burnt offerings in the Holy Place to the God of Israel. Therefore the wrath of the LORD came on Judah and Jerusalem, and he has made them an object of horror, of astonishment, and of hissing, as you see with your own eyes. For behold, our fathers have fallen by the sword, and our sons and our daughters and our wives are in captivity for this. Now it is in my heart to make a covenant with the LORD, the God of Israel, in order that his fierce anger may turn away from us. My sons, do not now be negligent, for the LORD has chosen you to stand in his presence, to minister to him and to be his ministers and make offerings to him.”

And he stationed the Levites in the house of the LORD with cymbals, harps, and lyres, according to the commandment of David and of Gad the king’s seer and of Nathan the prophet, for the commandment was from the LORD through his prophets. The Levites stood with the instruments of David, and the priests with the trumpets. Then Hezekiah commanded that the burnt offering be offered on the altar. And when the burnt offering began, the song to the LORD began also, and the trumpets, accompanied by the instruments of David king of Israel. The whole assembly worshiped, and the singers sang, and the trumpeters sounded. All this continued until the burnt offering was finished. When the offering was finished, the king and all who were present with him bowed themselves and worshiped. And Hezekiah the king and the officials commanded the Levites to sing praises to the LORD with the words of David and of Asaph the seer. And they sang praises with gladness, and they bowed down and worshiped.

Sometimes watching someone else fall is enough motivation to change course.  The ramifications of choices of another can be something that brings about a resolve personally to make choices we don’t do the same.

This could have been the motivation for the incredible leadership of Hezekiah.   He was one king who brought about great reforms to the Southern Kingdom of Judah.  There is no doubt part of his godly choices was based upon the way he was raised.  His mother was Abijah, a daughter of Zechariah who was mentioned by Isaiah in Isaiah 8 as a faithful witness.  Her friendship with the powerhouse prophet Isaiah would have made an impact on her.  Consequently, that impact was passed onto her children.

But the other reality was not soon after Hezekiah took the throne he watched as the Northern Kingdom fell.  The rogue nation had given into idol worship and was overrun by the Assyrians 6 years after the crown rested on his brow.  The consequences of the Northern Kingdom’s demise was a living example of those who rejected God and His commands.  Hezekiah was determined to follow God and would go to whatever necessary reforms needed within his kingdom.

Throughout the stories of Hezekiah, we see a king who had an incredible prayer life.  He was attuned to his God.  He brought about civil and religious reforms even going so far as removing the high places, which few kings would do.  The Temple of God whose doors had been nailed shut during his father’s reign were reopened.  The Passover would be reinstituted.  Hezekiah was most concerned about living in obedience daily.

Revival burst forth across the nation of Judah.

“He trusted in the Lord, the God of Israel; so that after him there was none like him among all the kings of Judah, nor among those who were before him. 6 For he clung to the Lord; he did not depart from following Him, but kept His commandments, which the Lord had commanded Moses.”

God’s desire is the same for each of us.  And He will go to whatever length to bring us into such a state of obedience even at the cost of watching someone else who has walked away from Him.  Our actions today are a statement of our heart.  They also are fodder for what tomorrow looks like and how closely not only we will follow but others as well.

In the first month…

There were many decisions that needed attention when coming into power as a king. Certainly, there would have been personal decisions, political decisions, military decisions and economic decisions. There was so much to do.

From everyone who has been given much, much will be required; and to whom they entrusted much, of him they will ask all the more.

It makes me think of our current political culture. A new president is evaluated based on how much he or she accomplishes in the first 100 days. It’s a measurement that started with FDR when he signed a ridiculous 76 bills into law during his “First 100.”

For Hezekiah, it would be his first 30 days. What would he do? Where would he start to address all of the issues of the past? He would begin with the highest priority that would affect everything else – spiritual worship.

In the first year of his reign, in the first month, he opened the doors of the house of the LORD and repaired them.

It’s a basic but powerful message. When you are given responsibility and authority, where are your priorities? Do you try and repair the issues that plague you by focusing on everything else instead of your faith? Trust me, I have learned recently that when we obsess over fixing some issue in our life without taking it to God, it will, many times, result in heartbreak. Jesus is not just the highest priority. He is the lens through which we view our priorities. He will be faithful to direct our steps.