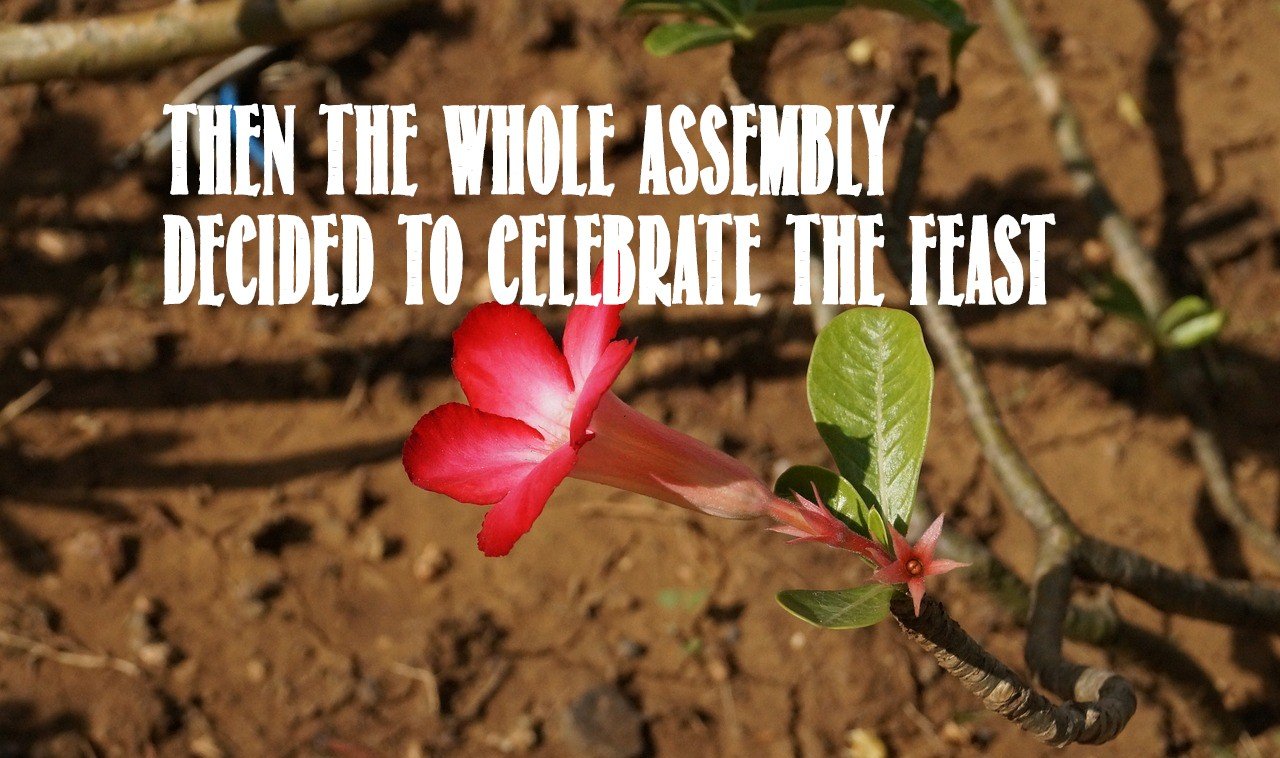 30 Hezekiah sent to all Israel and Judah, and wrote letters also to Ephraim and Manasseh, that they should come to the house of the LORD at Jerusalem to keep the Passover to the LORD, the God of Israel. For the king and his princes and all the assembly in Jerusalem had taken counsel to keep the Passover in the second month—for they could not keep it at that time because the priests had not consecrated themselves in sufficient number, nor had the people assembled in Jerusalem—and the plan seemed right to the king and all the assembly. So they decreed to make a proclamation throughout all Israel, from Beersheba to Dan, that the people should come and keep the Passover to the LORD, the God of Israel, at Jerusalem, for they had not kept it as often as prescribed. So couriers went throughout all Israel and Judah with letters from the king and his princes, as the king had commanded, saying, “O people of Israel, return to the LORD, the God of Abraham, Isaac, and Israel, that he may turn again to the remnant of you who have escaped from the hand of the kings of Assyria. Do not be like your fathers and your brothers, who were faithless to the LORD God of their fathers, so that he made them a desolation, as you see. Do not now be stiff-necked as your fathers were, but yield yourselves to the LORD and come to his sanctuary, which he has consecrated forever, and serve the LORD your God, that his fierce anger may turn away from you. For if you return to the LORD, your brothers and your children will find compassion with their captors and return to this land. For the LORD your God is gracious and merciful and will not turn away his face from you, if you return to him.”

So the couriers went from city to city through the country of Ephraim and Manasseh, and as far as Zebulun, but they laughed them to scorn and mocked them. However, some men of Asher, of Manasseh, and of Zebulun humbled themselves and came to Jerusalem. The hand of God was also on Judah to give them one heart to do what the king and the princes commanded by the word of the LORD.

And many people came together in Jerusalem to keep the Feast of Unleavened Bread in the second month, a very great assembly. They set to work and removed the altars that were in Jerusalem, and all the altars for burning incense they took away and threw into the brook Kidron. And they slaughtered the Passover lamb on the fourteenth day of the second month. And the priests and the Levites were ashamed, so that they consecrated themselves and brought burnt offerings into the house of the LORD. They took their accustomed posts according to the Law of Moses the man of God. The priests threw the blood that they received from the hand of the Levites. For there were many in the assembly who had not consecrated themselves. Therefore the Levites had to slaughter the Passover lamb for everyone who was not clean, to consecrate it to the LORD. For a majority of the people, many of them from Ephraim, Manasseh, Issachar, and Zebulun, had not cleansed themselves, yet they ate the Passover otherwise than as prescribed. For Hezekiah had prayed for them, saying, “May the good LORD pardon everyone who sets his heart to seek God, the LORD, the God of his fathers, even though not according to the sanctuary’s rules of cleanness.” And the LORD heard Hezekiah and healed the people. And the people of Israel who were present at Jerusalem kept the Feast of Unleavened Bread seven days with great gladness, and the Levites and the priests praised the LORD day by day, singing with all their might to the LORD. And Hezekiah spoke encouragingly to all the Levites who showed good skill in the service of the LORD. So they ate the food of the festival for seven days, sacrificing peace offerings and giving thanks to the LORD, the God of their fathers.

Then the whole assembly agreed together to keep the feast for another seven days. So they kept it for another seven days with gladness. For Hezekiah king of Judah gave the assembly 1,000 bulls and 7,000 sheep for offerings, and the princes gave the assembly 1,000 bulls and 10,000 sheep. And the priests consecrated themselves in great numbers. The whole assembly of Judah, and the priests and the Levites, and the whole assembly that came out of Israel, and the sojourners who came out of the land of Israel, and the sojourners who lived in Judah, rejoiced. So there was great joy in Jerusalem, for since the time of Solomon the son of David king of Israel there had been nothing like this in Jerusalem. Then the priests and the Levites arose and blessed the people, and their voice was heard, and their prayer came to his holy habitation in heaven.

It was a tough conversation.

Life had bottomed out for this person.  Everything they had given thought and poured themselves into was teetering.  They were broken.  Grace was needed but so was truth.  The fact of the matter, God had orchestrated this meeting.  I had been in prayer over specifics with this individual for months.  That, however, did not make what was needed to be said any easier.  I had been down this path several times with others and when that moment came for a truth conversation – well, they walked away.   They quit.  It hurt. There are days I still grieve over them.

However, the reality was I had to be obedient in what Jesus was asking of me, regardless of the outcome.  An outcome in this example yet to be written.

Hezekiah began the overhaul of reforms that were detrimental to the people, one of which was Passover.  It would be in a letter he wrote to Judah that was bold.  It was truth filled.  It was on many fronts a line in the sand.  The truth of the matter was Hezekiah was a king who felt the call and took action in calling the nation to spiritual renewal and commitment.  Stop being stubborn.  Submit to God.  Obey Him with all He is asking.  These were the things he called of them.

In one form or another, we are in leadership.  Whether it is within the household, at a church, or in the workplace, each of us who are ambassadors of the Lord Jesus Christ have such a calling to honor God, show grace but speak truth.  Sometimes such actions will bring about what was not the desired response.  Other times it will light the fire to serving God in a deeper way than previously.  The reality is we cannot allow a prospective outcome dictate our own obedience.  Each and every one of us is called to instill a calling to those around of a deeper relationship with Jesus.  We are called to challenge others toward spiritual progress.

What does that look like for you?  Jesus knows.  You just must be obedient and resolved to do what is asked of you.

Hezekiah wanted to do the right thing. He believed that Israel and Judah should come back together in order to celebrate the Passover. He knew God’s promises extended to all 12 tribes which were now split into two nations. Amazingly, invitations went out to all of Israel despite 200+ years of backsliding and pagan influence. This speaks to the fact that God had provided a faithful remnant.

Judah was guilty of backsliding as well. They had become ignorant to God’s truth throughout their previous leadership under Ahaz. So, this decision by Hezekiah set the tone for spiritual revival. Though both nations were steeped with poor leaders, they were hungry to be taught the truth of the Lord. This was where the Levites would step up to fulfill their God-given responsibilities. They would teach the people about their history and remind them of the amazing covenant from God.

Then Hezekiah spoke encouragingly to all the Levites who showed good insight in the things of the LORD. So they ate for the appointed seven days, sacrificing peace offerings and giving thanks to the LORD God of their fathers.

Sometimes we just need to be reminded of the promises of God through good and faithful teaching. In fact, most of us would agree that going to church on Sunday to gather with others and hear solid Biblical teaching sets the stage for spiritual revival.