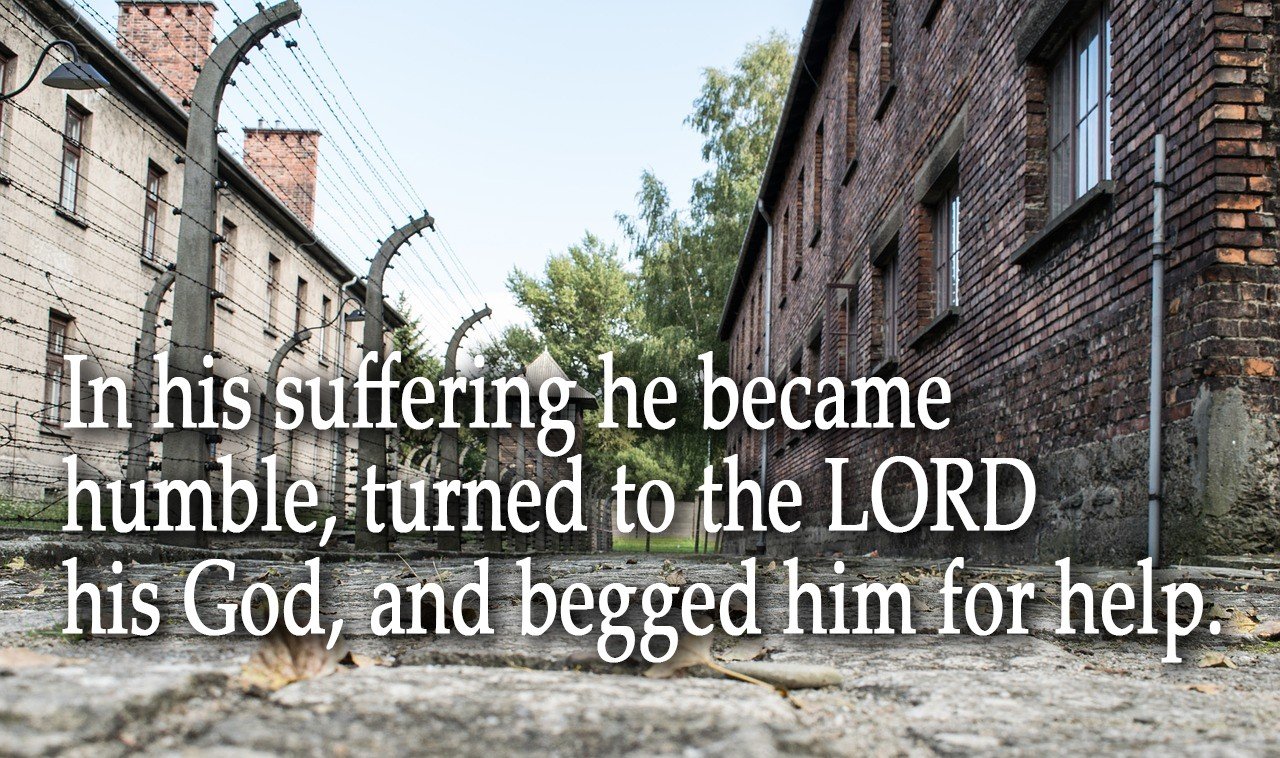 33 Manasseh was twelve years old when he began to reign, and he reigned fifty-five years in Jerusalem. And he did what was evil in the sight of the LORD, according to the abominations of the nations whom the LORD drove out before the people of Israel. For he rebuilt the high places that his father Hezekiah had broken down, and he erected altars to the Baals, and made Asheroth, and worshiped all the host of heaven and served them. And he built altars in the house of the LORD, of which the LORD had said, “In Jerusalem shall my name be forever.” And he built altars for all the host of heaven in the two courts of the house of the LORD. And he burned his sons as an offering in the Valley of the Son of Hinnom, and used fortune-telling and omens and sorcery, and dealt with mediums and with necromancers. He did much evil in the sight of the LORD, provoking him to anger. And the carved image of the idol that he had made he set in the house of God, of which God said to David and to Solomon his son, “In this house, and in Jerusalem, which I have chosen out of all the tribes of Israel, I will put my name forever, and I will no more remove the foot of Israel from the land that I appointed for your fathers, if only they will be careful to do all that I have commanded them, all the law, the statutes, and the rules given through Moses.” Manasseh led Judah and the inhabitants of Jerusalem astray, to do more evil than the nations whom the LORD destroyed before the people of Israel.

The LORD spoke to Manasseh and to his people, but they paid no attention. Therefore the LORD brought upon them the commanders of the army of the king of Assyria, who captured Manasseh with hooks and bound him with chains of bronze and brought him to Babylon. And when he was in distress, he entreated the favor of the LORD his God and humbled himself greatly before the God of his fathers. He prayed to him, and God was moved by his entreaty and heard his plea and brought him again to Jerusalem into his kingdom. Then Manasseh knew that the LORD was God.

Afterward he built an outer wall for the city of David west of Gihon, in the valley, and for the entrance into the Fish Gate, and carried it around Ophel, and raised it to a very great height. He also put commanders of the army in all the fortified cities in Judah. And he took away the foreign gods and the idol from the house of the LORD, and all the altars that he had built on the mountain of the house of the LORD and in Jerusalem, and he threw them outside of the city. He also restored the altar of the LORD and offered on it sacrifices of peace offerings and of thanksgiving, and he commanded Judah to serve the LORD, the God of Israel. Nevertheless, the people still sacrificed at the high places, but only to the LORD their God.

Now the rest of the acts of Manasseh, and his prayer to his God, and the words of the seers who spoke to him in the name of the LORD, the God of Israel, behold, they are in the Chronicles of the Kings of Israel. And his prayer, and how God was moved by his entreaty, and all his sin and his faithlessness, and the sites on which he built high places and set up the Asherim and the images, before he humbled himself, behold, they are written in the Chronicles of the Seers. So Manasseh slept with his fathers, and they buried him in his house, and Amon his son reigned in his place.

“Because you rage against me and because your insolence has reached my ears, i will put my hook in your nose and my bit in your mouth and I will make you return by the way you came.”

Let’s get honest.  The concept of a hook in the nose sounds incredibly painful.  One of the common torture tactics of the Assyrians used on their captives was to place hooks in their noses and horse bits in their mouth and lead them where they were returning.  With the jerk of the chain the pain the would rip cartilage and send someone over the edge.  This was not only an act to bring humiliation but was also a way they controlled those who had rebelled against them.

The Isaiah passage directly speaks toward the Assyrians themselves, specifically of King Sennacherib who had come against Judah during Hezekiah’s reign.  Where there is irony is after Hezekiah died and his son Manasseh took the throne he would find this same prophecy being fulfilled upon himself.  In the ranking of most evil kings, Manasseh is pretty close to the top.

2 Kings reveals he spilled so much innocent blood that Jerusalem was filled with it from one end of the city to the other.  His evilness was off the charts as he made decisions to intentionally offend God bringing idols into the temple.  He sacrificed his own children to them.  He reversed so many of the reforms his father made, the nation was back to square one.

God would do whatever it took to get this man’s attention.  In this case, it would not only be a physical hook inserted in his nose but a bridle in his mouth as he was captured and taken to Babylon.  What we find is in that the hook and bridle did the job of what God wanted – Manasseh became humble.  In repentance, he surrendered to the Lord of all.

I’ve prayed at times for those I’m burdened that God would put His hook in their nose and lead them back to where they are humble enough to admit their failures and sin.  It’s a pretty graphic prayer for certain knowing what it meant then.  But the fact remains that God loves people even in all their rebellion.  And the fact remains God will go to whatever length He must to humble them to the point of surrender.  And one last fact is true – genuine repentance and admittance of sin restores.  God’s grace covers all – even the most heinous of sins and waywardness of hearts.  He loves enough to do whatever it takes to bring them to that point.

Sometimes it has to hurt in order to draw genuine Godly repentance. It’s not a concept we like to think about, but it is true. Though Manasseh’s acts were heinous and evil, God allowed for him to suffer temporarily in order to be restored eternally.

In thinking about this, I’ve wondered what role we should take as bystanders to such a situation? How should we pray? What should we do? How much should we be involved?

The truth for many of the kings was that they simply refused to listen to prophets. Some did, but most did not. Even though the truth of God was spoken, it wasn’t enough to deter human nature. Sometimes it has to hurt.

The truth for many we know today is that they simply refuse to listen to Christians. Again, some do, but most do not. Even though we could hammer them over the head with the truth of God, if the timing is not divine, it will only potentially push them further away. I know many who wield this weapon regularly. Sometimes it has to hurt.

It can be the most difficult thing ever to see a spiritual downfall just waiting to happen. This is especially true for those whom we love deeply or those living under our own roof. We long to see them transformed but must trust God with the details. Yes, sometimes it has to hurt. Does this mean we simply don’t care? Far from it. It means we care so much that we trust God with doing what He does best – heart change.

And yes, those who step back and pray that the consequences will turn a rebel heart will experience just as much hurt and pain. But this is what we signed up for as Christians. We carry burdens. We pray. We trust. We commit to others and relentlessly pursue them just as God pursued us. We offer grace and truth at every turn.

Where are you possibly trying to control a situation where consequences must take place? Where are you hammering away at truth statements rather than letting the Holy Spirit do His thing? The hurts we experience today cannot compare to the glorious transformation that will come from trusting in Him.