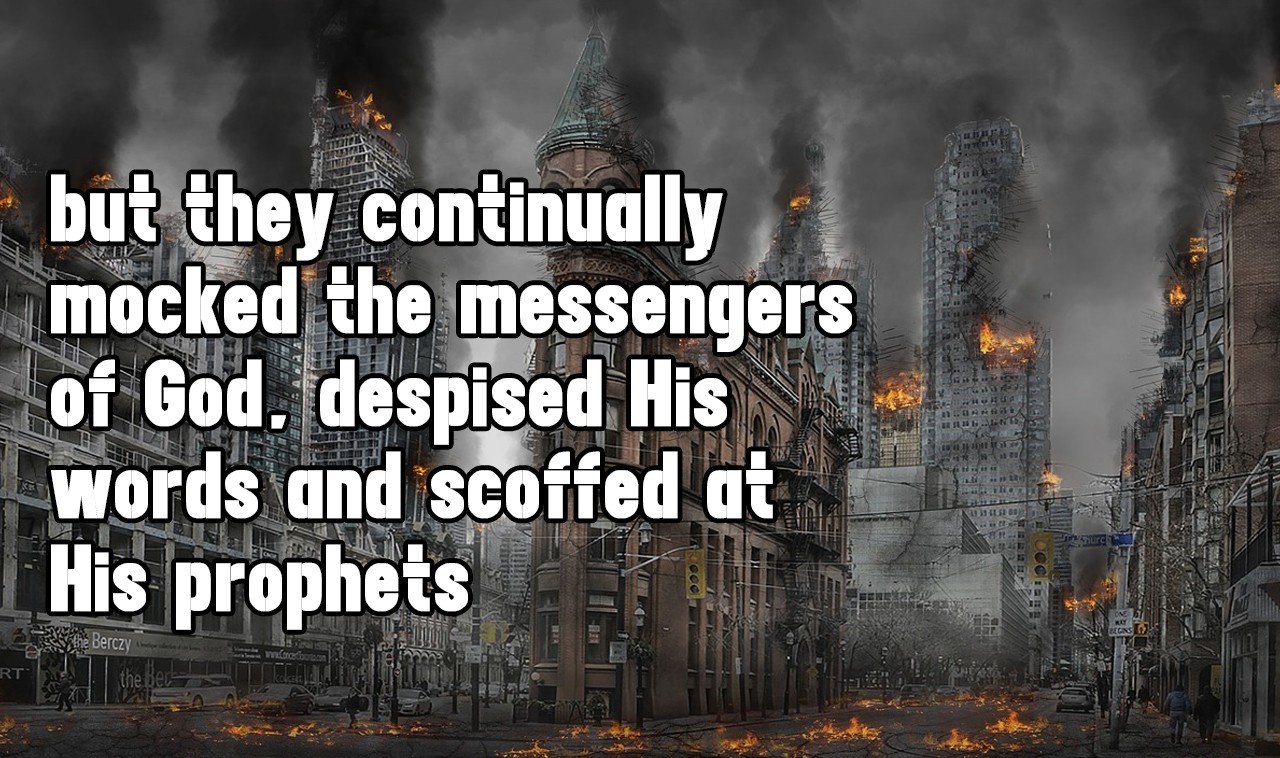 36 The people of the land took Jehoahaz the son of Josiah and made him king in his father’s place in Jerusalem. Jehoahaz was twenty-three years old when he began to reign, and he reigned three months in Jerusalem. Then the king of Egypt deposed him in Jerusalem and laid on the land a tribute of a hundred talents of silver and a talent of gold. And the king of Egypt made Eliakim his brother king over Judah and Jerusalem, and changed his name to Jehoiakim. But Neco took Jehoahaz his brother and carried him to Egypt.

Jehoiakim was twenty-five years old when he began to reign, and he reigned eleven years in Jerusalem. He did what was evil in the sight of the LORD his God. Against him came up Nebuchadnezzar king of Babylon and bound him in chains to take him to Babylon. Nebuchadnezzar also carried part of the vessels of the house of the LORD to Babylon and put them in his palace in Babylon. Now the rest of the acts of Jehoiakim, and the abominations that he did, and what was found against him, behold, they are written in the Book of the Kings of Israel and Judah. And Jehoiachin his son reigned in his place.

Jehoiachin was eighteen years old when he became king, and he reigned three months and ten days in Jerusalem. He did what was evil in the sight of the LORD. In the spring of the year King Nebuchadnezzar sent and brought him to Babylon, with the precious vessels of the house of the LORD, and made his brother Zedekiah king over Judah and Jerusalem.

Zedekiah was twenty-one years old when he began to reign, and he reigned eleven years in Jerusalem. He did what was evil in the sight of the LORD his God. He did not humble himself before Jeremiah the prophet, who spoke from the mouth of the LORD. He also rebelled against King Nebuchadnezzar, who had made him swear by God. He stiffened his neck and hardened his heart against turning to the LORD, the God of Israel. All the officers of the priests and the people likewise were exceedingly unfaithful, following all the abominations of the nations. And they polluted the house of the LORD that he had made holy in Jerusalem.

The LORD, the God of their fathers, sent persistently to them by his messengers, because he had compassion on his people and on his dwelling place. But they kept mocking the messengers of God, despising his words and scoffing at his prophets, until the wrath of the LORD rose against his people, until there was no remedy.

Therefore he brought up against them the king of the Chaldeans, who killed their young men with the sword in the house of their sanctuary and had no compassion on young man or virgin, old man or aged. He gave them all into his hand. And all the vessels of the house of God, great and small, and the treasures of the house of the LORD, and the treasures of the king and of his princes, all these he brought to Babylon. And they burned the house of God and broke down the wall of Jerusalem and burned all its palaces with fire and destroyed all its precious vessels. He took into exile in Babylon those who had escaped from the sword, and they became servants to him and to his sons until the establishment of the kingdom of Persia, to fulfill the word of the LORD by the mouth of Jeremiah, until the land had enjoyed its Sabbaths. All the days that it lay desolate it kept Sabbath, to fulfill seventy years.

The Proclamation of Cyrus

Now in the first year of Cyrus king of Persia, that the word of the LORD by the mouth of Jeremiah might be fulfilled, the LORD stirred up the spirit of Cyrus king of Persia, so that he made a proclamation throughout all his kingdom and also put it in writing: “Thus says Cyrus king of Persia, ‘The LORD, the God of heaven, has given me all the kingdoms of the earth, and he has charged me to build him a house at Jerusalem, which is in Judah. Whoever is among you of all his people, may the LORD his God be with him. Let him go up.’”

Sin repeated and not repented of brings disaster.

This is the theme Ezra hit again and again in 2 Chronicles.   The Temple was very dear to his heart and he wanted the people who read this to see all the ups and downs of people who followed God and those who when chose not to disaster followed.  He would be in the first wave of people who returned to Jerusalem after the captivity of Babylon to reconstruct the Temple. His account was a warning.

David had prepared all the plans for this glorious structure.  Solomon would carry out the instructions where finally the people had a structure to come and worship their God.  Yet, it would be the kings who followed that gave way to sin again and again that slowly the Temple and its glory were destroyed.  Finally, Nebuchadnezzar would completely destroy the Temple.  The kings were gone.  The Temple stood in ruins.  The nation became derelict in its testimony of God.  Sin did that.

And sin does that to each of us.  The glory of God is placed in each one of us.  His presence through the Holy Spirit is gifted so we would follow and obey.  Not only is it for our own good to move in the ways of God, it is a testimony of God’s grace lived out and a testimony of Him.  Yet, when sin goes unchecked.  When we choose to not repent and be obedient to the ways of God, destruction will come.  The ugliness of sin can leave us much the same as the structure of Temple that once thrived with the beauty and worship of God to simply ruins.

The LORD, the God of their fathers, sent word to them again and again by His messengers, because He had compassion on His people and on His dwelling place; 16 but they continually mocked the messengers of God, despised His words and scoffed at His prophets, until the wrath of the LORD arose against His people, until there was no remedy.

Any skeptic who doesn’t believe in the grace of God only needs to read the Old Testament to get a good perspective. Imagine if the people of Israel and Judah were your children. How would you respond to their continual and repeated sin patterns? Imagine if they were your employees. They probably wouldn’t even make it past Genesis. The point is, God was patient. He was much more patient than any of us, especially considering the horrific sins that continued to plague His people.

I mean, just in this book alone we read of a king who sacrificed his own children on a burning altar! This should be disturbing to any human being regardless of your beliefs. So, what should God do at this point? What should be done about sin?

The writer of 2 Chronicles take a grim perspective. The Lord arose against His people and there was no remedy. The point of no return had been reached. In his book, The Grace and Truth Paradox, Randy Alcorn illustrates this exact scenario by telling a story.

Imagine a great and generous king. In the midst of his benevolent reign, he hears that his subjects have revolted. He sends messengers to investigate. The rebels kill them. So he sends his own dear son, the prince. They murder him viciously, hanging his body on the city wall. What would you expect the king to do now? Send his armies and take revenge, right? Kill those rebels! Burn their villages to ashes! That king certainly has both the power and the right to avenge himself. But what if the king turned around and offered these criminals a full pardon? “I will accept my son— whom you murdered— as the payment for all your rebellion. You may go free.

All I require is for you to admit your transgressions and embrace my son’s purchase of your forgiveness.” We’d be stunned— blown away— to hear this, wouldn’t we? But the king’s not finished. “I invite any of you to come live in my palace, eat at my table, and enjoy all the pleasures of my kingdom. And I will adopt you as my own children and make you my heirs, so everything that’s mine will be yours forever.”

Incredible. Then he says, “I won’t force you to accept my offer. But the only alternative is spending the rest of your life in prison. The choice is yours.” Can you imagine someone responding, “How dare the king send anyone to prison? What a cruel tyrant!”? This is God’s grace to us.

The stories in Chronicles help us to realize exactly why Jesus had to come. They also help us to understand why Jesus was rejected. The grace of God is amazing and incomprehensible. We must never forget this.