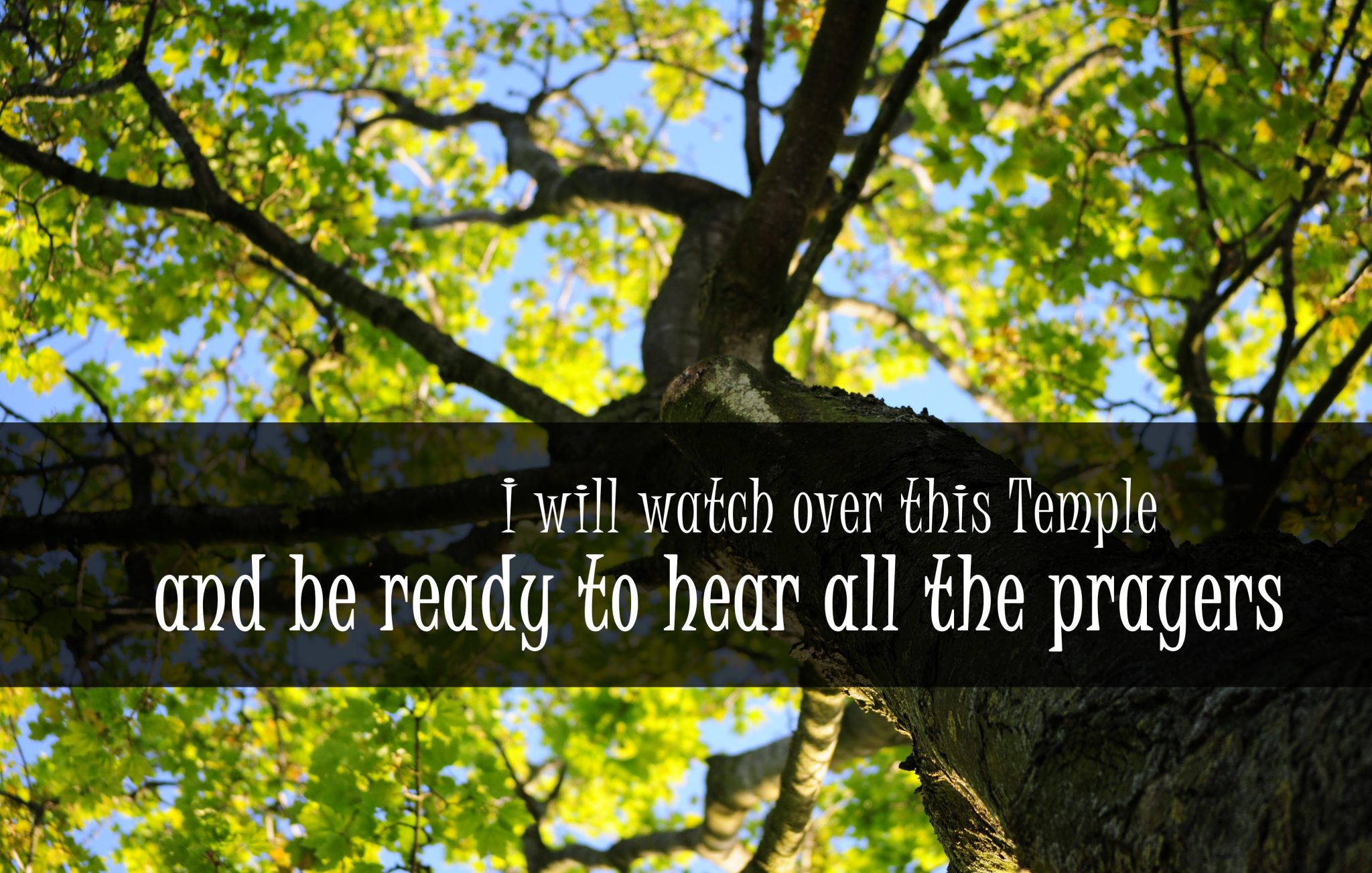 The Dedication of the Temple

Then the king and all the people offered sacrifice before the LORD. King Solomon offered as a sacrifice 22,000 oxen and 120,000 sheep. So the king and all the people dedicated the house of God. The priests stood at their posts; the Levites also, with the instruments for music to the LORD that King David had made for giving thanks to the LORD—for his steadfast love endures forever—whenever David offered praises by their ministry; opposite them the priests sounded trumpets, and all Israel stood.

At that time Solomon held the feast for seven days, and all Israel with him, a very great assembly, from Lebo-hamath to the Brook of Egypt. And on the eighth day they held a solemn assembly, for they had kept the dedication of the altar seven days and the feast seven days. On the twenty-third day of the seventh month he sent the people away to their homes, joyful and glad of heart for the prosperity that the LORD had granted to David and to Solomon and to Israel his people.

If My People Pray

Thus Solomon finished the house of the LORD and the king’s house. All that Solomon had planned to do in the house of the LORD and in his own house he successfully accomplished. Then the LORD appeared to Solomon in the night and said to him: “I have heard your prayer and have chosen this place for myself as a house of sacrifice. When I shut up the heavens so that there is no rain, or command the locust to devour the land, or send pestilence among my people, if my people who are called by my name humble themselves, and pray and seek my face and turn from their wicked ways, then I will hear from heaven and will forgive their sin and heal their land. Now my eyes will be open and my ears attentive to the prayer that is made in this place. For now I have chosen and consecrated this house that my name may be there forever. My eyes and my heart will be there for all time. And as for you, if you will walk before me as David your father walked, doing according to all that I have commanded you and keeping my statutes and my rules, then I will establish your royal throne, as I covenanted with David your father, saying, ‘You shall not lack a man to rule Israel.’

“But if you turn aside and forsake my statutes and my commandments that I have set before you, and go and serve other gods and worship them, then I will pluck you up from my land that I have given you, and this house that I have consecrated for my name, I will cast out of my sight, and I will make it a proverb and a byword among all peoples. And at this house, which was exalted, everyone passing by will be astonished and say, ‘Why has the LORD done thus to this land and to this house?’ Then they will say, ‘Because they abandoned the LORD, the God of their fathers who brought them out of the land of Egypt, and laid hold on other gods and worshiped them and served them. Therefore he has brought all this disaster on them.’”

Grace is free.  It’s a beautiful thing God has offered.  But grace is costly as well.  It cost Jesus everything.  It costs us as well for when grace is extended there is an expectation we will change our ways.  We like the first part of this, not so much the second.

The temple dedicated, a festival that followed, everyone was so encouraged and filled with joy as to what God had done for them.  Then God showed up to Solomon one night.  There was beauty to His words and warnings. Solomon had asked many things recorded in his prayer in chapter 6.  One of these was God would make provision for the people when they sinned to find forgiveness.  God addressed this.  But He also gave warnings to Solomon specifically that He needed to be committed to Him on every level.

Within God’s statements about forgiveness, He laid out 4 conditions for this to be granted.  There must be an admission of sin.  People have to own up to what they’ve done wrong.  Prayer must follow as having recognized our state, humbly ask him to forgive our waywardness.  He also speaks toward our continual seeking of Him and then turn from the behavior that has brought the rift between us and Him.

True repentance of our ways is far more than words and pleading.  It is changing our behavior.  This is what God looks toward.  In essence, He states “I will..” if “you will…”

The battle we each hold with sin and waywardness is real.  We all know this.  Humility is something none of us come by easily.  This is particularly true when it comes to admitting we made a mistake.  Think about it this way, when we hurt or harm another through our own actions or attitudes, truly the healing of that relationship never happens until fault is admitted.  If we choose to dig in our feet the relationship suffers and sometimes severs.

On a small scale, this is something we know in our own personal relationships.  How much grander is this between us and the Father.  Until we admit our wrong, choose to correct it and push forward in attempting to change that which brought the division, we will not find the freedom and restoration He lovingly wants to give.

The temptation of reading this promise from God is to universally apply it to national and personal situations. For instance, many believe that if we as a nation would repent, God would hear our plea and bless our nation. For others, the promise is more personal. If we come to God in repentance personally, He will bless us in that way. But, we must ask, is this the right interpretation?

One aspect of Israel that often fails to be considered is that their nation was God’s chosen nation. They were His people whom He made a special covenant with. There is no other nation on the planet who can claim this privilege. So, in context, we must understand that this promise was made to Israel in a very specific way. Even though we know that repentance is what God requires, we must caution ourselves from applying this truth as an “apples to apples” comparison today.

What about personally? Certainly, repentance is the beginning of receiving the grace offered to us. I agree wholeheartedly with this point, however, there is one glaring difference. Individual Christians have not been called as a nation. We have been called to be the church, which does look different. Again, personally speaking, when we repent, God does not heal everything about our lives. In fact, the early apostles would attest to the fact that when they followed after Christ, their lives actually became more chaotic!

The temptation personally is to apply this verse to mean that if we do good things that God wants us to do, then we will receive all His material blessings. We know this is simply not how Salvation through Jesus works. We are empowered to do great things after repentance and grace through faith. However, that does not mean health, wealth, and prosperity. The message of Christ is that we would die to ourselves so that He would make us holy. Often, that process can be painful. But, the spiritual blessings we receive are indescribable!

There is great truth we can take from this passage for today. Repentance is still what God longs for. His promises never fail. He is a loving God who extends grace at every turn and continues to draw us near. But, He is also a holy God who showed us how serious He was about that holiness when He placed His Son on a cross. This is what we must cling to.