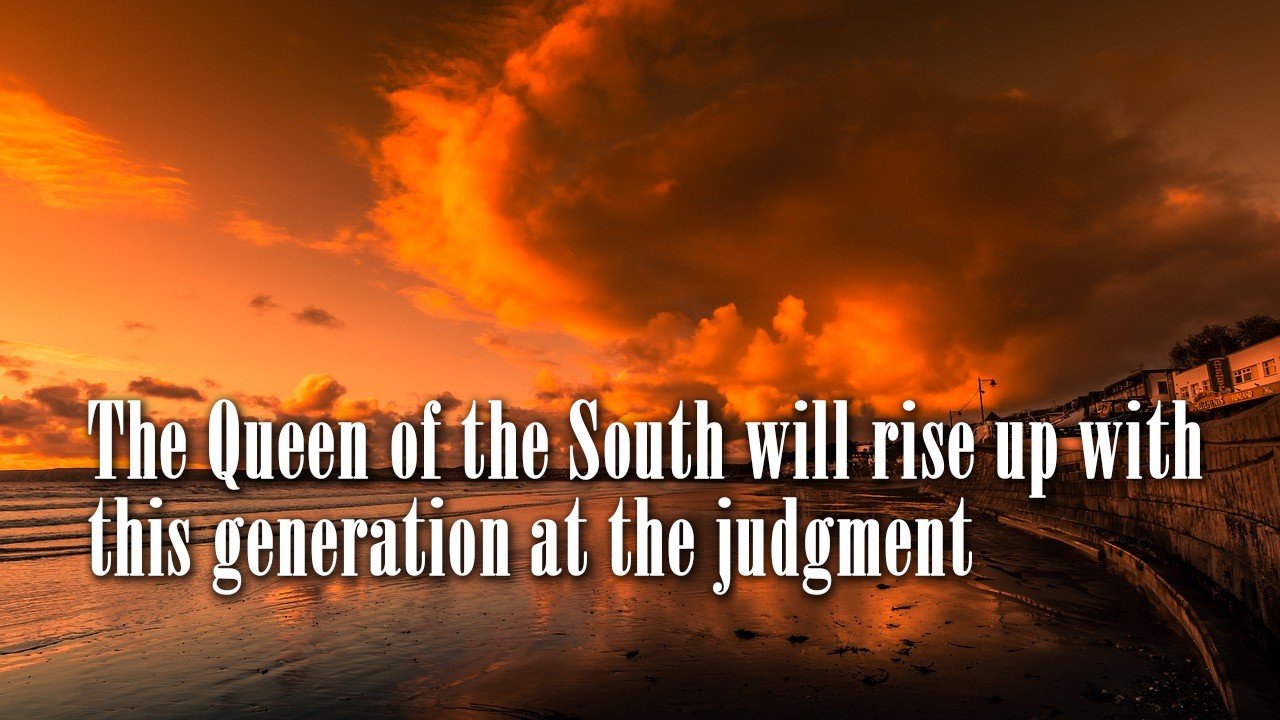 The Queen of Sheba

9 Now when the queen of Sheba heard of the fame of Solomon, she came to Jerusalem to test him with hard questions, having a very great retinue and camels bearing spices and very much gold and precious stones. And when she came to Solomon, she told him all that was on her mind. And Solomon answered all her questions. There was nothing hidden from Solomon that he could not explain to her. And when the queen of Sheba had seen the wisdom of Solomon, the house that he had built, the food of his table, the seating of his officials, and the attendance of his servants, and their clothing, his cupbearers, and their clothing, and his burnt offerings that he offered at the house of the LORD, there was no more breath in her.

And she said to the king, “The report was true that I heard in my own land of your words and of your wisdom, but I did not believe the reports until I came and my own eyes had seen it. And behold, half the greatness of your wisdom was not told me; you surpass the report that I heard. Happy are your wives! Happy are these your servants, who continually stand before you and hear your wisdom! Blessed be the LORD your God, who has delighted in you and set you on his throne as king for the LORD your God! Because your God loved Israel and would establish them forever, he has made you king over them, that you may execute justice and righteousness.” Then she gave the king 120 talents of gold, and a very great quantity of spices, and precious stones. There were no spices such as those that the queen of Sheba gave to King Solomon.

Moreover, the servants of Hiram and the servants of Solomon, who brought gold from Ophir, brought algum wood and precious stones. And the king made from the algum wood supports for the house of the LORD and for the king’s house, lyres also and harps for the singers. There never was seen the like of them before in the land of Judah.

And King Solomon gave to the queen of Sheba all that she desired, whatever she asked besides what she had brought to the king. So she turned and went back to her own land with her servants.

Now the weight of gold that came to Solomon in one year was 666 talents of gold, besides that which the explorers and merchants brought. And all the kings of Arabia and the governors of the land brought gold and silver to Solomon. King Solomon made 200 large shields of beaten gold; 600 shekels of beaten gold went into each shield. And he made 300 shields of beaten gold; 300 shekels of gold went into each shield; and the king put them in the House of the Forest of Lebanon. The king also made a great ivory throne and overlaid it with pure gold. The throne had six steps and a footstool of gold, which were attached to the throne, and on each side of the seat were armrests and two lions standing beside the armrests, while twelve lions stood there, one on each end of a step on the six steps. Nothing like it was ever made for any kingdom. All King Solomon’s drinking vessels were of gold, and all the vessels of the House of the Forest of Lebanon were of pure gold. Silver was not considered as anything in the days of Solomon. For the king’s ships went to Tarshish with the servants of Hiram. Once every three years the ships of Tarshish used to come bringing gold, silver, ivory, apes, and peacocks.

Thus King Solomon excelled all the kings of the earth in riches and in wisdom. And all the kings of the earth sought the presence of Solomon to hear his wisdom, which God had put into his mind. Every one of them brought his present, articles of silver and of gold, garments, myrrh, spices, horses, and mules, so much year by year. And Solomon had 4,000 stalls for horses and chariots, and 12,000 horsemen, whom he stationed in the chariot cities and with the king in Jerusalem. And he ruled over all the kings from the Euphrates to the land of the Philistines and to the border of Egypt. And the king made silver as common in Jerusalem as stone, and he made cedar as plentiful as the sycamore of the Shephelah. And horses were imported for Solomon from Egypt and from all lands.

Now the rest of the acts of Solomon, from first to last, are they not written in the history of Nathan the prophet, and in the prophecy of Ahijah the Shilonite, and in the visions of Iddo the seer concerning Jeroboam the son of Nebat? Solomon reigned in Jerusalem over all Israel forty years. And Solomon slept with his fathers and was buried in the city of David his father, and Rehoboam his son reigned in his place.

We all have one.  It’s really not by design or the will of man.  We can set the table for it but truly what is in the heart reveals the truth of our character and reputation.  The saying goes, “Our reputation precedes us” and indeed it does.  The reality is our reputation is birthed from our character and no matter what we do on the outside, all of this begins within.  It’s about how we live out our convictions.  It comes through what we stand for and interact with others.

We all have one.  What is your reputation among other Believers, the world, seekers?

There are some who as Believers are simply negative.  They may be good people but all that comes from their mouths are critical words.  There are Believers who struggle with some illness or physical situation.  How you are responding reflects something far deeper of your personal relationship to Jesus.  It translates in your daily actions.  There are Followers who are blessed physically and materially.  How strongly they hold onto their wallet and spend generously toward kingdom matters speaks profoundly.

What is the measure of your reputation?  What do others think or say about you when your name comes up?

Although this chapter glosses over the downfall of Solomon it speaks toward his reputation.  The Queen of Sheba traveled some 1500 miles to see if what she heard was true of Solomon, the kingdom and all of its glory.  She had heard of his wisdom and wanted to test and discover for herself if these things were true.  She was not disappointed.

The fascinating twist to consider is simply the Queen’s interest drove her to go and see for herself.  As our reputation goes before us, it is what will either drive or repel others.  For those seeking Christ, who we are by reputation is what first opens the door or closes any further discussion.  She traveled to him bringing gifts.  She came with questions and sat and spoke of things at great length.  Eventually, she told what was in her heart.

She was a seeker on a mission to discover for herself.  We are surrounded by so many who are lost or struggling.  Does our own reputation open the door for conversations and the Light of Jesus to be shone into their darkness?

Jesus actually spoke of this encounter between the Queen of Sheba and Solomon. In Matthew 12 the teachers of the Law and Pharisees question Jesus’ authority and they demand a sign. Technically, they ask Him to perform a miracle. Jesus takes offense to the question, and rightly so. He goes on to answer their question with an illustration about Jonah.

The city of Nineveh was known as a treacherous place of pagan worship. After Jonah’s encounter with the whale, he eventually lands there to preach a message of repentance to the people. Incredibly, they repent. Although being pagans, they listen to the prophet Jonah and decide to change their ways. Then Jesus goes right into another analogy using Solomon from this chapter in 2 Chronicles.

“The Queen of the South will rise up with this generation at the judgment and will condemn it, because she came from the ends of the earth to hear the wisdom of Solomon; and behold, something greater than Solomon is here.”

So if pagans can turn from their sin through a prophet and a wealthy Queen can travel 1500 miles to hear from a wise man, why can’t the Pharisees believe? Furthermore, why can’t they believe when Jesus in the flesh stands before them. Jesus was obviously greater than the prophet Jonah and wiser than King Solomon, yet, the Pharisees still demanded a sign.

Jesus has given an incredible and thought-provoking backdrop for the consideration of His authority. In the past, God used prophets and wise men (along with priests as well) to make His Kingdom known to all people. If something greater is now present, and if prophetic wisdom now stands before them in the flesh, then to what degree have they been blinded?

In other words, the only sign needed is the death and resurrection. Let that sink in for a moment. It’s not historical evidence or extra-biblical documentation. It’s not apologetics or crazy signs and wonders. By the grace of God, He has given us those things as supplemental assurance. However, the only truly convincing sign is found in Jesus’ death and resurrection. It’s the only one Jesus cared about.

Today, I see Christians who try to cater to the unbeliever with all different types of convincing “signs.” The skeptical world looks at us and demands a sign and we scramble around to try and give them the right answer. The truth is that their answer is right in front of them. It’s foundational Biblical truth. It’s the cornerstone of our faith. It’s found in Jesus alone.