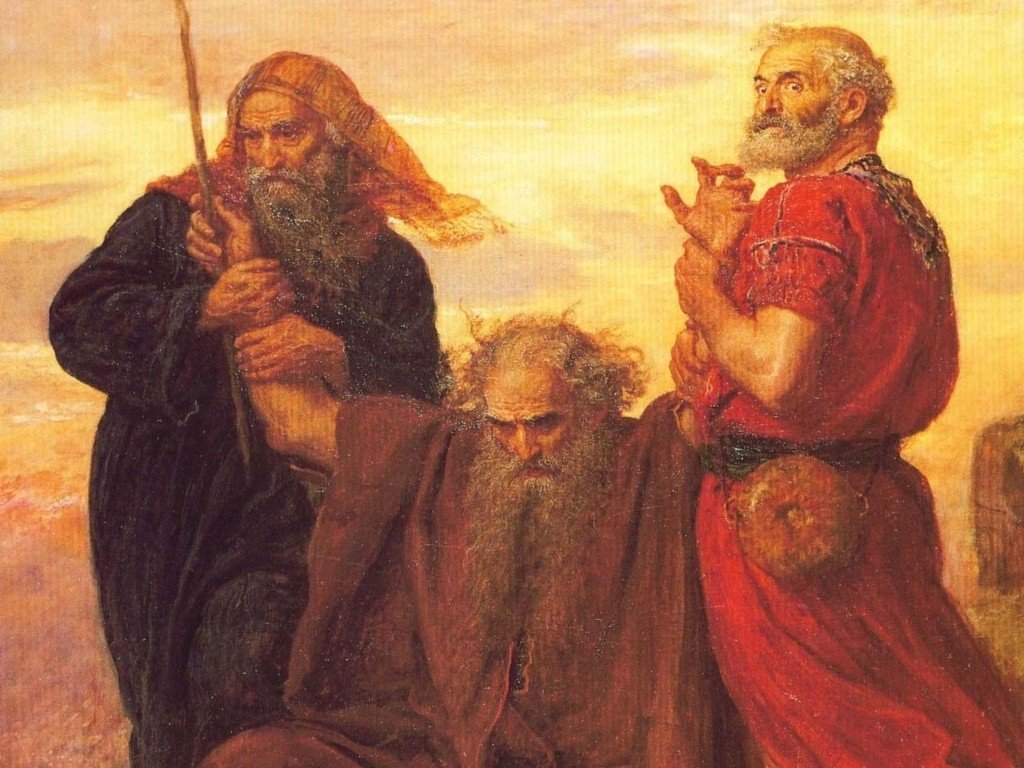 Water from the Rock

17 All the congregation of the people of Israel moved on from the wilderness of Sin by stages, according to the commandment of the LORD, and camped at Rephidim, but there was no water for the people to drink. Therefore the people quarreled with Moses and said, “Give us water to drink.” And Moses said to them, “Why do you quarrel with me? Why do you test the LORD?” But the people thirsted there for water, and the people grumbled against Moses and said, “Why did you bring us up out of Egypt, to kill us and our children and our livestock with thirst?” So Moses cried to the LORD, “What shall I do with this people? They are almost ready to stone me.” And the LORD said to Moses, “Pass on before the people, taking with you some of the elders of Israel, and take in your hand the staff with which you struck the Nile, and go. Behold, I will stand before you there on the rock at Horeb, and you shall strike the rock, and water shall come out of it, and the people will drink.” And Moses did so, in the sight of the elders of Israel. And he called the name of the place Massah and Meribah, because of the quarreling of the people of Israel, and because they tested the LORD by saying, “Is the LORD among us or not?”

Then Amalek came and fought with Israel at Rephidim. So Moses said to Joshua, “Choose for us men, and go out and fight with Amalek. Tomorrow I will stand on the top of the hill with the staff of God in my hand.” So Joshua did as Moses told him, and fought with Amalek, while Moses, Aaron, and Hur went up to the top of the hill. Whenever Moses held up his hand, Israel prevailed, and whenever he lowered his hand, Amalek prevailed. But Moses’ hands grew weary, so they took a stone and put it under him, and he sat on it, while Aaron and Hur held up his hands, one on one side, and the other on the other side. So his hands were steady until the going down of the sun. And Joshua overwhelmed Amalek and his people with the sword.

Then the LORD said to Moses, “Write this as a memorial in a book and recite it in the ears of Joshua, that I will utterly blot out the memory of Amalek from under heaven.” And Moses built an altar and called the name of it, The LORD Is My Banner, saying, “A hand upon the throne of the LORD! The LORD will have war with Amalek from generation to generation.”

It is possible to be in the will of God and yet be riddled with problems.

Israel was on track exactly where they needed to be.  They were in His will but problems came and one very natural need was that of water.  They had every right reason to be concerned.  If they didn’t get water they would eventually die.  However, even though the Israelite’s were in the will of God in their location, their attitudes and the way they responded to the situation was completely their human nature.  And crazily, they demanded Moses to make the miracle happen.

It really goes without saying that many times we’re pretty quick to blame another person for whatever state we find ourselves.  And although they may be in the leadership over us, they may not have the power to answer our need fully.  Another fact is even when there are problems, if we aren’t willing to help, get involved, try to help solve the issue and merely blame – we are wrong.  This would be the case again and again for the Israelite’s.  Quick to complain, lax in helping.

The testing of Israel in this moment of course was working on them.   But it also was working on Moses.  We’ve seen him come a long way through his journey so far.  What becomes ever more apparent is he continues to go before God for help.  This testing of the people had a side benefit of driving Moses himself to God.  But there was more.

Moses had to go before the people.  That may not sound like a huge ordeal but let’s get real.  Sometimes when problems come our way the last thing we want to do is deal with the ones who are complaining.  The last thing we want to do is face these who are not doing their job or not fulfilling their promises.  We would rather run and avoid.  The reality was Moses was their leader and this was a moment of his own leadership required him to face the difficult situation and people.  As leader we often do the same but part of leadership is leading.

God gave instructions that seemed on the fantastical as to how an answer would come.  Moses had to trust God’s words and boldly do what was instructed.  He had to boldly and confidently lead for God was with him.  The result was the miraculous water coming from a rock.

It is possible to be in the will of God yet riddled with problems.  What is God trying to do in you through such a place?

The team was assembled and ready to go! Joshua would lead the army into battle. This is the first we’ve heard of Joshua but, of course, it wouldn’t be the last. His training here on the battlefield would suit him well as he would later lead Israel into the Promised Land in Canaan. In this way, Joshua was being groomed for leadership.

At this point in their history, God was teaching them that by His power, their enemies could be defeated. Israel was anything but a powerful military force by human standards, however, they had the Lord to fight their battles. Joshua would get trained on the practicals of war while also getting trained on the necessity of relying on God.

Many are quick to assume that God had given Moses a “magic wand” but this was not the case. The staff of Moses came to represent God’s personal and powerful involvement in all of Israel’s struggles.  As the warriors looked up to Moses on the hilltop, they would either see his arms outstretched toward the heavens, or drooping with fatigue.

The symbolism is thick. Moses was God’s chosen leader and victory would come through his obedience (and Israel’s submission to him).  The people are fresh off a Moses-bashing party that threatened his life. God reestablished that Moses was his main man.

God also established that the victory would only be found through Him. The warriors could not do it alone – they had to trust the outstretched arms of victory. Isn’t this similar to the way we fight our battles today? In trying times of absolute need, we reach up to the heavens declaring that we cannot do it alone.

Raising your arms is not a prideful show of yourself but a submissive act of giving everything over to Him. In this way, Moses was giving the battle over to the Lord and reminding the people that it was only through His strength that triumph would be felt.

Alongside Moses were Aaron and Hur who helped him to hold his arms even when he had lost his strength. Similarly, we need our church family to lift us up when we lose hope and momentum. Overall, this story is such a great example of how we are not called to fight the battle alone. It was a joint effort that harmoniously credited the Lord with all power and glory. The same should be true for us today.