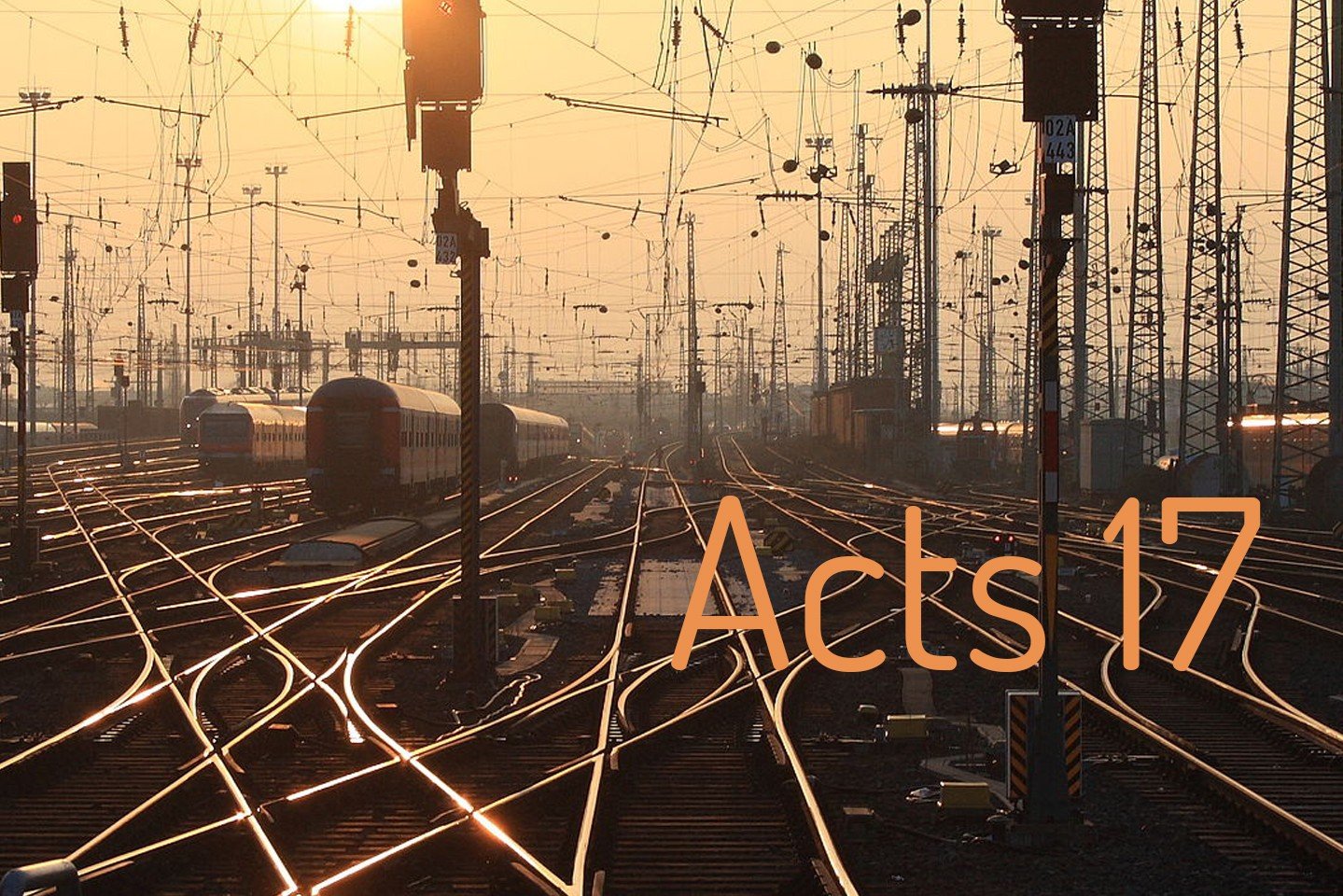 Paul and Silas in Thessalonica

17 Now when they had passed through Amphipolis and Apollonia, they came to Thessalonica, where there was a synagogue of the Jews. And Paul went in, as was his custom, and on three Sabbath days he reasoned with them from the Scriptures, explaining and proving that it was necessary for the Christ to suffer and to rise from the dead, and saying, “This Jesus, whom I proclaim to you, is the Christ.” And some of them were persuaded and joined Paul and Silas, as did a great many of the devout Greeks and not a few of the leading women. But the Jews were jealous, and taking some wicked men of the rabble, they formed a mob, set the city in an uproar, and attacked the house of Jason, seeking to bring them out to the crowd. And when they could not find them, they dragged Jason and some of the brothers before the city authorities, shouting, “These men who have turned the world upside down have come here also, and Jason has received them, and they are all acting against the decrees of Caesar, saying that there is another king, Jesus.” And the people and the city authorities were disturbed when they heard these things. And when they had taken money as security from Jason and the rest, they let them go.

Paul and Silas in Berea

The brothers immediately sent Paul and Silas away by night to Berea, and when they arrived they went into the Jewish synagogue. Now these Jews were more noble than those in Thessalonica; they received the word with all eagerness, examining the Scriptures daily to see if these things were so. Many of them therefore believed, with not a few Greek women of high standing as well as men. But when the Jews from Thessalonica learned that the word of God was proclaimed by Paul at Berea also, they came there too, agitating and stirring up the crowds. Then the brothers immediately sent Paul off on his way to the sea, but Silas and Timothy remained there. Those who conducted Paul brought him as far as Athens, and after receiving a command for Silas and Timothy to come to him as soon as possible, they departed.

Now while Paul was waiting for them at Athens, his spirit was provoked within him as he saw that the city was full of idols. So he reasoned in the synagogue with the Jews and the devout persons, and in the marketplace every day with those who happened to be there. Some of the Epicurean and Stoic philosophers also conversed with him. And some said, “What does this babbler wish to say?” Others said, “He seems to be a preacher of foreign divinities”—because he was preaching Jesus and the resurrection. And they took him and brought him to the Areopagus, saying, “May we know what this new teaching is that you are presenting? For you bring some strange things to our ears. We wish to know therefore what these things mean.” Now all the Athenians and the foreigners who lived there would spend their time in nothing except telling or hearing something new.

So Paul, standing in the midst of the Areopagus, said: “Men of Athens, I perceive that in every way you are very religious. For as I passed along and observed the objects of your worship, I found also an altar with this inscription: ‘To the unknown god.’ What therefore you worship as unknown, this I proclaim to you. The God who made the world and everything in it, being Lord of heaven and earth, does not live in temples made by man, nor is he served by human hands, as though he needed anything, since he himself gives to all mankind life and breath and everything. And he made from one man every nation of mankind to live on all the face of the earth, having determined allotted periods and the boundaries of their dwelling place, that they should seek God, and perhaps feel their way toward him and find him. Yet he is actually not far from each one of us, for

“‘In him we live and move and have our being’;

as even some of your own poets have said,

“‘For we are indeed his offspring.’

Being then God’s offspring, we ought not to think that the divine being is like gold or silver or stone, an image formed by the art and imagination of man. The times of ignorance God overlooked, but now he commands all people everywhere to repent, because he has fixed a day on which he will judge the world in righteousness by a man whom he has appointed; and of this he has given assurance to all by raising him from the dead.”

Now when they heard of the resurrection of the dead, some mocked. But others said, “We will hear you again about this.” So Paul went out from their midst. But some men joined him and believed, among whom also were Dionysius the Areopagite and a woman named Damaris and others with them.

What we need in this church are some troublemakers.  What?  Seriously.  Just hear me out.  We need some troublemakers.  For this is what the enemies of the church in Thessalonica called Paul, Silas and Timothy.  They said they were “causing trouble all over the world.”  These men with their powerful message were world changers.

They took a world that was tired, troubled and searching, tangled and tripped up and put it right back on it’s feet with the foundation of Jesus.

These people knew they had the answer and it was Jesus.  There would be no stopping them going forward and reaching those lost around them.  Wherever they found themselves.  They had not only experienced the things they proclaimed but greatly desired for others to have that same experience.

How burdened are you for the people that surround you?  How much are you actually praying for the lost and then acting upon the lead of the Holy Spirit?  How willing are you to go forward and be what they need?

Arriving in the city, Paul did what he always did when he got to Thessalonica – he went to the temple to talk.  He went on mission. He wanted to see the people that were at the very least religious if not seeking.  The point – he went to where the people were.

It is never the responsibility of others to come to us… it is our responsibility to go to them.  As after this city he moved onto Athens he went once again to where the people gathered at the marketplace.  He went into everyday places.  He looked for opportunities and grabbed them.

The passage tells us he stayed for 3 weeks.  A large number of people believed.  Paul may not have been there long but it was effective.   They were transformed through their faith in Christ, living lives of integrity and the people simply didn’t know how to react except through violence.  The rabble-rousers turned against them, seeking them out and went to where they were staying.  And that is where these people attacked and called them troublemakers.  These troublemakers were causing trouble in the world.  They were doing something that had been forgotten in that pagan culture.

Yet, here’s the beauty.  In years to follow these Believer’s in the city also grabbed hold of the same mission with the same intensity.  In Paul’s first letter to that church which was established he wrote:

“For the word of the Lord has sounded forth from you, not only in Macedonia and Achaia, but also in every place your faith toward God has gone forth, so that we have no need to say anything.” – 1 Thessalonians 1:8

These people heard the message of Jesus, responded and developed a reputation that went everywhere.  It was an intensity to follow Jesus.

It is time for all of us to get out of the armchair and enter into the realm of purposely seeking the lost, purposely living before them a life of transformation and become a troublemaker.  Be on point.  Serve and love with determination.

It’s interesting to ponder how each person responds to the Gospel differently. Some, who we think will understand, (the Jews in Paul’s case) and really SHOULD understand, end up being the most hostile and resistant. Others, however, are surprisingly open. Their attitude surpasses our expectations. We see this in Paul’s case as well. But, just like the parable of the sower, the seed that’s sown shows no discrimination or favor. It’s freely given to all and always dependant on the soil.

The second observation is that Paul’s message doesn’t change. It doesn’t matter who his audience is, or how they react. He is loyal to the message until The Spirit prompts him to leave, or, in some cases, flee for his life. He does not cater the message to certain types of people, but he does become all things to all men in order to deliver that consistent message. Sometimes it’s hard to be confident in the message when people laugh, mock, or walk away. I’m sure Paul experienced this continually. But he was not discouraged. He led those who followed and moved to the next group of people.

Paul was so persistent with his relational ministry as he moved from place to place and made a PERSONAL appeal to each people group he spoke to. He was direct and truthful, but graceful and relevant. As we look at our own lives, are we concerned when people don’t respond the way we expected? Do we back off too quickly, or stay in the same place too long? Are we discouraged by people’s negative reactions when we speak out about our faith? Paul’s actions in this chapter set the example of how we should strive to consistently deliver the Gospel to all people, no matter their response or reactions.