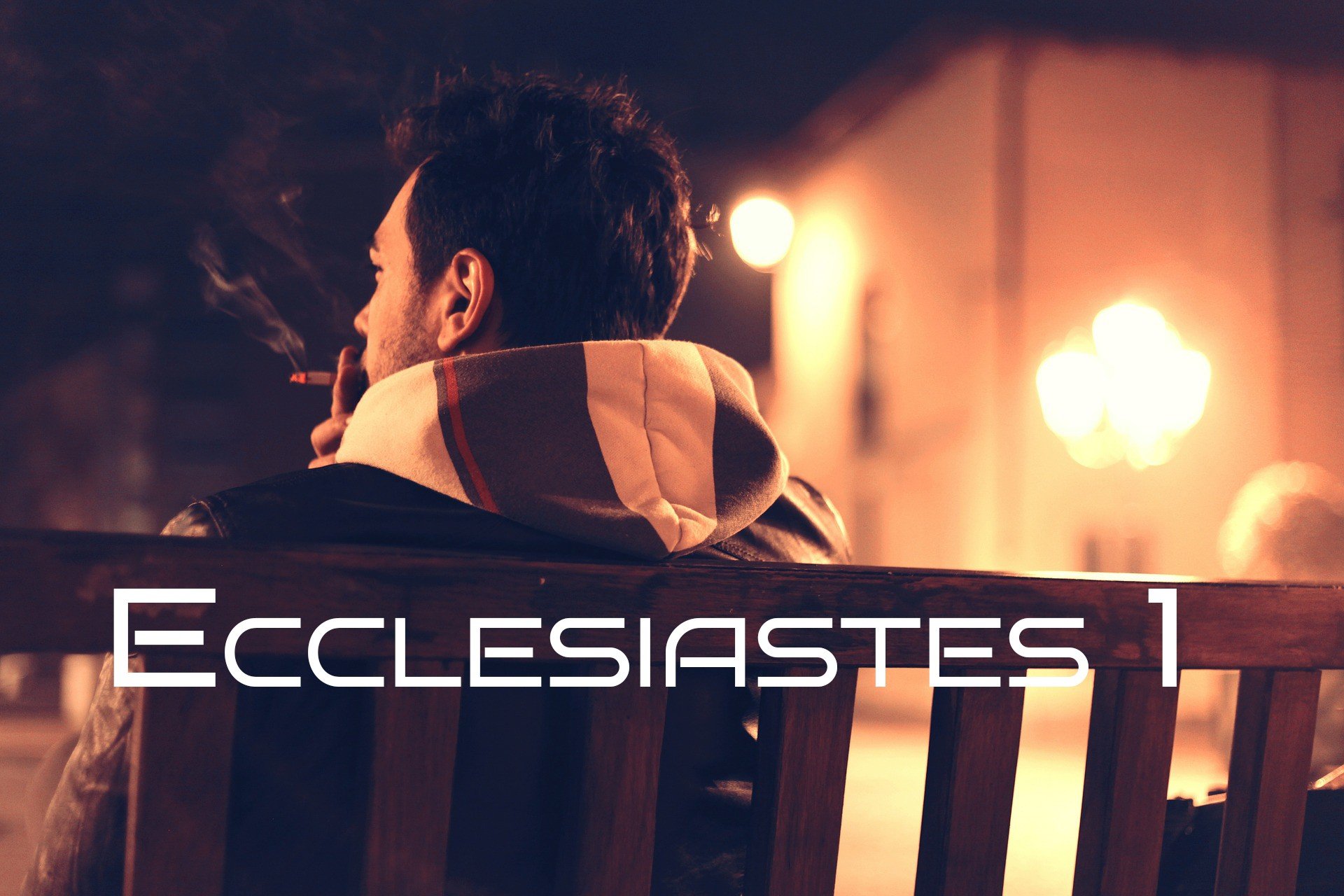 1 The words of the Preacher, the son of David, king in Jerusalem.

Vanity of vanities, says the Preacher,
vanity of vanities! All is vanity.
What does man gain by all the toil
at which he toils under the sun?
A generation goes, and a generation comes,
but the earth remains forever.
The sun rises, and the sun goes down,
and hastens to the place where it rises.
The wind blows to the south
and goes around to the north;
around and around goes the wind,
and on its circuits the wind returns.
All streams run to the sea,
but the sea is not full;
to the place where the streams flow,
there they flow again.
All things are full of weariness;
a man cannot utter it;
the eye is not satisfied with seeing,
nor the ear filled with hearing.
What has been is what will be,
and what has been done is what will be done,
and there is nothing new under the sun.
Is there a thing of which it is said,
“See, this is new”?
It has been already
in the ages before us.
There is no remembrance of former things,
nor will there be any remembrance
of later things yet to be
among those who come after.

The Vanity of Wisdom

I the Preacher have been king over Israel in Jerusalem. And I applied my heart to seek and to search out by wisdom all that is done under heaven. It is an unhappy business that God has given to the children of man to be busy with. I have seen everything that is done under the sun, and behold, all is vanity and a striving after wind.

What is crooked cannot be made straight,
and what is lacking cannot be counted.

I said in my heart, “I have acquired great wisdom, surpassing all who were over Jerusalem before me, and my heart has had great experience of wisdom and knowledge.” And I applied my heart to know wisdom and to know madness and folly. I perceived that this also is but a striving after wind.

For in much wisdom is much vexation,
and he who increases knowledge increases sorrow.

Written over 3000 years ago, much of the message of Ecclesiastes still resonates. Pursuing things, people, objects, power and pleasure bring nothing more than emptiness. It’s the ongoing dilemma humankind has faced since the garden. This is Solomon’s written words of emptiness found in pursuit of anything but God. A king who ruled during the Golden Age of Israel, he had been given much.

Wisdom, discernment, riches and physical pleasures were at his beck and call. Yet, he remained disillusioned by their hollowness. Although he was gifted by God with everything imaginable, he would fail to even heed his own advice. He sought after the world and forgot God. It would not be until later in his years where he would take a hard look at himself and all he had experienced where the regret and bitterness of his pursuits had brought nothing.

Solomon hits life very honestly and straightforward. His purpose is speaking toward the reality that pursuing anything but God is empty. In light of eternity, the things we are investing of in this world hoping to find purpose bring futility.

Many of us go through periods of questioning. We look at life and where we find ourselves and wonder if it all matters. There is a restlessness that often we wrestle with which is a result of the emptiness of ways. The Holy Spirit uses these things to bring many things to light. As verses 8-11 proclaim, there is nothing new under the sun. The traps of life catch us over and over again. The spotlight of Solomon’s words point out that true meaning and purpose is found solely in God.

Maybe this book will cause all of us to consider where we are, how fulfilled we’ve become and seek true purpose in serving Him and Him alone.

The Bible quite often emphasizes its main point by using a common Hebrew superlative. We see this in Song of Songs which literally means “the loveliest of songs.” We see it with the description of Jesus being the “King of Kings” and “Lord of Lords.” We also read it when the innermost part of the temple is described as being the “Holy of Holies.” There are things that are true and then there are things that are the truest.

The book of Ecclesiastes opens with this same superlative immediately in verse 2. Life itself is “vanity of vanities.” It is the ultimate in absurd emptiness. However, it is extremely important to define the use of the word vanity in this context. Many have speculated that Ecclesiastes describes life as meaningless but that is not totally accurate. It certainly would not be consistent with the rest of Scripture to call our lives completely meaningless.

Vanity is translated from the Hebrew word hâbal. Its definition means emptiness, vapor, or to be led astray. In this sense, we can understand that investing in life itself only leads to an empty path that is quickly passing away. You can’t take your money. You can’t take your possessions. Life is fragile and you are finite. The word vanity occurs 38 times in this book and it paints a picture that is consistent with life experiences.

Solomon was granted great wisdom by God. To use the same superlative we have discussed, he could be described among mortals as the “wisest of wise.” But this wisdom came with a price. He not only experienced the joys of wisdom, but he also began to understand the source of all pain and suffering.

In many ways, he experienced the same revelation that occurred with Adam and Eve when they sinned and discovered the knowledge of good and evil. This is the desire of humanity. We want to increase in wisdom in knowledge though we don’t understand the frightening reality that awaits on the other side. Solomon expresses this thought at the end of chapter 1.

Because in much wisdom there is much grief, and increasing knowledge results in increasing pain.

His expectation of increasing his knowledge and wisdom was complete satisfaction. Though he definitely found positive aspects of this increase, he was sorely disappointed with the overall results.  The phrase here in Ecclesiastes contrasts with the book of Proverbs which describes wisdom as providing joy and fulfillment. This is the double-edged sword that Solomon experienced. Life experiences validate what both of these books teach. Knowledge can bring both joy and increasing pain.

There have been times in my life I have prayed for God to show me the needs around me. I have prayed that He would give me more of His heart. Sometimes He answers those prayers by directing my attention to the latest news headline in which the gravity of pure evil becomes even more of a reality.

The temptation is to resist this deep pain and anguish. We may initially respond by wishing we could jump back into our ignorant mindset. But God has placed burdens on us because we, as His children, have been transformed by His Holy Spirit. We know the meaning of life. We feast on living bread and living water in the divine nature of Jesus Christ and we live for a Kingdom that transcends this world.

So, let us continue to embrace wisdom while knowing and understanding that pain and suffering will come. To intentionally embrace those without an answer is absurdity and vanity. To embrace them with Jesus is exactly what we’ve been called to do.