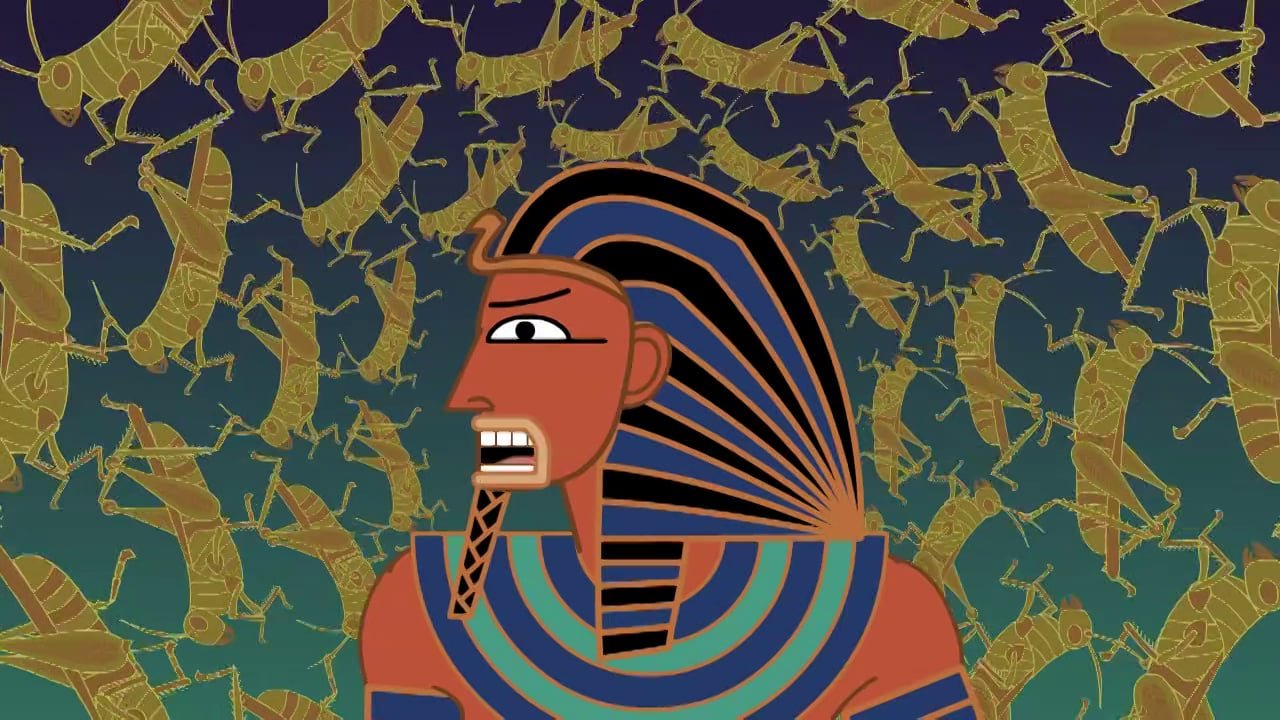 10 Then the LORD said to Moses, “Go in to Pharaoh, for I have hardened his heart and the heart of his servants, that I may show these signs of mine among them, and that you may tell in the hearing of your son and of your grandson how I have dealt harshly with the Egyptians and what signs I have done among them, that you may know that I am the LORD.”

So Moses and Aaron went in to Pharaoh and said to him, “Thus says the LORD, the God of the Hebrews, ‘How long will you refuse to humble yourself before me? Let my people go, that they may serve me. For if you refuse to let my people go, behold, tomorrow I will bring locusts into your country, and they shall cover the face of the land, so that no one can see the land. And they shall eat what is left to you after the hail, and they shall eat every tree of yours that grows in the field, and they shall fill your houses and the houses of all your servants and of all the Egyptians, as neither your fathers nor your grandfathers have seen, from the day they came on earth to this day.’” Then he turned and went out from Pharaoh.

Then Pharaoh’s servants said to him, “How long shall this man be a snare to us? Let the men go, that they may serve the LORD their God. Do you not yet understand that Egypt is ruined?” So Moses and Aaron were brought back to Pharaoh. And he said to them, “Go, serve the LORD your God. But which ones are to go?” Moses said, “We will go with our young and our old. We will go with our sons and daughters and with our flocks and herds, for we must hold a feast to the LORD.” But he said to them, “The LORD be with you, if ever I let you and your little ones go! Look, you have some evil purpose in mind. No! Go, the men among you, and serve the LORD, for that is what you are asking.” And they were driven out from Pharaoh’s presence.

Then the LORD said to Moses, “Stretch out your hand over the land of Egypt for the locusts, so that they may come upon the land of Egypt and eat every plant in the land, all that the hail has left.” So Moses stretched out his staff over the land of Egypt, and the LORD brought an east wind upon the land all that day and all that night. When it was morning, the east wind had brought the locusts. The locusts came up over all the land of Egypt and settled on the whole country of Egypt, such a dense swarm of locusts as had never been before, nor ever will be again. They covered the face of the whole land, so that the land was darkened, and they ate all the plants in the land and all the fruit of the trees that the hail had left. Not a green thing remained, neither tree nor plant of the field, through all the land of Egypt. Then Pharaoh hastily called Moses and Aaron and said, “I have sinned against the LORD your God, and against you. Now therefore, forgive my sin, please, only this once, and plead with the LORD your God only to remove this death from me.” So he went out from Pharaoh and pleaded with the LORD. And the LORD turned the wind into a very strong west wind, which lifted the locusts and drove them into the Red Sea. Not a single locust was left in all the country of Egypt. But the LORD hardened Pharaoh’s heart, and he did not let the people of Israel go.

Then the LORD said to Moses, “Stretch out your hand toward heaven, that there may be darkness over the land of Egypt, a darkness to be felt.” So Moses stretched out his hand toward heaven, and there was pitch darkness in all the land of Egypt three days. They did not see one another, nor did anyone rise from his place for three days, but all the people of Israel had light where they lived. Then Pharaoh called Moses and said, “Go, serve the LORD; your little ones also may go with you; only let your flocks and your herds remain behind.” But Moses said, “You must also let us have sacrifices and burnt offerings, that we may sacrifice to the LORD our God. Our livestock also must go with us; not a hoof shall be left behind, for we must take of them to serve the LORD our God, and we do not know with what we must serve the LORD until we arrive there.” But the LORD hardened Pharaoh’s heart, and he would not let them go. Then Pharaoh said to him, “Get away from me; take care never to see my face again, for on the day you see my face you shall die.” Moses said, “As you say! I will not see your face again.”

The continued hardening of Pharaoh’s heart had also blinded him to the living God.  Destruction beyond what was even imagined had come in waves.  As the plagues grew in number and devastation, he asked for intercession from Moses to have relief then would turn back to his stubbornness.  He flat out refused to recognize the power of the God of Jacob whom Moses represented.

The irony is even the people of Egypt were beginning to realize how powerless they were and how their own gods could not stop what kept coming.  Egypt was inundated with gods of whom they worshiped.  They had a god for everything.  Just a few of these smack at the impotence their gods had as God revealed His all encompassing power.

These 3 examples alone smacked them in the face of the powerless they truly were.  And they still didn’t get it.

There is something that takes place when we harden our hearts to God.  Much like this with Pharaoh, our spiritual eyes grow dim.  We fail to recognize the absolute work of God around us.  We neglect through our own rock-hard stone heart of the movement of God.  It’s quite baffling to observe those we know who have seen God work so tremendously in some situation or even in their lives but they fail to grasp the fullness of it.

This is scary territory.  It’s one thing to be disobedient.  It’s quite another to simply harden ourselves to the voice of God and His calling.  Disobedience is something God certainly is use to with all of us.  But for most, we may be resistant to what He’s asking, plow in our feet but through the power of the Holy Spirit, our hearts being sensitive, we will turn back as our conscious is pricked to do what He asks.  The hardening of our hearts is a slow progression of disobedience with no repenting.  In time I think although the Spirit is still calling us, we simply don’t hear him anymore.

In verse 3, Moses asks Pharaoh how long he will go before humbling himself. This seems to be a contrast to the many verses thus far which have outlined God’s hardening of Pharaoh’s heart.

Although Scripture is clear that God gives us up to our natural desires at times, this does not negate the personal responsibility we have to respond to situations with repentance. We see both God’s will accomplished as well as His grace being given. The opportunity for Pharaoh to repent was a gift from God.

Verse 14 tells us that this locust swarm was greater than anything Egypt had seen (or would ever see again). It was foreign to them, and most likely a much greater shock than the previous plagues. Locust invasions were feared in Egypt to the point of farmers praying to the ‘locust god’ in order to protect their crops. After this plague, there was nothing green left in their fields.

If the locust plague struck fear into the Egyptians, the ninth plague of darkness completely humiliated them. As Hank mentioned, Amon-Re was the sun god and highly exalted by their culture. By striking darkness into the land, God had destroyed the heart and soul of their false religion. Their worldview was demolished, and the true and only God was glorified.

God does the same today. He will destroy our worldview to proclaim His glory. Even in our hard-hearted nature, He will come to us in grace with opportunities to repent. He gives us overwhelming evidence in the physical world, our minds and our hearts that draw us toward His truth.