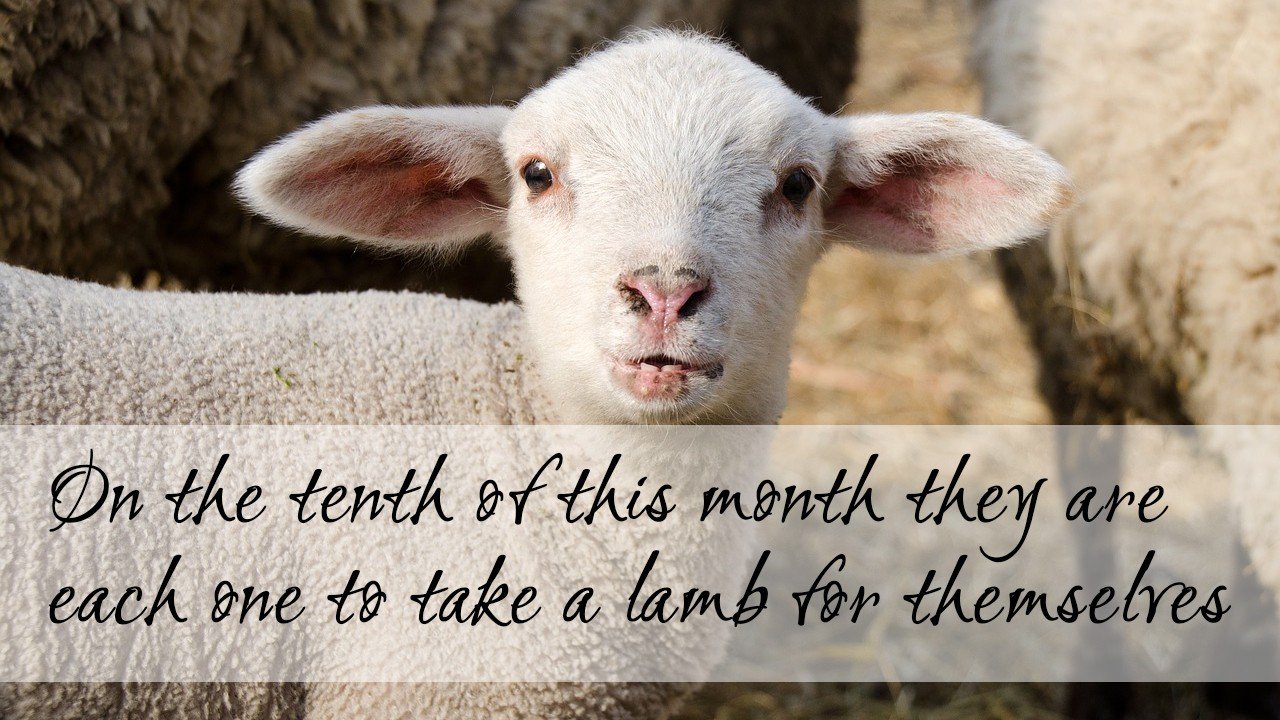 12 The LORD said to Moses and Aaron in the land of Egypt, “This month shall be for you the beginning of months. It shall be the first month of the year for you. Tell all the congregation of Israel that on the tenth day of this month every man shall take a lamb according to their fathers’ houses, a lamb for a household. And if the household is too small for a lamb, then he and his nearest neighbor shall take according to the number of persons; according to what each can eat you shall make your count for the lamb. Your lamb shall be without blemish, a male a year old. You may take it from the sheep or from the goats, and you shall keep it until the fourteenth day of this month, when the whole assembly of the congregation of Israel shall kill their lambs at twilight.

“Then they shall take some of the blood and put it on the two doorposts and the lintel of the houses in which they eat it. They shall eat the flesh that night, roasted on the fire; with unleavened bread and bitter herbs they shall eat it. Do not eat any of it raw or boiled in water, but roasted, its head with its legs and its inner parts. And you shall let none of it remain until the morning; anything that remains until the morning you shall burn. In this manner you shall eat it: with your belt fastened, your sandals on your feet, and your staff in your hand. And you shall eat it in haste. It is the LORD’s Passover. For I will pass through the land of Egypt that night, and I will strike all the firstborn in the land of Egypt, both man and beast; and on all the gods of Egypt I will execute judgments: I am the LORD. The blood shall be a sign for you, on the houses where you are. And when I see the blood, I will pass over you, and no plague will befall you to destroy you, when I strike the land of Egypt.

Then Moses called all the elders of Israel and said to them, “Go and select lambs for yourselves according to your clans, and kill the Passover lamb. Take a bunch of hyssop and dip it in the blood that is in the basin, and touch the lintel and the two doorposts with the blood that is in the basin. None of you shall go out of the door of his house until the morning. For the LORD will pass through to strike the Egyptians, and when he sees the blood on the lintel and on the two doorposts, the LORD will pass over the door and will not allow the destroyer to enter your houses to strike you. You shall observe this rite as a statute for you and for your sons forever. And when you come to the land that the LORD will give you, as he has promised, you shall keep this service. And when your children say to you, ‘What do you mean by this service?’ you shall say, ‘It is the sacrifice of the LORD’s Passover, for he passed over the houses of the people of Israel in Egypt, when he struck the Egyptians but spared our houses.’” And the people bowed their heads and worshiped.

Then the people of Israel went and did so; as the LORD had commanded Moses and Aaron, so they did.

The Tenth Plague: Death of the Firstborn

The Egyptians were urgent with the people to send them out of the land in haste. For they said, “We shall all be dead.” So the people took their dough before it was leavened, their kneading bowls being bound up in their cloaks on their shoulders. The people of Israel had also done as Moses told them, for they had asked the Egyptians for silver and gold jewelry and for clothing. And the LORD had given the people favor in the sight of the Egyptians, so that they let them have what they asked. Thus they plundered the Egyptians.

And the people of Israel journeyed from Rameses to Succoth, about six hundred thousand men on foot, besides women and children. A mixed multitude also went up with them, and very much livestock, both flocks and herds. And they baked unleavened cakes of the dough that they had brought out of Egypt, for it was not leavened, because they were thrust out of Egypt and could not wait, nor had they prepared any provisions for themselves.

The time that the people of Israel lived in Egypt was 430 years. At the end of 430 years, on that very day, all the hosts of the LORD went out from the land of Egypt. It was a night of watching by the LORD, to bring them out of the land of Egypt; so this same night is a night of watching kept to the LORD by all the people of Israel throughout their generations.

Institution of the Passover

And the LORD said to Moses and Aaron, “This is the statute of the Passover: no foreigner shall eat of it, but every slave that is bought for money may eat of it after you have circumcised him. No foreigner or hired worker may eat of it. It shall be eaten in one house; you shall not take any of the flesh outside the house, and you shall not break any of its bones. All the congregation of Israel shall keep it. If a stranger shall sojourn with you and would keep the Passover to the LORD, let all his males be circumcised. Then he may come near and keep it; he shall be as a native of the land. But no uncircumcised person shall eat of it. There shall be one law for the native and for the stranger who sojourns among you.”

There are many aspects to the instructions given to the people of Israel as the final act of God’s power was about to hit every household in Egypt.  The Israelite’s were to follow these guidelines fully to be spared.  This obedience was a matter of literal life and death.

As an unblemished lamb was to be sacrificed and the blood painted across the door-frames of each household this would be a sign to God passing over the houses and taking the firstborn of each family. The blood would bring protection.

This was the absolute foreshadowing of Christ’s sacrifice, the perfect Lamb who would take away the sins of the world, when upon acceptance of Him as Savior, His blood is splashed upon the door-frames of our heart.  There is a richness in these instructions as we now see what Jesus has done for each of us.

The Hebrews were not free from their slavery yet.  They were to dress in anticipation of their deliverance.  This was an unwavering faith that they must be ready to walk out from Egypt immediately.

The keeping of the Passover instructions was a complete act in preparation of their faith.  This type of faith acting resonates to each of us.  Preparing ourselves for whatever fulfillment of God’s promises may be personally, even if these things seem unlikely in our own eyes, demonstrates our faith in what God has said, will take place.

Where is God calling you to believe something that seems impossible? Where is He asking you to be ready at any given notice to go forward?  Be “dressed in faith” for what He is about to do.  Be ready for the great movement of Him.  He who promised will bring it about.

The Passover is a powerful event in both Jewish tradition as well as Christianity. One major difference, obviously, is that the Jews rejected Jesus as the Messiah. It’s tradition when the Jews celebrate the Passover that they leave a seat open for Elijah should the prophet come “this year” to proclaim the Messiah’s advent. The main reason they believe this is because of Malachi 4:5.

“Behold, I am going to send you Elijah the prophet before the coming of the great and terrible day of the LORD.

So why do Christians believe that Jesus is the true Messiah if Elijah didn’t come and testify before Him? Because Jesus himself told us exactly who that “Elijah” was. It’s John the Baptist.

“For all the prophets and the Law prophesied until John.  14  “And if you are willing to accept it, John himself is Elijah who was to come.  15  “He who has ears to hear, let him hear.

John came in the spirit and power of Elijah, but he was rejected just like Christ. It’s a deep and confusing controversy, but in the simplest terms, if John would have been accepted and the people would have believed, he would have fulfilled this prophecy of coming as “Elijah.” Jesus touches on this in Mark 9.

And He said to them, “Elijah does first come and restore all things. And yet how is it written of the Son of Man that He will suffer many things and be treated with contempt?  13  “But I say to you that Elijah has indeed come, and they did to him whatever they wished, just as it is written of him.”

So, in summary, since the Jews rejected John and ignored the words of Christ, they hold their Passover meal with a seat for Elijah awaiting their promised Messiah. I personally believe their hearts will be opened at the right time. Paul references the partial hardening of their hearts that comes until the full number of Gentiles are converted.

For I do not want you, brethren, to be uninformed of this mystery – so that you will not be wise in your own estimation – that a partial hardening has happened to Israel until the fullness of the Gentiles has come in;