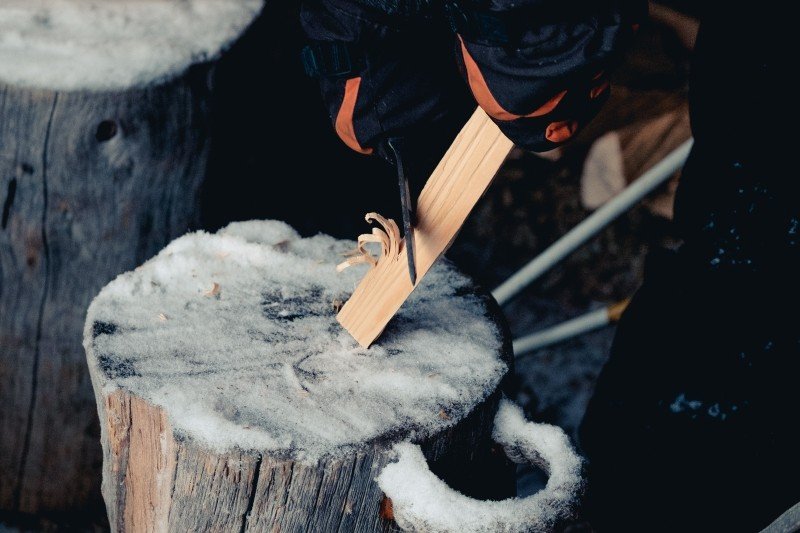 31 The LORD said to Moses, “See, I have called by name Bezalel the son of Uri, son of Hur, of the tribe of Judah, and I have filled him with the Spirit of God, with ability and intelligence, with knowledge and all craftsmanship, to devise artistic designs, to work in gold, silver, and bronze, in cutting stones for setting, and in carving wood, to work in every craft. And behold, I have appointed with him Oholiab, the son of Ahisamach, of the tribe of Dan. And I have given to all able men ability, that they may make all that I have commanded you: the tent of meeting, and the ark of the testimony, and the mercy seat that is on it, and all the furnishings of the tent, the table and its utensils, and the pure lampstand with all its utensils, and the altar of incense, and the altar of burnt offering with all its utensils, and the basin and its stand, and the finely worked garments, the holy garments for Aaron the priest and the garments of his sons, for their service as priests, and the anointing oil and the fragrant incense for the Holy Place. According to all that I have commanded you, they shall do.”

And the LORD said to Moses, “You are to speak to the people of Israel and say, ‘Above all you shall keep my Sabbaths, for this is a sign between me and you throughout your generations, that you may know that I, the LORD, sanctify you. You shall keep the Sabbath, because it is holy for you. Everyone who profanes it shall be put to death. Whoever does any work on it, that soul shall be cut off from among his people. Six days shall work be done, but the seventh day is a Sabbath of solemn rest, holy to the LORD. Whoever does any work on the Sabbath day shall be put to death. Therefore the people of Israel shall keep the Sabbath, observing the Sabbath throughout their generations, as a covenant forever. It is a sign forever between me and the people of Israel that in six days the LORD made heaven and earth, and on the seventh day he rested and was refreshed.’”

And he gave to Moses, when he had finished speaking with him on Mount Sinai, the two tablets of the testimony, tablets of stone, written with the finger of God.

Hebrew tradition Rabbinical literature states he was only 13 years old when he completed his task. But it would be by this age he had done something so significant that most would never dream of completing it in a lifetime – or at least until they were much older.

Bezalel, who was highly gifted and creative was chosen by God as a youngster to tackle the construction of the tent of meeting or the desert Tabernacle for the Israelites, building of the Ark of the Covenant, and also all the construction of the sacred furniture within as well as the priestly garments made to be worn along with the holy oils and incense.  He had many apprentices who worked under him.

Take note of his introduction.  I kept the entire section because it lays out exactly what he was called to do. It’s astounding.  Not only would he head this mission up – he would surround himself with a team of workers, some apprentices who would help accomplish the task.

I think the key to this entire section is the fact God had given Bezalel His Spirit-filled him.  And this cannot be overlooked.  We are all in desperate need daily for the Spirit of God to work and be within us.  When it comes to a task or a calling or a mission, whatever that may look like, it is imperative that we have the Holy Spirit to accomplish what has been asked of each of us.

And there was more He blessed him with.  It was God who gave him wisdom and understanding in all manner of workmanship.  God absolutely supernaturally enabled Bezalel to do the work, the extensive work of the Tabernacle.

Sometimes we get this concept that work with hands, artistic endeavors even or just a gift or something of interest that we’re skilled at.  What this truly reveals is God saw this work as just as spiritual.  Did you hear that?  You who are workers with your hands?  You who are artistically inclined?  He saw the work of Bezalel’s hands as deeply spiritual to complete the task before him.  And He sees and has gifted many of you here with the same.

His completion of the work, hands-on work, was completely dependent on the Holy Spirit’s power as much as the work of Moses and Aaron.

I think the beauty is Bezalel was not simply to do this on his own.  This empowerment was not restricted to just him but as the passage states in verse 6 He had put his wisdom in the hearts of other artists.  God not only raised up a team – each of the workers labor would be blessed and prompted by the Holy Spirit.  And they were to make all that God had commanded of them.

God’s empowerment is not for our own selfish ends.  It’s not for the recognition of others.  Nor is it to build a name for ourselves.  His empowerment on tasks He lays before us is absolutely, always for His glory.

“Whatever you do, do your work heartily, as for the Lord rather than for men, knowing that from the Lord you will receive the reward of the inheritance.  It is the Lord Christ whom you serve.” Colossians 3:23-24

At the end of the chapter, God reminds Israel of the third sign of their covenant – the Sabbath. Overall, these signs were established as a reminder of the great provision of God, and to allow the people to partake in God’s plan for their lives.

The first sign was the rainbow. Although today, the rainbow has been used for all sorts of other signs, the original intention was as a reminder of God’s covenant with Noah and his family. It’s fascinating to consider the fact that the rainbow we see in nature was designed and given by God Himself. I am reminded of His covenant on a day after it has rained but the sun begins to peek through the clouds. This would have been the case after the flood as well.

The second sign was the circumcision. This covenant was made with Abraham and was established to set apart God’s people as His own.

Here, in Exodus 31, we are reminded of the third covenant – the Sabbath. This was a routine established by God that mirrored His Creation account. It was also established as a means to help the Israelites understand that God was their ultimate rest. Throughout the OT, the Jews continually worked every day to come near to God. In creating this rhythm, God was foreshadowing the coming Messiah who would give people rest in their hearts forever.

Each sign was a powerful reminder of God’s provision for His people. The rainbow was given as hope after death. The circumcision was given to begin life. The Sabbath was given to sustain life. The progress of these signs all led to the Messiah who would die, resurrect, and sustain us until His Second Coming.