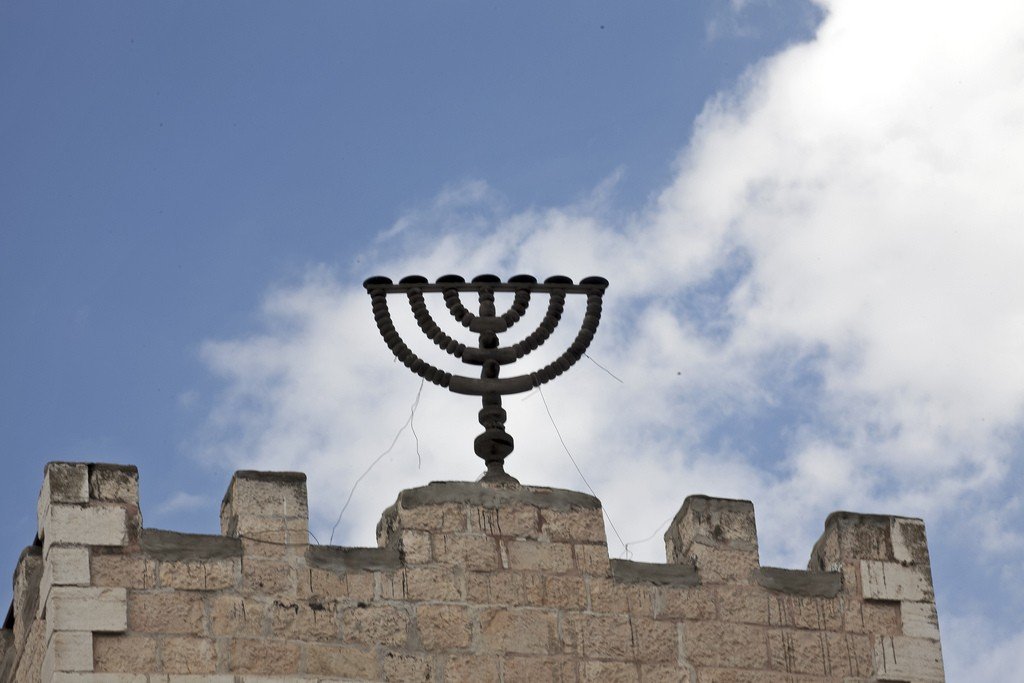 37 Bezalel made the ark of acacia wood. Two cubits and a half was its length, a cubit and a half its breadth, and a cubit and a half its height. And he overlaid it with pure gold inside and outside, and made a molding of gold around it. And he cast for it four rings of gold for its four feet, two rings on its one side and two rings on its other side. And he made poles of acacia wood and overlaid them with gold and put the poles into the rings on the sides of the ark to carry the ark. And he made a mercy seat of pure gold. Two cubits and a half was its length, and a cubit and a half its breadth. And he made two cherubim of gold. He made them of hammered work on the two ends of the mercy seat, one cherub on the one end, and one cherub on the other end. Of one piece with the mercy seat he made the cherubim on its two ends. The cherubim spread out their wings above, overshadowing the mercy seat with their wings, with their faces one to another; toward the mercy seat were the faces of the cherubim.

He also made the table of acacia wood. Two cubits was its length, a cubit its breadth, and a cubit and a half its height. And he overlaid it with pure gold, and made a molding of gold around it. And he made a rim around it a handbreadth wide, and made a molding of gold around the rim. He cast for it four rings of gold and fastened the rings to the four corners at its four legs. Close to the frame were the rings, as holders for the poles to carry the table. He made the poles of acacia wood to carry the table, and overlaid them with gold. And he made the vessels of pure gold that were to be on the table, its plates and dishes for incense, and its bowls and flagons with which to pour drink offerings.

Making the Altar of Incense

He made the altar of incense of acacia wood. Its length was a cubit, and its breadth was a cubit. It was square, and two cubits was its height. Its horns were of one piece with it. He overlaid it with pure gold, its top and around its sides and its horns. And he made a molding of gold around it, and made two rings of gold on it under its molding, on two opposite sides of it, as holders for the poles with which to carry it. And he made the poles of acacia wood and overlaid them with gold.

He made the holy anointing oil also, and the pure fragrant incense, blended as by the perfumer.

There are many key tabernacle pieces listed to be constructed under the direction of God and carried out by Bezalel.  Each had a specific purpose for the Israelites with their worship.

Ark of the Covenant – This was a golden rectangular box that contained the 10 Commandments.  It was a symbol of God’s covenant with Israel’s people.  This was to be located in the Most Holy Place.

Atonement Cover – This is the lid to the Ark.  This symbolized the presence of God among His people.

Curtain – There was to be a heavy curtain that divided the 2 sacred rooms of the Tabernacle.  It separated the Holy Place and the Most Holy Place.  This was a symbol to the people of their sin separating them from God.

Table – A wooden table was located in the Holy Place of the Tabernacle.  The bread of the Presence and various utensils laid upon it.

Bread of the Presence – There were to be 12 loaves of baked bread representing the 12 tribes of Israel placed on the table.  This symbolized the spiritual nourishment God offers to His people.

Altar of Incense – An altar in the Holy Place was in front of the curtain.  This was used for burning God’s special incense and was symbolic of acceptable prayers offered.

Anointing Oil – A special oil was used to anoint the priests and all the pieces in the tabernacle. It was sign of being set apart for God.

Altar of Burning Offering – This bronze altar was located outside the tabernacle and used for sacrifices. It symbolized how sacrifice restored relationships with God.

Basin – A large washbasin outside the tabernacle was placed and used by priests to cleanse themselves before performing their duties.  This symbolized the need for spiritual cleansing.

There is such a richness to this imagery that God wanted the people of Israel to note every time they entered the Tabernacle.  It spoke boldly of God’s deep love for His people, the way for restoration to take place through sacrifice, and ultimately laid before tangible objects which spoke to this.  Thanks be to God that today through Jesus Christ these aspects and symbols are summed up in an empty cross and empty tomb!

Let’s take a moment to briefly summarize what makes this chapter so fruitful. We have the Holy Spirit, working among the people, filling them with gifts to craft together the elements that God had envisioned. We have the Holy Spirit prompting those with resources to fuel the necessary ingredients to produce the final work. We also have the hearts of the people who are stirred by the Spirit and respond in responsible obedience.

There is a lot working in these last two chapters that reiterate the power of spiritual renewal and the effectiveness of responsible obedience. All was accomplished that God had commanded. It goes to show that when we respond to the Spirit’s prompting, we cannot fail. As Jesus Himself said, “apart from me you can do nothing.” Nothing.

By no means does this put the emphasis on human behavior. In fact, as the people essentially failed at nothing, they also added nothing. All that took place was to the glory of God and the prompting through His Spirit. We, as those people who succeed today, should be careful not to step back and admire “our work” instead of giving credit where it is due – to the Lord’s Spirit which testifies to the truth of Christ. He used the people, and they were obedient, but it was all impossible without the Creator. The source of our strength – our Salvation – is only possible because of Jesus Christ.

Do you struggle with this aspect of pride? Are you distracted by your own successes that blind you to the real source of the glory? If we are honest, we’ve all done it. The prayer is to be like the people of this chapter and respond in obedience. If this is you, then in His strength, turn around, and change.