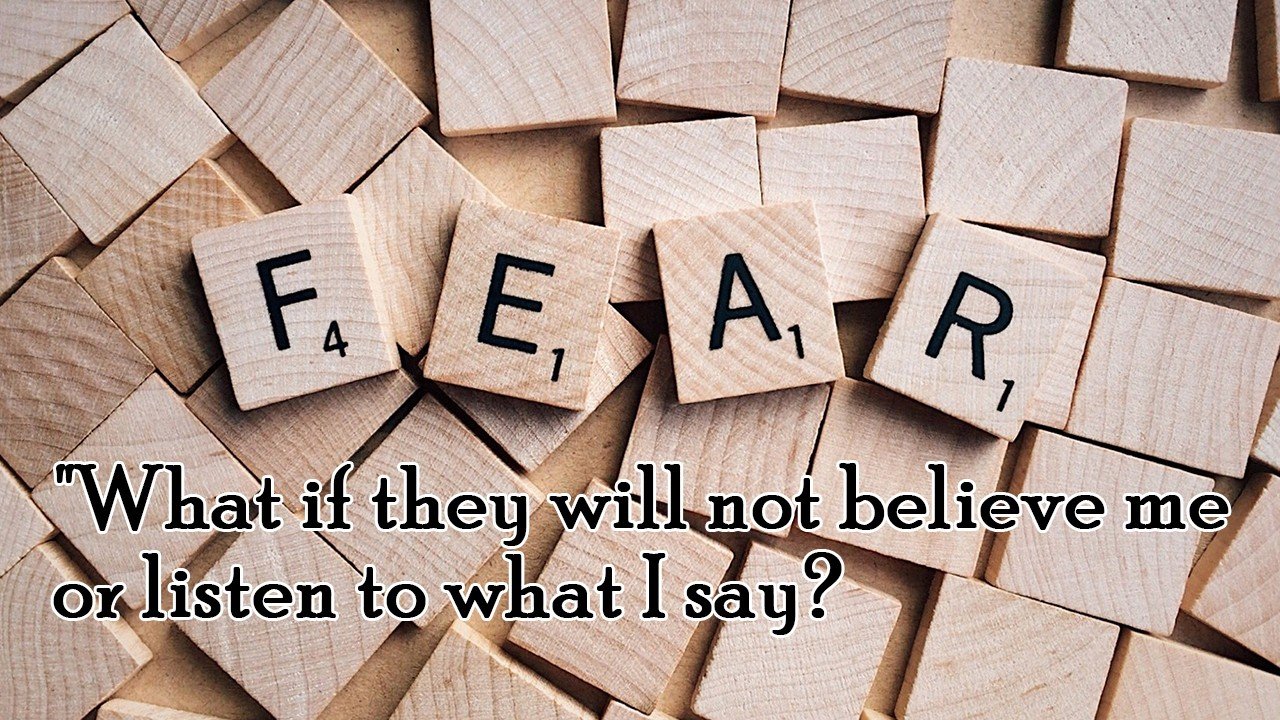 4 Then Moses answered, “But behold, they will not believe me or listen to my voice, for they will say, ‘The LORD did not appear to you.’” The LORD said to him, “What is that in your hand?” He said, “A staff.” And he said, “Throw it on the ground.” So he threw it on the ground, and it became a serpent, and Moses ran from it. But the LORD said to Moses, “Put out your hand and catch it by the tail”—so he put out his hand and caught it, and it became a staff in his hand—“that they may believe that the LORD, the God of their fathers, the God of Abraham, the God of Isaac, and the God of Jacob, has appeared to you.” Again, the LORD said to him, “Put your hand inside your cloak.” And he put his hand inside his cloak, and when he took it out, behold, his hand was leprous like snow. Then God said, “Put your hand back inside your cloak.” So he put his hand back inside his cloak, and when he took it out, behold, it was restored like the rest of his flesh. “If they will not believe you,” God said, “or listen to the first sign, they may believe the latter sign. If they will not believe even these two signs or listen to your voice, you shall take some water from the Nile and pour it on the dry ground, and the water that you shall take from the Nile will become blood on the dry ground.”

But Moses said to the LORD, “Oh, my Lord, I am not eloquent, either in the past or since you have spoken to your servant, but I am slow of speech and of tongue.” Then the LORD said to him, “Who has made man’s mouth? Who makes him mute, or deaf, or seeing, or blind? Is it not I, the LORD? Now therefore go, and I will be with your mouth and teach you what you shall speak.” But he said, “Oh, my Lord, please send someone else.” Then the anger of the LORD was kindled against Moses and he said, “Is there not Aaron, your brother, the Levite? I know that he can speak well. Behold, he is coming out to meet you, and when he sees you, he will be glad in his heart. You shall speak to him and put the words in his mouth, and I will be with your mouth and with his mouth and will teach you both what to do. He shall speak for you to the people, and he shall be your mouth, and you shall be as God to him. And take in your hand this staff, with which you shall do the signs.”

Moses went back to Jethro his father-in-law and said to him, “Please let me go back to my brothers in Egypt to see whether they are still alive.” And Jethro said to Moses, “Go in peace.” And the LORD said to Moses in Midian, “Go back to Egypt, for all the men who were seeking your life are dead.” So Moses took his wife and his sons and had them ride on a donkey, and went back to the land of Egypt. And Moses took the staff of God in his hand.

And the LORD said to Moses, “When you go back to Egypt, see that you do before Pharaoh all the miracles that I have put in your power. But I will harden his heart, so that he will not let the people go. Then you shall say to Pharaoh, ‘Thus says the LORD, Israel is my firstborn son, and I say to you, “Let my son go that he may serve me.” If you refuse to let him go, behold, I will kill your firstborn son.’”

At a lodging place on the way the LORD met him and sought to put him to death. Then Zipporah took a flint and cut off her son’s foreskin and touched Moses’ feet with it and said, “Surely you are a bridegroom of blood to me!” So he let him alone. It was then that she said, “A bridegroom of blood,” because of the circumcision.

The LORD said to Aaron, “Go into the wilderness to meet Moses.” So he went and met him at the mountain of God and kissed him. And Moses told Aaron all the words of the LORD with which he had sent him to speak, and all the signs that he had commanded him to do. Then Moses and Aaron went and gathered together all the elders of the people of Israel. Aaron spoke all the words that the LORD had spoken to Moses and did the signs in the sight of the people. And the people believed; and when they heard that the LORD had visited the people of Israel and that he had seen their affliction, they bowed their heads and worshiped.

Sometimes God calls us back to the very places we have fled or even were delivered from.  Now, hear me out on this.  We who have come to believe in Jesus and are living for Him, the past is something we are to let go of.  We are to walk away from the things that were part of our old nature or previous sinful life.  The aspect of God calling us back to these things would never happen.  But because of the redemption of Jesus that is far reaching – sometimes He sets up meetings or even encounters with things of our past because He still loves these who are lost.

The difference in such a trek back is we must be certain it is God who is calling us there.  More importantly, we must be armed and ready with what God has for us in such an encounter.  For Moses, God equipped him with signs for the encounters he would have.  These miraculous signs was a way God would reveal the power of who He was to this polytheistic land and leadership of Egypt.  But more importantly, God also states He would give Moses the words to say.

We cannot overlook how fearful this would have made Moses.  Not only had he fled there 40 years before, he was a wanted man.  Going back to the place he had fled struck terror down to his core.  He also by his own words, was ‘slow of speech’ and was fearful as well as to how he would be received.

The reality is God doesn’t ask us to go where He’s not provided a means of protection and help for us.  That said, we must always be certain it is God who is bidding us to go there.

For the Believer today, just as God equipped Moses with many aspects of what to say and do – He does the same in our lives.  If we are ever called to go back to something we’ve fled we must be equipped and armed just like Moses was.  For us, we must put on the spiritual armor as we go.  There is a need to have the helmet of salvation placed so tightly guarding our mind.  We need to have the breastplate of righteousness, the shield of faith as we move where God has summoned.

The word of God, the sword of the Spirit, must be picked up and be ready for battle.  We need the belt of truth firmly buckled and the shoes of the Gospel to be on so that where our feet may land, we are bringing the hope of Jesus.  In all of this, we must be in serious, continual prayer – seeking wisdom, discernment and yes, the words of which we are to speak.

If God is leading you back to someone or something that has been long gone, make sure it is He who is bidding the walk back.  Be in deep prayer for clarification and wisdom.  Ask for discernment in this process.  If it is God who is calling you, follow and know He has the details already hammered out.  We simply have the obligation as a soldier of Him to be faithful and suited up in our armor to accomplish what He’s laid before us.

Moses was uncertain about serving God, and his fears represent the same struggles many of us have today. God was asking for Moses to go all in, and his hesitancy can be categorized into four simple questions.

God extends grace and is patient in meeting Moses in his doubts. In the previous chapter, we see these first two questions answered. God promises to come down and be with Moses (and Israel) during their journey. The last two questions are answered here in Exodus 4. Probably the most difficult one that I struggle with (and maybe you do too) is the last one. I’m certain of God’s power, but it’s hard for me to understand how (and why) God would use me despite my struggles.

We know from ancient documents that eloquence was highly regarded in Egyptian culture. Moses would have known this growing up as a young man. He was so insecure about going back to his old territory knowing that he would be considered nothing in their eyes. In many ways, his history in Egypt made it much harder for him to go back. If he had been ignorant to the place where God called him, he may have been more easily convinced.

It is not easy to revisit our past, but many times on our spiritual journey, the Lord will take us back through our junk. It can be debilitating and painful. But He does it to increase our faith and trust while bringing glory to Himself. I know there have been a few times in my life God has taken me exactly where I said I didn’t want to go!

As Christians, we proclaim to follow Christ wherever it may lead. If that means personal humiliation, then so be it. For many in the early church, it meant death. We must trust in the miracle of His work despite whatever impossible task lie before us.