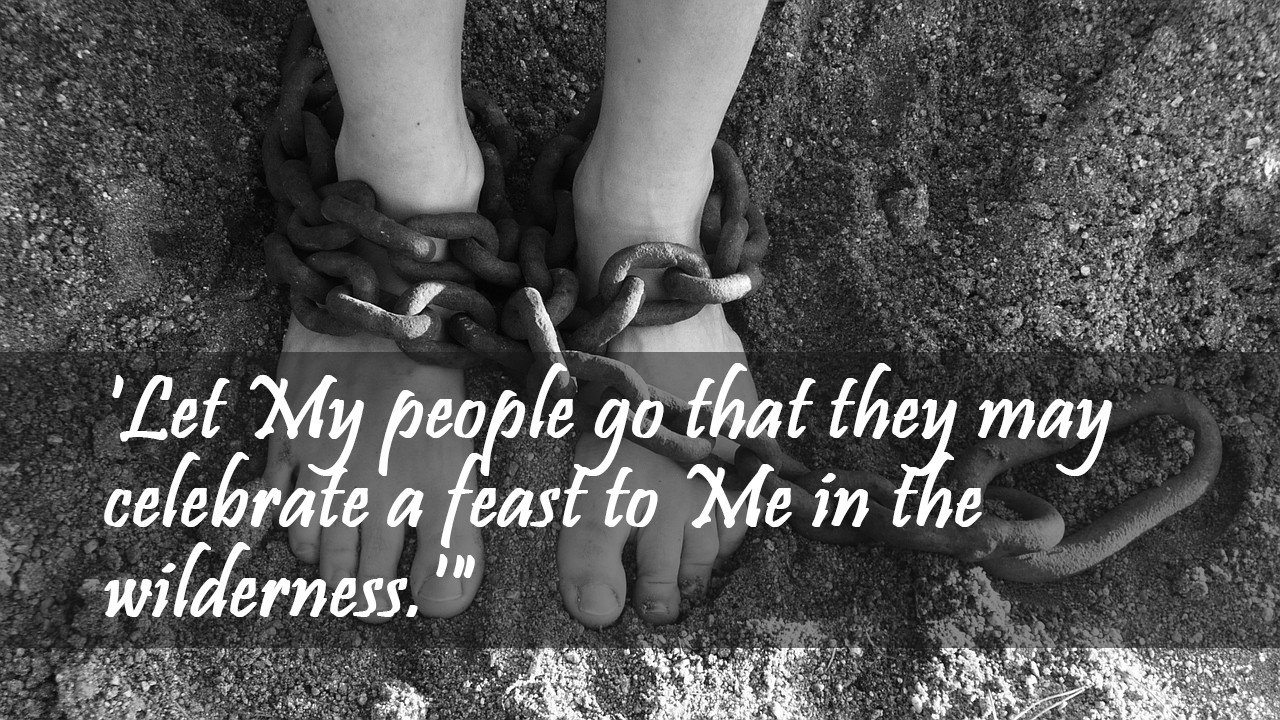 5 Afterward Moses and Aaron went and said to Pharaoh, “Thus says the LORD, the God of Israel, ‘Let my people go, that they may hold a feast to me in the wilderness.’” But Pharaoh said, “Who is the LORD, that I should obey his voice and let Israel go? I do not know the LORD, and moreover, I will not let Israel go.” Then they said, “The God of the Hebrews has met with us. Please let us go a three days’ journey into the wilderness that we may sacrifice to the LORD our God, lest he fall upon us with pestilence or with the sword.” But the king of Egypt said to them, “Moses and Aaron, why do you take the people away from their work? Get back to your burdens.” And Pharaoh said, “Behold, the people of the land are now many, and you make them rest from their burdens!” The same day Pharaoh commanded the taskmasters of the people and their foremen, “You shall no longer give the people straw to make bricks, as in the past; let them go and gather straw for themselves. But the number of bricks that they made in the past you shall impose on them, you shall by no means reduce it, for they are idle. Therefore they cry, ‘Let us go and offer sacrifice to our God.’ Let heavier work be laid on the men that they may labor at it and pay no regard to lying words.”

So the taskmasters and the foremen of the people went out and said to the people, “Thus says Pharaoh, ‘I will not give you straw. Go and get your straw yourselves wherever you can find it, but your work will not be reduced in the least.’” So the people were scattered throughout all the land of Egypt to gather stubble for straw. The taskmasters were urgent, saying, “Complete your work, your daily task each day, as when there was straw.” And the foremen of the people of Israel, whom Pharaoh’s taskmasters had set over them, were beaten and were asked, “Why have you not done all your task of making bricks today and yesterday, as in the past?”

Then the foremen of the people of Israel came and cried to Pharaoh, “Why do you treat your servants like this? No straw is given to your servants, yet they say to us, ‘Make bricks!’ And behold, your servants are beaten; but the fault is in your own people.” But he said, “You are idle, you are idle; that is why you say, ‘Let us go and sacrifice to the LORD.’ Go now and work. No straw will be given you, but you must still deliver the same number of bricks.” The foremen of the people of Israel saw that they were in trouble when they said, “You shall by no means reduce your number of bricks, your daily task each day.” They met Moses and Aaron, who were waiting for them, as they came out from Pharaoh; and they said to them, “The LORD look on you and judge, because you have made us stink in the sight of Pharaoh and his servants, and have put a sword in their hand to kill us.”

To get a better idea of how daring the entire request Moses made to Pharaoh was, it’s important to understand the thinking and theology of the Egyptians.  One who was deemed Pharaoh was considered a child born of the sun.  His power and authority was the final “end-all-be-all” statement and rule.

Having never served as a public servant, he had been served all his life.  He wouldn’t even have known how to do so.  Because his upbringing and ultimate rule had others catering to his needs, all power and authority of the land rested on him.  Legislatively and practically, no one was of equal stature.

An ancient Egyptian temple has the statement given by a Pharaoh chiseled upon it, “I am that which was, and is, and shall be, and no man has lifted my veil.”

Pharaoh was a god to the people and he believed this to be true.

So, when Moses went before the ruler of the land, not only was the request made to let the Israelites go and all the Egyptian slave labor be on hiatus it was an affront against Pharaoh himself.  He had never heard of the true God.

In Pharaoh’s mind, this was not an issue of just slaves taking a trip to worship the Hebrew God; this was an affront on every level of his authority. He does not even know who the Lord is and by his own words, doesn’t know Him.

Today, we encounter more people than not who don’t know God.  They have called the shots in their lives and live much the same as Pharaoh did as the master of their own destiny.  For some, their hearts have been hardened and are not remotely open to His voice.  For others, the idea of laying their lives down before God and allowing Him to be the driving force of their decisions and choices is something they refuse to do.

Moses was following God’s directive even though daunting on every level.  And as God would reveal Himself to Pharaoh in ways unimaginable, He would be doing the same work in Moses for the path He was on.

This is just the beginning of Moses’ journey and, understandably, he’s ready to give up. We often feel like this. God calls us to something, and we try and follow through the best of our ability, but it seems like an impossible feat. To make matters worse, the people who need freeing are now upset with him for stirring the pot. It seems that Moses and Aaron have only made everything worse!

What a great hope this chapter is for those of us who feel we’ve followed God’s heart but haven’t seen the expected results. The reality was, Moses and Aaron needed to toughen up. They had a long journey ahead of them. They needed to trust God instead of complaining to Him the moment things didn’t go their way.

So, God allowed them to struggle. He was going to remind them over and over and over again that His plan would unfold, and that He is always faithful to His word. We must believe there is more ‘good’ that comes through the struggle than through an easy victory. This is exactly what Moses was experiencing!

We often have expectations of God that everything will work out comfortably with no snags or hang-ups. In my experience, those times are rare. I’ve come to a place where I am starting to appreciate the struggle knowing that if I am faithful to walk the path, the journey will be worth it. The immediate destination may not turn out the way I had hoped, but I already know that my final destination will land me in the presence of Jesus for all eternity.