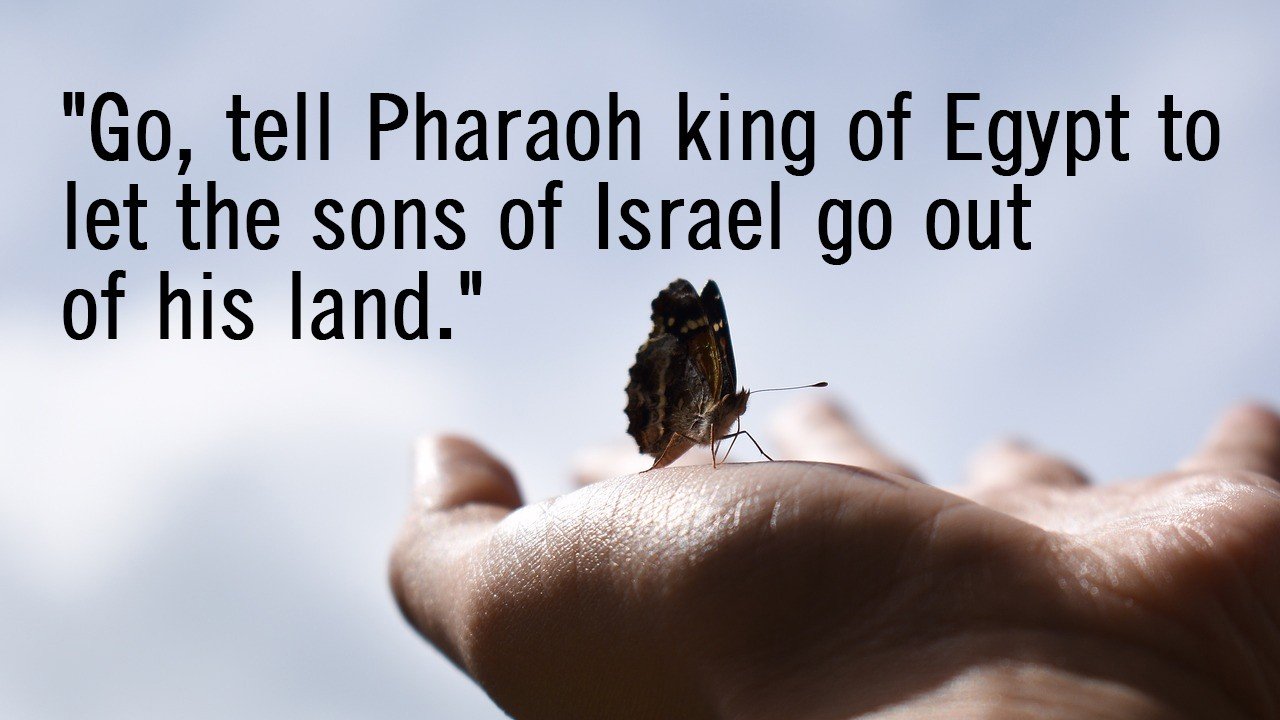 God spoke to Moses and said to him, “I am the LORD. I appeared to Abraham, to Isaac, and to Jacob, as God Almighty, but by my name the LORD I did not make myself known to them. I also established my covenant with them to give them the land of Canaan, the land in which they lived as sojourners. Moreover, I have heard the groaning of the people of Israel whom the Egyptians hold as slaves, and I have remembered my covenant. Say therefore to the people of Israel, ‘I am the LORD, and I will bring you out from under the burdens of the Egyptians, and I will deliver you from slavery to them, and I will redeem you with an outstretched arm and with great acts of judgment. I will take you to be my people, and I will be your God, and you shall know that I am the LORD your God, who has brought you out from under the burdens of the Egyptians. I will bring you into the land that I swore to give to Abraham, to Isaac, and to Jacob. I will give it to you for a possession. I am the LORD.’” Moses spoke thus to the people of Israel, but they did not listen to Moses, because of their broken spirit and harsh slavery.

The Genealogy of Moses and Aaron

On the day when the LORD spoke to Moses in the land of Egypt, the LORD said to Moses, “I am the LORD; tell Pharaoh king of Egypt all that I say to you.” But Moses said to the LORD, “Behold, I am of uncircumcised lips. How will Pharaoh listen to me?”

There are many times God calls us to a task far greater than we believe can be accomplished.  Just think of the prayers you have at the moment along these lines.  So many times, the Holy Spirit brings about a burden in some form toward a situation, a person, a people group that is so far reaching.  There is a reason He chose you to share in this situation.  And although, the proposed outcome or desired effect of where freedom will come to another, or relief or even healing taking place (really you can fill in the blank on whatever the leaning is), God is doing a tremendous work in you.

Sometimes in these matters our own vision and focus leans toward the reality of the situation when God is actually at work behind the scenes.  In such times we must go back to the promises from God we believe to be true.  We must return to the hope found only in God and not a desired result of which we’re praying toward.

“Now you will see what I will do to Pharaoh…” God said.  “I am the Lord.”  God used this moment of questioning to remind Moses of who He was and how He had the ability to do whatever was needed.  In the middle of such questioning, God spoke to Moses that He will absolutely fulfill what He has promised.  It was a promise that began way back with the Patriarchs in His calling of them.  He made a covenant to these men and had not forgotten such promises.  Reminding Moses of this was a reminder He would keep His  covenant with His people.

These promises spoke strongly to Moses but they should also resonate in us.  They give hope beyond the situation we are called to in order that we ourselves will believe God will keep His word. Yes, you may be in the middle of such questioning yourself.  And you may be struggling at the moment to believe and understand what your role is.  Press in to the Holy Spirit.  Seek His wisdom and guidance.  Seek the strength needed for this day.  Pursue relentlessly whatever burden God has given you.  Circle back to His many promises.  He is the Lord.

This pretty much sums up the journey of Moses. Likewise, it may sum up our spiritual lives. God not only reminds Moses of His promises, but He gives him even more encouraging words to work with.

1. God will take Israel as His own people.
2. He will be their God in a very special and exclusive way.
3. The situation with Egypt will make it clear that He is their God and over all things.
4. They will be guided to the Promised Land.
5. Their land will become their inheritance.

All these great things despite what verse 5 says about Israel. They groaned.

“Furthermore I have heard the groaning of the sons of Israel, because the Egyptians are holding them in bondage, and I have remembered My covenant.

Can you believe the grace here? I’ve heard some people comment on how the Old Testament just doesn’t have grace like the New Testament. To an extent that is true because the New Testament has Jesus. But here, we witness an overwhelming amount of mercy and grace on the part of God. Israel, by their actions, has no claim to any of these promises. The only way they will happen is through the Lord. They are not entitled to them, nor can they work to earn them.

Reading a chapter like this reminds me of how much grace I’ve been given. Even when I complained and grumbled, God had mercy on me. He looked at me and overwhelmed me with His presence. He flooded His promises upon me. It’s indescribable.